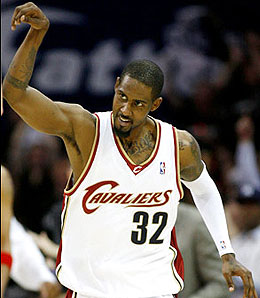 What a shock… Larry Hughes is hurt again.

This is a good time for basketball fans as the NBA is ending its first month of the schedule and things are starting to happen. Tracy McGrady, Vince Carter and Larry Hughes are hurt (as if anyone still owns Hughes); Stephon Starbury isn’t happy, and Shaq sucks more now than ever before. What is worse is that people keep holding onto Shaq as if he is going to suddenly lose some weight, get in shape, and return to when he was Shaq-Fu and not Shaq-Food. I see better options at all positions, and here is what I see.

Grant Hill: Hill is still on many waiver wires and I am not sure why. Sure, he will be streaky with his minutes at times and you never know when his ankle is going to sideline him. But, when he is on the court, he still has the game to hang with anyone. I like Hill in my utility spot with the occasional start in leagues with a max games limit. Phoenix has a fast offense which steads Hill well when he is healthy.

Antoine Wright: For those of you who had John Salmons, it is time to cut him loose and go after a Wright-type player. Vin-sanity is not out too long, which makes Wright a short term pick-up. Don’t take him hoping he is the new starter; rather, he’s a fill-in that would be a good handcuff to Carter.

Bonzi Wells: See above. T-Mac is hurt and Wells is taking his spot. Sure, Wells had a horrible game Friday, but he has shown over his career that he can score when the shots are there. I think he will bounce back and become a very solid short-term option while McGrady nurses his injury.

Nick Collison/Chris Wilcox: These two are splitting minutes, but I like Wilcox more than Collison in most formats. Either one is a better option than Shaquille O’Neal, Andrew Bogut, or any Lakers’ centre at this point. I would cut bait with any of those three for Wilcox if he is available.

Eric Dampier: Another centre who is on the FA list that maybe shouldn’t be. Dampier thinks he is better than he really is, but he is the only Dallas player that even considers going after a rebound or blocking a shot. He is worth a bench spot if you need a centre. It will take him a few weeks to get back up to full speed. But, when he does, he will still be better than some centres I see people starting now.

By James Morris
Tags: Larry Hughes, NBA, Tracy McGrady, Vince Carter
This entry was posted on Saturday, November 17th, 2007 at 6:04 pm and is filed under BASKETBALL, James Morris, The Wire Troll. You can follow any responses to this entry through the RSS 2.0 feed. Both comments and pings are currently closed.