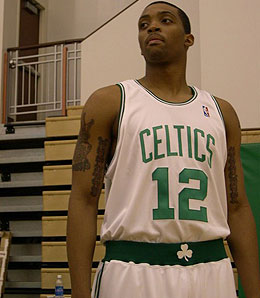 Rookie Allan Ray is looking very strong in the absence of Delonte West.

Everyone is rather used to seeing Jason Kidd rack up a triple-double, so when he did it last night, it was no biggie. But when Vince Carter joined him in the feat, the two became the first teammates to do so in the same game in since Ronald Reagen was just leaving the White House. In today’s Daily Dose, we check in on this pair of New Jersey stars.

T-Mac and Yao are both feeling better; Chris Paul returned and didn’t skip a beat; AK-47 could be toast for the season; and Rip isn’t sweating the small stuff.

Not only do we reveal the secret of how bunnies reproduce so quickly, but we’ve got all of the fantasy basketball news from Saturday’s action in the Daily Dose.

By RotoRob
Tags: Jason Kidd, New Jersey Nets, Ronald Reagen, Vince Carter, White House
This entry was posted on Sunday, April 8th, 2007 at 3:52 pm and is filed under BASKETBALL, NBA Daily Dose, RotoRob. You can follow any responses to this entry through the RSS 2.0 feed. Both comments and pings are currently closed.