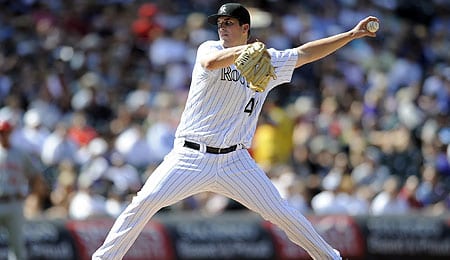 Drew Pomeranz could battle for the NL Rookie of the Year this season.

The 2012 RotoRob MLB Draft Kit carries on today with more of our Top 55 Prospects list. So while you wonder about Ubaldo Jimenez and his need for anger management counselling, let’s review prospects 20 through 11.

20. Drew Pomeranz, SP, Colorado Rockies (47): Pomeranz will be part of a projected young Rockies rotation (except for ancient Jamie Moyer, of course), and while he may not pitch until mid-April (as the Rox don’t need a fifth starter until then) and may deal with an innings cap of 170 this year, he still is a decent candidate to walk away with NL ROY honours. In Pomeranz’s first taste of the bigs last year, he showed good control and probably deserved better bottom line results. The 23-year-old southpaw flashed dominant strikeout rates at High-A and after just five starts at Double-A – split between two teams because of the trade from Cleveland to Colorado (part of the Ubaldo Jimenez deal), Pomeranz found himself in the majors. Now the Rockies’ top pitching prospect, he could top out as a No. 2 starter in the majors with a fastball that can reach 94 mph. He’s a huge-ass lefty (6’5”) with a body that screams ‘durability’ (231 pounds), so he should be an important part of the Rox rotation – both this season and going forward.

19. Danny Hultzen, SP, Seattle Mariners (NR): Hultzen, our 114th-ranked starting pitcher for 2012, was the Mariners’ top draft pick last year (second overall) and he’s wasted no time in living up to the billing. He spurned the D-Backs’ contract offer after they drafted him in 2008, choosing instead to attend the University of Virginia, where he was dominant, setting some key school records and leading the Cavaliers to the College World Series twice. Hultzen is going to begin the season at Double-A Jackson, where he will combine with James Paxton and Taijuan Walker to form one of the deadliest rotations in the minor leagues. Hultzen signed too late to appear in any leagues last year, but he did make his debut at the AFL and was filthy good (1.40 ERA in six starts) in the prospect-laden showcase. A lot of people thought the lefty had a chance to win a rotation spot in Seattle this spring, but he’ll start the year in the minors instead. However, don’t be shocked to see Hultzen arrive in Seattle by the end of May/beginning of June – this kid is that advanced. The Academic All-American stands 6’3” and weighs in at 200 pounds – not an ideal pitcher’s body, but not bad at all.

18. Anthony Rendon, 3B, Washington Nationals (NR): In anticipation of the 2012 First-Year Player Draft, we discussed Rendon’s chances in a Podcast last year. The fact that the Nats recently extended Ryan Zimmerman by six years means that Rendon will not be rushed to Washington. Still, Rendon is advanced enough that he could easily be knocking on door of the majors by, say, August. The Rice product is considered a legitimate five-tool prospect that brings a special bat with above average speed to the hot corner. Rendon has the chance to be a perennial All-Star at third base; the only question is will his impending arrival mean the end of Zimmerman in Washington or will the Nats parlay the youngster into a trade?

17. Manny Banuelos, SP, New York Yankees (NR): The Yanks made a couple of key additions to their rotation this winter, but the presence of fine pitching prospects like Banuelos only adds to what’s become a system strength. The 21-year-old southpaw will begin the season at Double-A, but with the team committed to cutting its payroll below $189 million by 2014, the chances of Banuelos being buried in the minors are remote. Last year, his record at Double-A wasn’t great, but he racked up plenty of innings before heading up to Triple-A, where he definitely held his own, and likely deserved a lower ERA. Now the top prospect for New York (with Jesus Montero getting dealt this winter), Banuelos is about one year away from competing for a rotation spot. He could get his first taste of the Show in September and be given a legitimate shot at earning a rotation spot next spring. Banuelos has front-of-the-rotation potential, and the fact that the Yanks have bought themselves the time to let him fully develop could turn out to be a blessing in disguise.

16. Dylan Bundy, SP, Baltimore Orioles (NR): As we discussed in Part IV of this series, last year was a great year for Oklahoma high school pitchers, of which Bundy was the best. The Orioles’ top prospect will begin his professional career at Low-A Delmarva, where Baseball America’s High School Player of the Year will try to make his mark. A short (6’1”) righty, Bundy’s best offering is his fastball, which can reach the high 90s. His changeup needs work, but is expected to be a plus offering in time. Bundy has the potential to be a workhorse No. 1 starter, something the Orioles desperately need.

15. Wil Myers, OF, Kansas City Royals (24): When we ranked Myers 24th on this list a year ago, we talked about what a big step forward he took in 2010. Well, he moved up to Double-A last year, and while he scored plenty of runs, his walk rate dipped and his slash line dropped significantly. So why has Myers moved up to the top 15 this year? He was simply superb at the AFL last fall, cutting his strikeout rate and batting an eye-popping .360 to put himself right back on track. A stellar keeper prospect, Myers has been on the radar for a few years now, and if he were still a catcher, he’d be way up this list. Even so, his bat will still be extremely valuable as an outfielder.

14. Jacob Turner, SP, Detroit Tigers (31): Turner, who is among our top 140 starting pitchers for 2012, made his big league debut last year, and pitched pretty well in his first start in late-July, but was tagged in his two September starts. He entered camp as the favourite to win the fifth starter job for the Tigers, but got shellacked and then was shut down with shoulder tendinitis. Turner started 2011 at Double-A, and while his record wasn’t good, his results weren’t bad. Detroit moved him up to Triple-A, where he looked better in his brief time there. The Tigers’ top prospect really needs to spend some time at Triple-A, and assuming his shoulder is okay, he will still wind up playing a significant role in Motown before this season is up. Turner’s best weapon is a 94 mph fastball, but his changeup needs improving. He’s a big dude (6’5”, 210) who’s been compared to Matt Morris.

13. Tyler Skaggs, SP, Arizona Diamondbacks (NR): Skagg is another pitcher ranked in our 2012 starting pitcher cheat sheet because we believe he’s got a real chance to contribute this season. Arizona has built up a collection of superb young talent on the mound and Skaggs is near the top of list. Last year, his record at High-A was middling, but his results were sweet, and judging by his phenomenal FIP, they could have been even better. Skaggs was bumped up to Double-A and did even better there, although he did benefit from a higher strand rate. This 20-year-old lefty is going to be the Diamondbacks’ No. 2 starter in time, but will likely begin the season at Triple-A. Part of the package Arizona received from the Angels in the Dan Haren trade, Skaggs is lanky (6’4”) and mechanically sound.

12. Devin Mesoraco, C, Cincinnati Reds (NR): As we’ve discussed, by dealing away Yasmani Grandal and letting Ramon Hernandez walk, it’s clear the Reds believe Mesoraco is their long-term answer behind the plate. In the past four years, two catchers have won the NL ROY award; could Mesoraco keep that trend going? Many believe he is the odds-on favourite for the hardware, heading into the season at least. Mesoraco got his feet wet with a 50 at-bat look late last year in Cincy and while he scored a few runs, he had a tougher time making contact. Still, some in the organization believe that he’s got a chance to be the closest thing to an impact catcher that the Reds have had since Johnny Bench. Cincy’s top prospect will be in a timeshare with Ryan Hanigan to begin the season, but he we expect him to grab the lion’s share of starts as the season progresses. Last year at Triple-A, Mesoraco handled a heavy workload and flashed power, although not as much as he had in 2010. His BA soared, but may have been somewhat helped by a high BABIP. While Mesoraco may not be a major Fantasy asset in 2012, he’s a tremendous keeper league option. The 23-year-old was a late bloomer, really only breaking through two years ago, and while he’ll need to improve his contact rates, he definitely looks MLB-ready, with very few flaws in his game.

11. Trevor Bauer, SP, Arizona Diamondbacks (NR): Bauer is another hurler we ranked in our 2012 cheat sheet, putting him 136th overall to be precise. He’s going to start the season in the minors, but that doesn’t mean he won’t be a big factor this year, perhaps even involved in the NL ROY race. This dude has a boatload of different pitches he can throw and with his solid mechanics, he has future No. 1 starter written all over him. Taken third overall out of UCLA last year, Bauer made it all the way to Double-A and there was some talk he’d even see some time in Arizona in September. He completely blew away his opposition in three starts at High-A, moving up to Double-A, where he had more trouble, but continued to rack up serious strikeout numbers. Bauer has serious talent, but will most likely begin at either Double-A or Triple-A and wait for either injury or ineffectiveness by one of the D-Back starters to open up an opportunity for him. His curveball is off-the-charts good, but Bauer will need to sharpen his command before he’s ready to make his mark. As things stand, he’s come out of college as a pretty polished product already, so it won’t be long at all before he’s in Arizona.