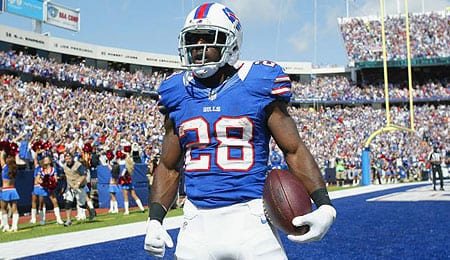 Did we mention that C.J. Spiller went sixth overall?

The 2013 RotoRob NFL Draft Kit nears completion today with our Expert League Draft Report. So while you marvel at Wes Welker’s claims that he was derided by Coach Bill Belichick, let’s see how our draft fared.

The slow (and we do mean slow) draft kicked off July 14 and too two weeks to complete. With the RotoRob war room team assembled via our texting machines and other various friends willing to help we set forth on this grand adventure.

You start 12 players and your roster must consist of one or two quarterbacks, three to five runnings backs, four to six wide receivers and two to four tight ends. There were no kickers or defenses allowed because we experts love to dig deep into the depth charts that truly matter.

We at RotoRob were granted the second overall pick and without hesitation we took Calvin Johnson with our first selection. Adrian Peterson was of course the first pick overall. Megatron is a need to own player and in a PPR paradise, running backs do not float every boat. C.J. Spiller went sixth overall and Jimmy Graham went 12th. In a league in which two QBs can start, the same team took Aaron Rodgers at the end of the first round and Drew Brees at the beginning of the second.

The rest of Round One:

In the first round, running backs were ruling the roost and we felt compelled to join the club in Round Two. We chose youth by taking Chris Johnson over Maurice Jones-Drew. As we mentioned above, in an odd but trending move Spiller was taken sixth overall. We would not trust a guy that does not have a full year of feature back experience in the first round. Johnson is at least stable, barring any kind of major injury.

The rest of Round Two:

In Round Three, Tom Brady was in our crosshairs and we got him. Many so called experts are predicting the Pats to have a down year. No way, we say, Brady is a winner and he elevates those around him. When people say that New England is going to be mediocre that is just fuel on the fire for the Pats. Did we mention C.J. Spiller went sixth overall?

As we neared our pick in Round Four, we decided to go for the best available player regardless position. Lo and behold, we landed last season’s yardage per catch leader, Vincent Jackson. We were pretty happy with a score in Round Four!

Round Five beckoned us to lock up our first tight end. With the g-men gone (Gronk & Graham), Jason Witten was a natural choice. He has perennial 100-catch potential because Tony Romo loves him and his sticky hands further that relationship.

As the long wait continued until our pick in Round Six, it became apparent that we needed another RB, as they were going off the board fast. Montee Ball and Giovani Bernard were discussed, as were Eddie Lacy and Rashard Mendenhall. Lacy seemed to be getting not much love from other experts and we are very much believers in him. Mendenhall (when healthy) can be a solid RB and Carson Palmer will rely on him to eat up the clock. Bernard and Ball were both gone by the time we picked again, so Lacy was our man and as a bonus, Mendenhall fell to us in the seventh round.

Our nervousness surrounding Round Eight was magnified by the draft’s slow moving progress. It was basically an email draft that took place over a couple of weeks. In this league, you can start two QBs and we needed a second. Philip Rivers was our only stream of hope. Let’s hear it for one last hurrah in beautiful San Diego.

As Round Nine came back to us DeAndre Hopkins had us salivating like Homer Simpson on pork chop night. We had been keyed in on him for at least the last four rounds. Potential is always such a tease and Hopkins was one rookie we knew we wanted, so we prayed he would last. The likes of BenJarvus Green-Ellis, Vick Ballard, Mark Ingram, DeSean Jackson (Pre-Jeremy Maclin injury) and Pierre Thomas were still available but Hopkins was our guy. We got him and a few tears shed. Yes, really.

This expert league brought forth the challenge of having to start two TEs. So there we sat in Round 10 and we thinking about drafting a second TE. With Witten already in the fold we felt it was okay to reach a little. Brandon Myers and Antonio Gates we both still out there. We had been watching Martellus Bennett but he scooped up after we got Hopkins. Myers was our pick and we want Eli Manning to know that he will always be open.

As we mentioned, this draft took a while (especially when some owners decided to go for a bachelor party in Las Vegas mid-draft). By Round 11, however, Percy Harvin had yet to get hurt, so when we picked Sidney Rice we weren’t very optimistic. We did know he would at least see some targets. The Harvin season-ending injury news broke the next morning and we traded our morning coffee for whiskey sours (okay, not really… but we were tempted). We had started to fall in love with Alshon Jeffery but he was snatched before we took Myers.

Our Round 12 selection of Jonathan Franklin took place before the news surfaced that Lacy was looking rather plump at camp. We were basically covering our tracks here. Hopefully we grabbed the back that will be featured. We know Franklin will provide speed on the edge at the very least. The too common trend of “running backs are King in Fantasy” basically left the herd anemic. Guys like Jacquizz Rodgers, Michael Bush, Fred Jackson and Shonn Greene were selected before we “settled” for Franklin. Speaking of Jackson, did we mention Spiller went sixth overall?

In Round 13 we chose Santonio Holmes. Seriously? Yup. So what if he’s hurt, we already have our starting core and by the time bye weeks start he will be able to handle a start or two for us.

After some second guessing ourselves on the Holmes pick, we decided to snap up another receiver. So with our Round 14 selection we choose Nate Washington. Tennessee is a team with a plethora of wideouts and Washington might be the third option at best. We were dreaming of red zone targets when we made this selection. Washington seems to possess the kind of vertical talent that can help a red zone offense click.

In Round 15, backups of all positions were being targeted and Marcel Reece was dangling in front of our eyes as our pick approached. We found it unbelievable that the team that took Darren McFadden didn’t think of Reece before we did. Reece is a triple threat, he can run the ball, catch the ball and block with the best. His cleats will be busy.

In Round 16, we continued to stockpile receivers with our selection of Leonard Hankerson. Our Redskin insider told us after this pick that Robert Griffin III is starting to fall in love with Aldrick Robinson, who is buried deep on the ‘Skins depth chart. Hankerson projects as solid number two and with the fragile Pierre Garçon slated as number one, Robinson (who went undrafted) could factor in as well. We do realize Santana Moss also has his very ancient toe in this same pool, so all parties shall be challenged.

With our Round 17 pick approaching we were harshly reminded that we may need draft a third TE, since this league calls for us to start two. We were not the only ones thinking that same thing and that was made obvious by the likes of Scott Chandler, James Casey, Ladarius Green and Jeff Cumberland going before we chose Hankerson. The potential of Tony Moeki engulfed our emotions when we harkened back to his stellar rookie year. Now that KC has added Alex Smith and head coach Andy Reid, Moeki seemed like the only choice to make. Brent Celek, number two on the Philly depth chart, was taken just before our pick. Jacob Tamme and Delanie Walker were the other notable TEs taken after our Moeki snare.

As we entered Round 18, RB depth was a must. With nothing but backups left we felt it okay to draft another Jet. Preliminary reports had Mike Goodson taking the passing downs away from starter Chris Ivory. Goodson is a smart, experienced back with the savvy to move the chains. This is a PPR league and that makes Goodson a gem in a deep/bye week sorta way.

A third QB was discussed as Round 19 trickled like the morning dew off a shady pine. Given that Rivers is our backup, we might not be starting two QBs often. Rivers and Brady do not share a bye and Billy Volek is probably stretch so we stood pat and went with Harry Douglas. As we looked at the settings again it appeared that starting six WRs on a weekly basis was a strong possibility. As a Falcon, Douglas is part of a major Super Bowl contender and even though he doesn’t play every down he still managed just under 400 yards receiving a year ago.

Round 20, the final round, arrived with a beastly bolt of lightning. The last round is usually reserved for kickers or bye week replacement QBs. But, we said ‘what the hell?’ and drafted number five on the Colts RB depth chart, Kerwynn Williams. He reminds us of Darren Sproles, Lionel James and Dave Meggett. He may be a third down or return game mainstay, but Andrew Luck might discover him drifting in the flat.

So how did we do? Let us know in the comments below.

I should have spent a bit more time researching, but with the point scoring system in place, strikeout pitching is a must in this format. Lincecum earned 24 points and that was without getting the win, which is worth an additional 10 points.

For those that want to play the game, but aren’t prepared to make the long-term commitment it is certainly an interesting option. Each participant picks a team of players within a salary cap, and wins (or loses) based on the performance of their players in that night’s games.

The debate is over: Matt Kemp is worth a second round pick. As part of the 2009 RotoRob MLB Draft Kit, we wanted to present you with the results of our league draft. We’re still working away on the remainder of our cheat sheets, including our Master Keeper List, and our fifth annual top 40 […]