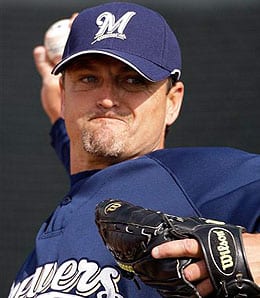 Will Trevor Hoffman be staring down Albert Pujols on April 11?

In just two months, we’ll be watching the season debut of Sunday Night Baseball on ESPN. The lineup for the season has been released, and to whet your appetite from some baseball, I thought I’d reproduce the schedule and toss in some commentary for good measure:

April 4 (Opening Night): New York Yankees at Boston – this rivalry needs no hype or introduction. What a freaking fantastic way to kick off the 2010 season!

April 18: New York Mets at St. Louis – The Cards make a second straight appearance, this time at home against one of the 2009’s biggest disappointments, the Mets. Maybe we’ll get lucky and Johan Santana will be pitching for New York.

April 25: Atlanta at N.Y. Mets – More Mets? Once upon a time, this was a fierce NL East rivalry; let’s hope that can be rekindled this year, but I have a feeling in Bobby Cox’s final season the Braves will be far more potent than the Mets.

May 2: N.Y. Mets at Philadelphia – Okay, enough with the freaking Mets, already. But hey, it’s about time we got a look at the defending NL Champion Phillies.

May 9: N.Y. Yankees at Boston – We’ll be five weeks into the season at this point. How many games do you think will separate these bitter enemies in the AL East?

May 16: Philadelphia at Milwaukee – The Phils are back as ESPN pays its second visit of the season to Beer City. Will Charlie Manuel instruct one of his players to smack a sausage?

May 23: N.Y. Yankees at N.Y. Mets – The Battle for the Big Apple. I can’t believe the Mets are making their fourth appearance on SNB already. Does ESPN look at the standings?

May 30: Texas at Minnesota – Hey, here’s something new. How about AL MVP Joe Mauer facing new Ranger Rich Harden? What’s that? Harden will be on the DL? Never mind.

June 6-27: TBD – ESPN is keeping its options open for these games. Here are my suggestions: June 6 — Los Angeles Angels at Seattle (I’d like to see Chone Figgins against his ex-teammates); June 13 — Chicago White Sox at Chicago Cubs (this is one of the more fun Intra-league rivalries); June 20 – Los Angeles Dodgers at Boston Red Sox (still doing the Intra-league thing, so how about Manny Ramirez in Fenway? Sounds like good times to me); June 27 – Houston at Texas (okay, so it’s not overly exciting, but it’s still a Texas showdown, so you know there will be firearms…er…fireworks).

July 4: Kansas City at L.A. Angels – Apparently, this is the Royals’ first Sunday Night Baseball appearance since 1996. Let’s hope they don’t embarrass themselves.

July 18: Philadelphia at Chicago Cubs – What’s the over/under for Ryan Howard home runs by this point of the season? I’m predicting 26 (not including the two he’ll mash in this game).

Hell, he’s even healthier than he’s been in some time, as evidenced by the fact he’s headed for his most work since 2000. Enjoy the ride, and expect — if possible — even greater success in the second half. Over the past three years, Hoffman’s ERA is three-quarters of a run lower after the break. Now, that counts.