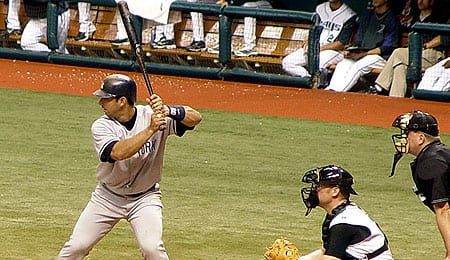 Sure, Jorge Posada (left) can still hit, but many question his defensive prowess, including struggling batterymate A.J. Burnett.

The last time we checked in on the Yankee rotation just over six weeks ago, the front four was dominating and Javier Vazquez was the clear weak link.

Since then, Vazquez has been lights out and it is A.J. Burnett who has replaced him as the worst Yankee starter.

What the hell is up with this dude, Fantasy owners across the land are no doubt wondering.

Well, stories have emerged that Burnett’s struggled have coincided with the leave of absence that Yankee pitching coach Dave Eiland has been forced to take. That’s a nice excuse, but if you’ve followed Burnett over his career, you’ve probably noticed he’s been prone to slumps from time to time.

You could say that a sore foot affected him in Monday’s debacle against Arizona, but that doesn’t explain his other recent poor outings.

And then there’s the long-established and ongoing feud that Burnett has with catcher Jorge Posada. It was directly in the spotlight in the playoffs last season, and has carried over into 2010 now that Posada is healthy enough to catch again. Before Burnett’s latest stinker, Posada himself was quoted as saying “we couldn’t get on the same page,” in reference to Burnett’s previous crappy outing.

I’ll say you can’t get on the same page. I’m pretty sure Burnett would rather pelt you with batteries than be your battery mate, Jorge.

But Posada was not behind the plate for Burnett’s poor start on June 10 in Baltimore. Nor was he catching when Burnett got rocked in Toronto on June 4. He did catch Burnett’s first four starts of the season, two of which were good, two of which were not so good (but not monumentally bad like his most recent two). So clearly, Posada isn’t the problem even though Burnett would probably prefer it if the Yanks would finally bite the bullet and make Posada a DH.

I’m sure the fact that Eiland is away from the team isn’t helping Burnett rediscover the command on his fastball, but come on – A.J. ain’t a kid anymore. He’s been around long enough to know and trust his own stuff, so he should be able to right the ship on his own. And if he doesn’t get his act together soon, don’t be shocked to see the Cliff Lee-to-New York stories appearing with greater frequency. I also wouldn’t be surprised to see Burnett wind up on the DL with an “injury.”

In looking at Burnett’s overall numbers, other than the recent gopheritis, not much jumps out. In fact, Burnett has actually improved his control this season with just 35 walks in 91 1/3 IP. Maybe he’s better as an effectively wild hurler? It’s something to think about at least.

Burnett is winding up on the waiver wire is some extremely shallow leagues, and probably in H2H leagues where owners are streaming pitchers. But in most cases, Fantasy owners are left with no choice but to suck it up and keep Burnett on their bench until he smartens up.

On the plus side, the Yanks will not skip his next start. Burnett is scheduled to face the Dodgers in LA Saturday night, and that could be a good thing as the Dodgers have really struggled offensively in June – especially lately. It’s a pretty good matchup for Burnett, so I think there’s a chance he could snap out of his slump.

But unless you’re feeling extremely lucky or have no choice, you’re better off waiting to see it happen as opposed to having him active for this start.

But the Phillies’ bats were in absentia most of the weekend, dropping the first two games without so much as a whimper from their supposed mighty lumber. On Monday afternoon, however, they finally erupted to the tune of 11 runs and 17 hits, good enough to beat the Jays into submission 11-6 and avert the sweep.