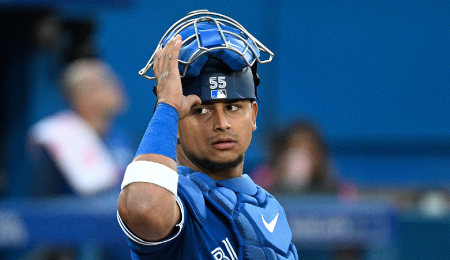 With great sadness, we recently learned that The Fantasy Baseball Guide — a project we’ve been involved with since 2003 — will not be published this year, and could very well be done for good.

Rising printing costs made this venture a long shot for profitability, so unless a huge advertiser swoops in to save the day, it’s time to bid FBG a fond farewell. Special thanks to Peter Kreutzer who drove this project for so many enjoyable issues.

Having said that, the silver lining here is that some of the work we’d earmark towards the magazine can now be funneled directly onto our site.

Heading into the 2022 season, we slotted Moreno No. 26 in our Top 100 Prospects list, pointing out he wasn’t the best fielder, but had an exciting package of tools that would drive his progress.

Sure enough, Moreno took a nice step forward at Triple-A, putting up some impressive counting cats, flashing an advanced hit tool and exhibiting improved contact skills. So when Danny Jansen‘s broken finger in June finally opened up a spot, Moreno was summoned to Toronto to make his MLB debut.

Moreno hit so well that there was speculation that Jansen would be the odd man out when he got healthy. However, Jansen resumed his duties when he came off the IL, so Moreno was farmed back to Buffalo in July.

Moreno got another crack at the bigs after rosters expanded in September, but saw limited PT with the Jays fighting for playoff seeding. Still, the 22-year-old backstop showed enough (.319 BA, .356 OBP through 69 at-bats) that the Blue Jays have some decisions to make this winter.

With Alejandro Kirk and Jansen still under contract, Toronto has an embarrassment of riches with its catching depth. Could one of those two be dealt to open up a spot for Moreno, or will the Jays trade away one of the top prospects in the game for help in another area? You’ve got to know that they’ll be getting plenty of inquiries from other clubs about their three-headed backstop monster.

Either way, it’s clear that Moreno will have a key role in 2023, either in Toronto or elsewhere.

Moreno has been chasing Kirk for three years now. Back in May 2019, Moreno was promoted to Class-A Lansing to take over when Kirk was called up to High-A. And when Kirk arrived in the bigs last year, Moreno tore through Double-A, slowed only by an injury.

Signed out of Venezuela in 2016, Moreno showed how athletic he is when — in addition to his time behind the plate — he also appeared at second base, third base and the outfield during his time in Toronto this year. That kind of versatility may allow the Jays to keep all three catchers and still find each of them enough PT to provide some Fantasy value. Could Moreno act as a super utility option until the catching situation resolves itself?

His 2023 Fantasy value is still somewhat up in the air pending Toronto’s moves this offseason, but regardless of what happens, he’ll be useful next year. Ultimately, Moreno projects as a catcher who can hit for a high average, perhaps in the mold of Joe Mauer, with a lower BA, but slightly more pop. Moreno’s power left something wanting this year (although he did flash some, as you can see in the video below), and he currently projects to have more raw pop than game power. But let’s not forget that just a year ago he bashed eight dingers in just 32 games at Double-A. So at the very least you’ve got to figure he can reach 12 to 15 jacks as a full-time major leaguer in time.

Expect Moreno to go in the 300-325 range in your draft, so very late in standard formats.

Owner of one of the most distinctive voices in music history, Edith Piaf was a French singer active from 1935 through 1963, when she died at the age of 47. In 1951, she recorded “C’est Toi,” featuring American singer Eddie Constantine — who spent the bulk of his career in France.

By RotoRob
Posted in BASEBALL, Player profile, RotoRob, Scouting Report | Comments Off on The Decline of David Fletcher