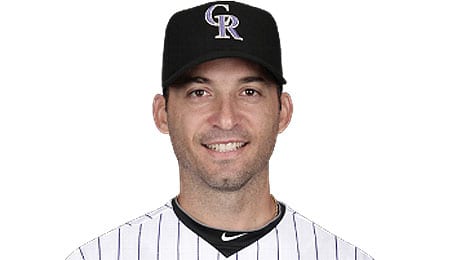 Marco Scutaro should slide over to shortstop with Troy Tulowitzki out.

This week’s episode of RotoRob’s Fantasy Baseball Weekly Podcast (heard every Thursday at 9 p.m. EST on Blogtalkradio) got off to a rocky start as Blogtalkradio was clearly having some issues and none of the guests could join host Buck, who valiantly flew solo for the first 25 minutes or so of the show. Finally, Tim and I were able to be patched in (thanks to Chris Wassel!), but scheduled guest Ivar Anderson was shut out. Thanks so much to Ivar for agreeing to join us; we’ll be sure to get you on again real soon.

Once the dust settled, we managed to tackle tons of Fantasy baseball content, including:

To hear the entire show in its technologically-deficient glory, click play below.

By RotoRob
This entry was posted on Friday, June 1st, 2012 at 5:55 pm and is filed under BASEBALL, Buck Davidson, Podcast, RotoRob, RotoRob's Fantasy Baseball Weekly, Tim McLeod. You can follow any responses to this entry through the RSS 2.0 feed. Responses are currently closed, but you can trackback from your own site.