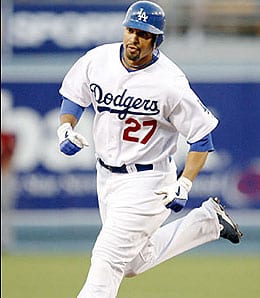 The debate is over: Matt Kemp is worth a second round pick.

As part of the 2009 RotoRob MLB Draft Kit, we wanted to present you with the results of our league draft. We’re still working away on the remainder of our cheat sheets, including our Master Keeper List, and our fifth annual top 40 prospects list.

When doing a draft analysis, I normally spend most of my time reviewing my team and strategy. For this, the second year of the highly competitive RotoRob’s Regulars League, I have decided to take a different approach and do a draft recap by round rather than singing the praises of my many astute choices (cough, cough). The league is a 15-team mixed format using daily transactions.

The rosters are made up of one each of C, 1B, 2B, SS, 3B, 4 OF, 2 DH, 2 SP, 2 RP and 4 other pitchers of one’s choice. We use a four-man bench so in all we go 345 players deep. In larger format leagues, having a sufficient player pool for the waiver wire is imperative in having both a fun and functional league. A fun time was had by all, and the comedy stylings of both Grey Albright and our defending champ Steve Parsons provided a chuckle or two. Let’s now take a look at how this one shook out.

Round One – Kevin Orris went with Chase Utley eighth overall and obviously believes that Utley’s hip is going to be no problem in 2009. The first five off the board were Hanley Ramirez, Albert Pujols, Jose Reyes, David Wright and Miguel Cabrera. The biggest discussion in the early going was no real surprise. Who goes after Alex Rodriguez and when?

Round Two – I can remember just a few weeks back pondering whether or not Matt Kemp is worthy of a second round pick and watching Todd Zola make the decision an easy one. Geoff Stein from Mock Draft Central made it two in a row, grabbing Kemp with the seventh pick in this round. I should have known he wasn’t falling to me in this one. A-Rod went with the 29th overall pick. It’s a decent gamble considering he’s got that September surgery planned when the Yankees fall out of the race. Full marks to Parsons for sticking to his guns on this one.

Round Three – The speed continues to fly off the board with Brandon Phillips, Jacoby Ellsbury, Carl Crawford, Ichiro Suzuki, Alex Rios and Shane Victorino going in the first 10 picks of this round. I’ll take Vladimir Guerrero at 33rd overall as I’ve done in probably too many leagues this year, and pray the off-season surgery was a success.

Round Four – With the third pick of this round, Joey Votto, the young slugging Canuck, went off the board. I was really hoping he’d fall to me at the 12th pick, but the odds were long there. Isn’t it funny how a player becomes a reach only when someone else doesn’t manage to get him? The big three catchers all went towards the end of this round and in a one-catcher format I wanted a top-tier option. Geovany Soto, welcome to Team McLeod for 2009!

Round Five – It was time for the inevitable closer run and Jonathan Papelbon, Joe Nathan, Francisco Rodriguez, Mariano Rivera, and Joakim Soria disappeared off the board in that order. Parsons managed to grab Dan Haren; now that’s a shocker. Five bucks says he’s already queued up Milton Bradley.

Round Six – Bob Sikon from Fantasy Baseball Trade Market picked Victor Martinez as the 11th pick of this round (86th overall). I like the potential for a rebound here. The Gas House boys jumped in with one of the big early speculative picks by grabbing Nelson Cruz with the fifth pick.

Round Seven – Nine of the 15 picks this round went the starting pitcher route, with a couple of closers tossed in for good measure. I take Aubrey Huff. Well I never was one to follow the beaten path so why start now?

Round Eight –Again, another round dominated by pitching, with Cliff Lee going as the sixth pick in this round. There are not a lot of believers in a repeat of that stellar 2008, but this is a nice potential bargain nonetheless. Derek Jeter went third in this round; oh how the mighty have tumbled. I like the 12th pick in this round in Carlos Delgado. I think he’s got one more good year left in the tank, so 30 plus homers in Round Eight makes for a solid buy. Another of the speculative picks went when Pablo Sandoval disappeared off the board. That position flexibility could be a nice option as the year progresses.

Round Nine – After eight consecutive bats it was time for me to take a look at pitching. I was pondering both Ricky Nolasco, who went later in this round, and Daisuke Matsuzaka and went for Dice-K with the 123rd overall pick. This wasn’t a big surprise as I have to have at least one former NPB guy on my squad or I tend to get a little cranky. Four more potential closers in Kerry Wood, Carlos Marmol, B.J. Ryan, and Bobby Jenks went this round. The pickings were starting to get a bit slim in the closer department.

Round 10 – Chris Mulligan, who officially took over when Orris from FantasyPros911 developed computer issues, officially declares victory in the fight for Mike Aviles. It’s time for me to surrender and wave the old white flag. After doing battle with Orris in countless mock drafts this winter over the rights to be bragging about Aviles of the Royals, I officially lost the war.

Round 11 – I think I should be looking pretty solid in the speed department by picking Adam Jones with the third pick in this round. It was possibly a bit early to reach for Jones, but after watching the earlier trends in this draft I figured it was now or never. Toss in Jose Reyes and Chone Figgins and my team should be a top contender in the speed category. Five more closers, or sort of closers based on the early season dynamics, went at the back end of this round in Francisco Cordero, Brian Wilson, Kevin Gregg, Frank Francisco and Heath Bell.

Round 12 – Milton Bradley goes with the sixth pick in this round and I can hear the sobbing coming out of Portland. Parsons must be contemplating Plan E at this stage. Matt Wieters, the young Orioles catching phenom, finally disappeared with the 167th overall pick. As mentioned before, it is a one-catcher league so if one can find a substitute to make it through the first six-to-eight weeks of the season, this could end up being a fine play.

Round 13 – Kevin and Geoff end up doing battle by picking Chris Perez and Jason Motte back-to-back. Someone is going to be much happier than the other with these two picks. I gambled on Erik Bedard hoping to get at least a month or two of quality starts before he heads off to surgery. If Adam LaRoche ever shows up for the first two months of the season, our regular guy from the east coast could end up liking that pick.

Round 14 – The bottom of the barrel closers started rolling out with Matt Lindstrom, Troy Percival, and Chris Ray going. The FantasyPros911 crew continued the KC love theme, drafting Alex Gordon, and Sikon snuck in with a solid pick in Paul Konerko. I like the potential there. Mock Draft Central also managed to take a huge leap forward in the stolen base category by grabbing Willy Taveras mid-round.

Round 15 – Cory Humes from MVN managed to get the round started by grabbing another excellent bounce-back candidate in Fausto Carmona. If this spring is any indication of what lies ahead he could be a huge steal at this stage. Chien-Ming Wang goes at the end to Albright, and I have to admit he’s assembling a very solid team for Razzball. Coco Crisp goes to you-know-who. I’m waiting anxiously for that John Buck pick in the next several rounds.

Round 16 – Todd Habiger from RotoRob.com jumps in and grabs Kenshin Kawakami, shortening my queue. I really thought he’d sit another round but c’est la vie. The Denard Span pick this late also caught my attention. The potential for solid numbers in both runs scored and stolen bases this late makes this a rather attractive pick.

Round 17 – Considering my bullpen consisted of Joel Hanrahan, I figured I better start working on saves so I grabbed Manny Corpas this round. Did I mention that I was going to gamble and use both the end play and waiver wire to build my bullpen this year? I’m definitely putting my money where my mouth is with this team. The Billy Butler and Ryan Spilborghs picks this round have some solid upside potential.

Round 18 – Jason Giambi and Travis Hafner went back-to-back in this round. Each are solid speculative picks at this stage of the draft.

Round 19 – Elvis Andrus has finally left the building as the chase for some cheap steals continues. The question is can he make it to first base? There were some very interesting picks this round that saw Juan Pierre, Casey Blake, David DeJesus, Aaron Hill, Mike Fontenot, Paul Maholm and Fred Lewis all disappearing. Each of these players has some very nice upside potential entering 2009.

Round 20 – We’re heading for home and I like the Mark Buehrle pick. Nothing fancy, but steady as she goes. Habiger does something that I’ve rarely seen him do — he actually stayed awake into the later rounds and went with Colby Rasmus with the pick immediately preceding mine. Don’t count your chickens before they hatch is said for a reason. Nice pick, Todd.

Round 21 – Dave McBride of Full Mountie fame, last year’s runner-up, jumped in with Jesse Litsch of the Jays. He’s not going to give you a ton of strikeouts, but should be a good provider in Wins, ERA, and WHIP. I like the Skip Schumaker pick this round and the closer wanna-bes continued to move as Ryan Franklin, Dan Wheeler, Jon Rauch, and Todd Coffey all found homes.

Round 22 – If Mark Teahen of the Royals can get the glove work down and finds a way to qualify at second base, he could be a huge asset this year. He’s a nice gamble for this late in the draft.

Round 23 – The end is upon us, as we close in on the two-hour mark. Caution was thrown to the wind as the Gang drafted looking to create space for that first waiver wire move. Aaron Cook could work out well for the MDC team. I got sucked in again by the annual low WHIP totals of David Bush, but what the heck? It is, after all, the 23rd round.

Recap – Overall, my team leaves me feeling fairly content. I procured my speed, a decent power base and stuck to my guns and gambled on closers and potential closers at the end. The waiver wire needs to be my friend in 2009. The speculative picks went pretty much where I anticipated they would. No serious bargains were to be had, and none should have been with as skilled a group as this one. Congratulations are in order for a job well done, and here’s wishing all the fine participants in this year’s league good fortunes as we head into the start of the regular season.

You can find the full draft results here.

By Tim McLeod
Tags: Matt Kemp
This entry was posted on Friday, April 3rd, 2009 at 11:13 am and is filed under 2009 RotoRob MLB Draft Kit, BASEBALL, Expert leagues, Tim McLeod. You can follow any responses to this entry through the RSS 2.0 feed. Both comments and pings are currently closed.