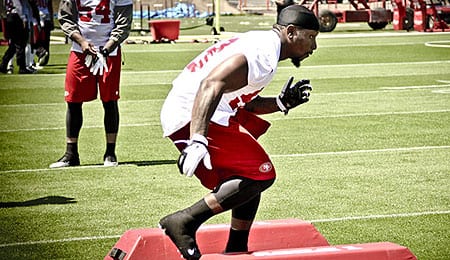 NaVorro Bowman emerged as an All-Pro in 2011.

We’re back today with another batch of the 2012 RotoRob NFL Draft Kit.

All right, we’ve all heard the time-honoured Fantasy advice concerning your team defense: wait, wait and wait a little longer before making your move on draft day. The problem with some of these ancient axioms is that they were forged back in the days when Fantasy defenses accumulated points for sacks, turnovers, defensive touchdowns and – maybe – special teams’ scores. Times have changed, and so should your Fantasy strategy when it comes to team defenses.

Many Fantasy leagues have implemented new scoring systems that award points for yards and/or points allowed, and some groups have accorded additional weight to the traditional defensive team categories. The moral of this story: Read your league settings before crafting any — yes, any — draft-day strategy. While we’re not advocating that you grab your Fantasy defense before filling out your position players and securing some bench depth, there may be times when you want to grab a solid D that’s still on the board because… you guessed it, everyone else in the league is waiting to draft their defense.

While most Fantasy owners grab a team defense and ride it through thick and thin, it’s a viable strategy (if your league has the available roster space) to snag a pair of mid-level defenses and play the matchups. Keep strength of schedule in mind as well, as some rather pedestrian defensive units are blessed with a very favourable draw this season. As always, know your league settings and don’t be afraid to pull the trigger on a top-tier defense if the price is right.

So while you marvel at Drew Brees’ new mega contract, let’s examine the top 25 team defenses in Fantasy football for 2012.

The San Francisco 49ers finished fourth in total defense, second in scoring defense, and tied for the league lead with 38 takeaways last season, and there’s no reason to believe that they won’t be an elite unit again in 2012. Linebacker Patrick Willis receives most of the attention, but NaVorro Bowman was the better Fantasy player in 2011. The Philadelphia Eagles brought in safety O.J. Atogwe to shore up the back end of their secondary, and traded for former Texans linebacker DeMeco Ryans, who could be a huge IDP sleeper at the mike if he can stay healthy. The Eagles tied for the league lead with 50 sacks last season, with Jason Babin leading the way with 18 takedowns. Remember that whole “know your league settings” thing? Well, the Pittsburgh Steelers led the league in both scoring and total defense in 2011, but they posted a league-worst 15 turnovers, rendering them rather impotent in many formats. That figures to change this season, and the Steelers should again field one of the league’s better Fantasy defenses.

The Chicago Bears typically put up a fair number of turnovers, and their seventh-best finish in total defense last season makes them a solid and safe Fantasy option. Bump them up a tad if your league rewards special teams’ touchdowns, as we hear that Devin Hester guy is pretty good. The Green Bay Packers were an elite defense two seasons ago, and tied for the league lead in turnovers last year, but their penchant for giving up huge chunks of yardage and points aplenty doomed their Fantasy owners in many formats. The Pack plays the second-softest schedule in 2012, though, so look for a huge rebound. The Baltimore Ravens always seem to cobble together a strong defense, but the loss of 2011 AP Defensive Player of the Year Terrell Suggs for at least the first half of the season makes the team a risky pick indeed. If you’re looking for a nice sleeper pick, look no further than the Houston Texans, who finished second in total defense and sixth in sacks a year ago. The Texans should be solid again in 2012, and their cushy schedule gives them plenty of Fantasy upside.

The New York football Giants are known for getting to the opposing quarterback and the team’s 48 sacks in 2011 was good for third-best in the league. When opposing passers stayed upright, though, they were very effective, sinking the G-men to 29th against the pass and 27th overall. A healthy Justin Tuck should help right the ship, as he’ll team with new star Jason Pierre-Paul (16.5 sacks) to give the Giants a pair of devastating bookends on the front four. The Big Apple’s other team, meanwhile, finished fifth in total defense last season, and produced enough sacks and turnovers to be an every-week Fantasy starter. The Jets will be solid on D as long as Rex Ryan is at the helm, and the addition of safeties Yeremiah Bell and injury-riddled LaRon Landry could make an outstanding unit into an elite force in 2012. The Seattle Seahawks finished a surprising ninth in total defense last season, and they could improve this season if someone steps up to fill the departed David Hawthorne’s shoes at the mike ‘backer.

The Detroit Lions defense did not vault into the realm of weekly Fantasy starter as many pundits had predicted last season, due in no small part to the lackluster play of defensive tackle Ndamukong Suh. This is still a solid unit, though, and if Suh can regain his 2010 form the Lions could be a nice surprise in 2012. The Buffalo Bills signed D-linemen Mario Williams and Mark Anderson to bolster their anemic pass rush, and suddenly this team’s front seven looks rather scary. The Bills also play the league’s third easiest schedule, and make for a great matchup play when they’re facing a cupcake opponent. New England has things even easier, as they face the easiest slate of opponents in ’12. Linebacker Jerod Mayo suffered through an injury-riddled 2011 campaign, but this is the same guy who piled up 175 total tackles in 2010.

Cincinnati finished a shocking seventh in total defense last year and fifth in sacks with 45. This unit lacks star power, but the Bengals could sneak into the top-10 Fantasy defenses if they can just generate more turnovers (only 22 in 2011). Atlanta’s defense is good but not great; its favourable 2012 schedule, though, makes it worthy of consideration as a matchup play. Dallas boasts one of the game’s top sack artists in DeMarcus Ware, but the team’s leaky secondary needs to be patched before it can regain its former Fantasy glory.

The Arizona Cardinals are lacking in upside, but their 42 sacks and decent return game make them a viable matchup Fantasy option. Linebacker Daryl Washington looks like an emerging IDP star. Kansas City spent the 11th overall draft pick on massive defensive tackle Dontari Poe, who will seek to help the Chiefs improve their number 26 finish against the rush last season. Don’t forget about safety Eric Berry, who racked up 92 total tackles, two sacks and four picks in 2010, but missed almost the entire 2011 campaign with a torn ACL. San Diego managed only 32 sacks and produced a mere 21 turnovers in 2011 and its tough 2012 schedule relegates this once-great unit to Fantasy backup status. The Miami Dolphins finished a respectable ninth in total defense and tied for fourth in sacks last year; there is some Fantasy upside here as the ‘Fins move back to a base 4-3 alignment.

Minnesota features a couple of IDP beasts in defensive end Jared Allen and linebacker Chad Greenway, but overall this is an aging unit that figures to be on the field an awful lot given the Vikes’ anemic offense. The Broncos have one of the league’s most exciting young defenders in linebacker Von Miller, who compiled 11.5 sacks despite being limited by a thumb injury the last five weeks. The Tennessee Titans were once one of the league’s best defenses, but these days this unit is a shell of its former self. The fact that the Titans play the league’s fifth-easiest schedule, though, could present some decent matchup opportunities. The Browns were tough against the pass but awful against the run last year, and a brutal 2012 schedule won’t help the team’s Fantasy (or real-life) cause.

The Grandy Man handled southpaws like never before in 2011, smacking out an absurd 24.6 HR/FB rate. While he’s only a career .226 hitter against lefties (with an equally underwhelming 685 OPS), he somehow managed to post a .272/.347/.597 slash line against portsiders in 2011. Granderson obliterated his career highs in runs (136 – previous best 122), homers (41, up from 30) and RBIs (119, from his old high of 73) last year, and it’s tough to buy in on the sustainability of that kind of breakout. Granderson should be very good again, especially in the potent Yankee lineup, but be careful not to expect a repeat of his gaudy 2011 numbers.

The Wire Troll: Rex Grossman Getting it Done

Well, here we are: Championship Week. If you’re still with us, congratulations on making it to the top of the mountain. Well, not exactly the top; there’s some other bloke standing on the other side of the peak with a stupid grin on his/her face, thinking that they have some claim to your prize. Your Week 16 task: Remove that grin, eject the aforementioned bloke and enjoy the view. It’s been a long, hard path to the top, and we’re not about to stop now, are we? Let those other losers count the days until pitchers and catchers report; for us, it’s still all about football. There are still some sneaky options out there on the wire that can help turn the tides of fortune even here in the 11th hour, so don’t be afraid to make a grab for the flavour of the day. Ummmm… tastes like… victory.

The Wire Troll: The Emergence of Jake Locker

Though Locker came up five yards short of a victory, his performance was impressive enough that he may earn the start Sunday against the woeful Indianapolis Colts. Locker has a cannon for an arm, and the rookie should be able to amass some decent numbers against Indy’s soft secondary. Consider adding him in two-quarterback formats and he’s a must-add in dynasty leagues.

The Wire Troll: The Return of Kevin Kolb

With Forte on the shelf and the Bears’ passing attack lethargic at best, Barber figures to see a fairly heavy workload for at least the near future. That may not translate into big Fantasy points, though, as Chicago will face plenty of eight-man fronts if it can’t get the aerial game going. Barber is a capable back, though, and should be a decent flex option as long as Forte is sidelined.