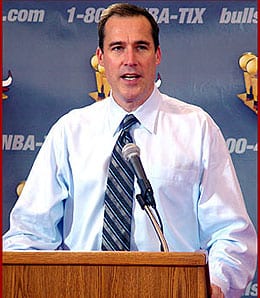 While the Chicago Bulls have ridden a better offense to slight improvements over last season, they have failed to garner any real momentum this season. In fact, judging by their month-by-month record (1-1 in October, 7-8 in November, 6-9 in December, 7-9 in January and 2-3 so far in February), this team is maddeningly and consistently middling. The Bulls tend to have a nasty habit of finding ways to lose, and turnovers have been a problem. Sure, they are good enough to be within striking distance of a playoff spot after missing out on the postseason last year, but it’s also a small wonder why GM John Paxson is rumoured to be ready to resign from his post.

The last time we checked in on the Bulls, it was pretty well the same story, but the good news is it won’t take a big push to make a real difference for them given the middling nature of the Eastern Conference. They enter the break just two games back of the eighth place Bucks, setting up a big game in Milwaukee on Wednesday to kick off the unofficial second half of the season. Despite losing three of its last five, Chicago has been holding its own lately, keeping pace with both the Bucks and Nets and even pulling within striking distance of the slipping Pistons. Chicago has recently passed the slumping Knicks and has managed to put a wee bit of distance between itself and the rest of the Eastern Conference also-rans.

Point guard Derrick Rose, the No. 1 overall pick last year, has proved to be all that in his rookie season, spurring a nice improvement in Chicago’s offensive game. There remains plenty of room for growth here, as it’s still a somewhat middling offense, but at least they are headed in the right direction. The defense, however, is another story. In two short seasons, the Bulls have gone from having one of the truly elite defenses in the NBA under defensive whiz Scott Skiles to being saddled with one of the worst Ds under new head man Vinny Del Negro. And this, is a nutshell, is why the team’s overall improvements this season are extremely modest.

Tyrus Thomas, whom we recommended last month, has been living up to the hype lately, entering the break with a streak of nine straight double-digit scoring games, including five double-doubles. While the recent turnover binge (11 in the past two games) hurts, Thomas has been providing superb overall value, and needs to be picked up if he’s still out there on the wire in your league. Given plenty of PT with Drew Gooden out, Thomas has shot the ball much better this month, and he’s put it all together, proving he can help you in points, boards, blocks, steals and FG percentage. He’s avoided a major injury so far this season and has taken a big step forward as a force on the glass. Even when Gooden returns (although surgery remains a possibility there), I’m expecting Thomas to maintain his value. Sure, he’s still learning on the job, and has come under fire for his missed defensive assignments at times, but the upside remains huge for Thomas.

Ben Gordon also enters the break on a real run, averaging 28.7 PPG in the last three after shooting 10-of-21 from the field and 14-of-16 from the field for a game-high 34 points on Thursday. He slipped in January, but has ridden some hot perimeter shooting (he’s sinking 48 per cent of his five attempted treys per game) this month to a stellar 25 PPG in February. For the season, Gordon is now up to 45 per cent from the field, a nice improvement over last season’s effort, and that’s helped him return to the 20+ PPG territory. Better yet, he’s re-emerged as a serious clutch player, saving his best for late in the game.

As mentioned previously, Rose has been tremendously impressive, doing enough to earn consideration for a 2008 RotoRob Award as Fantasy Rookie of the Year. There’s some concern about the amount of pressure on him as a rookie PG, but he was showing no signs of hitting the wall as we reached the break, averaging 21 PPG over the past four games and shooting particularly well (58.6 per cent) in the last two games. Rose hasn’t done quite as well getting to the line in the past couple of months, but he’s compensated for that by shooting better once he does make it to the charity stripe. Despite the huge competition in such a phenomenal rookie class, something tells me that the Skills Competition trophy won’t be the last piece of hardware Rose hoists this season.

One Bull we expected to be a potentially useful reserve this season is Thabo Sefolosha, but his PT has been on the decline big time of late. And given that he only played six minutes Thursday yet managed to commit the turnover that led to the game-winning shot for Miami, I’m not expecting Sefolosha to carve out more action for himself any time soon. He’s been discussed in trade rumours, and at this point, that’s the only chance he’ll have to emerge with fantasy value this season.

Andres Nocioni, on the other hand, has provided some fantasy value off the bench for Chicago. We recommended him just before the New Year, when he was getting hot, and recently, he’s been on a similar streak, scoring double digits in points in six straight games until Thursday. Be aware that Nocioni’s PT has dipped the past couple of months, but he’s maintaining his value right now by shooting extremely well from beyond the arc. Once his percentages normalize, he won’t be nearly as useful. The fact is, Nocioni’s value has been in decline the past couple of seasons, as he’s become a less and less important part of the Bull offense. Once a key component of the team’s long-term rebuilding plan, Nocioni would now probably best be served by starting over elsewhere.