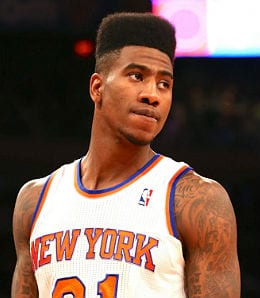 Iman Shumpert is benefiting from the Triangle Offense. (Bleacherreport.com)

With just over a week in the books of this young NBA season, Fantasy basketball is almost in full swing, so it’s time to hit the waiver wire and load up your team for the marathon that lies ahead. Welcome to another season of The Wire Troll, our weekly Fantasy basketball waiver wire column in which all players we recommend are available in at least 50 per cent of Fantasy leagues.

Iman Shumpert, PG/SG/SF, New York Knicks (ESPN: 41.2 per cent; CBS: 43 per cent): Shumpert, slotted 21st in our Shooting Guard Rankings, is currently starting at SG for the Knicks and averaging 28 minutes a game. His numbers aren’t great, but are consistent. Shumpert is one of the players benefiting from the Triangle Offense Coach Derek Fisher is trying to run. Shumpert is quite valuable because he is eligible at three different positions, although we think that he could lose SF eligibility sooner rather than later. He can definitely ball, as he showed at the Nike Chi League Pro Am this summer (see video below).

Evan Fournier, SG, Orlando Magic (ESPN: 16.9 per cent; CBS: 30 per cent): Fournier has looked really good this season and will start for at least the next month while Victor Oladipo is out. With the performance Fournier is delivering, he could be the sixth man even when Oladipo returns. It doesn’t look as if the Magic got worked in that trade as we initially thought.

Randy Foye, SG, Denver Nuggets (ESPN: 4.3 per cent; CBS: 22 per cent): Foye has emerged as the sixth man in Denver and on Friday he actually saw more minutes than starting two-guard Arron Afflalo, who went scoreless in 31 minutes. Foye, meanwhile, has scored 47 points (including a game-high 28 Friday) with eight treys in the last two games combined. On Friday, he also dropped nine dimes and had a block. We tweeted a heads up about Foye on Friday afternoon, and then he went out and made us look like geniuses.

Mike Dunleavy, SF/SG, Chicago Bulls (ESPN: 9.6 per cent; CBS: 35 per cent): Dunleavy’s 30.3 minutes per game should go down, but his production — especially from the field — should not. He is a good three-point boost to your team and definitely is a player that should always be tracked. There is no way Dunleavy should be owned less than Doug McDermott.

Courtney Lee, SF/SG, Memphis Grizzlies (ESPN: 35.9 per cent; CBS: 36 per cent): Lee, who we slotted 43rd in our Shooting Guard Rankings, also qualifies at SF, hence his inclusion here. He sure isn’t showing any ill effects after missing a couple of games with a concussion, averaging 19.5 points in the two games since returning. Lee’s shooting has been lights out — 14-for-22, including an otherworldly 7-of-8 from downtown — so we’re thinking he should get his bell rung a bit more often.

Patrick Patterson, PF, Toronto Raptors (ESPN: 0.3 per cent; CBS: 17 per cent): Patterson is getting a chance to start with Amir Johnson (ankle) out, and it’s unclear if Johnson will be ready to return Sunday. In the meantime, Patterson — a dude we recommended in January and wound up being a solid choice — has been putting up some decent scoring numbers, canning treys and pulling down some boards. He’s inconsistent, but as a pick and play Sunday against the woeful 76ers, he could prove to a very astute choice.

Boris Diaw, C/PF, San Antonio Spurs (ESPN: 9 per cent; CBS: 28 per cent): Diaw is off to a nice start again. He is worth a roster spot because he is consistent and will get a decent amount of starts this season with Tim Duncan getting handed his share of DNP-Old. We are just a week into the season and Duncan’s already sat once. Could Duncan actually sit out a game a week this season? It wouldn’t shock us, and Diaw would be one of the main beneficiaries of this scenario.

Henry Sims, Philadelphia 76ers (ESPN: 1.4 per cent; CBS: 22 per cent): Sims, who we slotted 30th in our Centre Rankings, has been quiet early on, but he sure showed signs of life Friday, canning 7-of-10 from the field (including nailing his only attempt from beyond the arc) for 16 points with eight boards and a sweet five assists. When he starts, as he has done four times through the first six games, he’s worth monitoring. Now let’s just see if Sims can build on his breakout game.

By McCade Pearson
Tags: Iman Shumpert, NBA
This entry was posted on Saturday, November 8th, 2014 at 5:10 pm and is filed under BASKETBALL, McCade Pearson, The Wire Troll. You can follow any responses to this entry through the RSS 2.0 feed. Both comments and pings are currently closed.