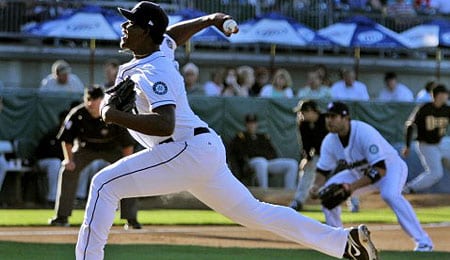 The patchwork rotation that the New York Yankees put together last year somehow was actually more than passable, but there’s no way the team was going to roll the dice again this season.

So off they went and signed Hiroki Kuroda and traded for Michael Pineda, giving them the following stable of arms in which to create a rotation: CC Sabathia, Ivan Nova, Kuroda, Pineda, A.J. Burnett, Phil Hughes and Freddy Garcia.

Now toss in the minor league pitching talent this team has at the upper levels, including coveted prospects Manny Banuelos and Dellin Betances – both of whom will begin 2012 at Triple-A and need to improve their command to take the next step – plus David Phelps, Adam Warren, Brad Meyers and D.J. Mitchell.

Kudos to the damn Yankees, who have turned an organizational question mark into a serious strength, while the BoSox continue to have serious questions about their pitching depth.

Arming themselves with this depth also means that Banuelos and Betances will both now have the time they need to develop, which can only improve their chances when they do finally arrive in the Show.

Interesting factoid: of the 25 players who have mashed 500 or more career home runs, just four of them were shorter than six feet tall: Willie Mays, Mickey Mantle, Mel Ott and Gary Sheffield. At 5’9”, Ott was the shortest player ever to slug at least 500 big flies. The tallest? A tie between Big Mac and the Big Hurt as both Mark McGwire and Frank Thomas checked in at a lofty 6’5”.

The Chicago Cubs have had two 100-loss seasons in their lengthy history, and both came within a span of five years (1962 and 1966). Last year, they suffered 91 defeats and in this upcoming season of rebuilding, it’s quite conceivable that they will put up their first triple digit loss effort in nearly half a century. What do you think, Cubs’ fans? Is your team headed for 100 losses in 2012?

The Washington Nationals, on the other hand, are on the rise a season after coming within one game of a .500 record. The improvements they made this offseason, adding Gio Gonzalez to a young rotation that already includes Stephen Strasburg and Jordan Zimmermann, plus improving their bullpen by penning Brad Lidge – not to mention the impending arrival of prospect Bryce Harper – has positioned the Nats to become a winning team this season. I’d be surprised if they don’t reach 85 wins, a total that could have them competing for a playoff spot – especially if another Wild Card spot is added for 2012 as Commissioner Bud Selig is desperately trying to arrange.

Over in Detroit, with the signing of Prince Fielder the Tigers have made their own move to try to take it to the next level. The Cats’ modus operandi this season is to bash their way to the World Series… this isn’t a club designed to steal bases or play little ball, really. But hey, you know what they say” “Chicks dig the long ball.”

Don’t forget to join Buck, Tim and I every Thursday at 11 p.m. EST for RotoRob’s Fantasy Baseball 365 Podcast, where we analyze the latest happenings in the world of baseball and let you know how it all affects your Fantasy teams. You can tune in here.

By RotoRob
This entry was posted on Sunday, January 29th, 2012 at 3:56 pm and is filed under BASEBALL, MLB Today, RotoRob. You can follow any responses to this entry through the RSS 2.0 feed. Both comments and pings are currently closed.