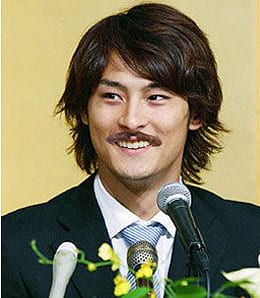 The 2012 RotoRob MLB Draft Kit continues today with a look at our picks for the top prospects in the game. In this, our eighth annual list, we’ve again beefed things up this year – going 55 deep for the first time. As we did last year, we’re breaking this file up to make it easier to digest – and to build drama!

So while you wonder what the hell Chipper Jones is thinking saying he doubts he’ll make it through the season without getting hurt and then saying he was just joking, let’s begin our prospect tome with numbers 55 through 50.

This season, we’re up to 18 returnees from our 2011 rankings (a slight increase from 16 returnees last year), while just 20 from last year’s Top 50 prospects graduated to the bigs (down from 21 grads last year). The number of prospects that fell off the list this year soared from eight to 12 – vastly larger than usual. The upshot is a record 37 newcomers, which is partially explained by the expansion from 50 to 55 prospects this season.

Now go get yourself a java and then sit down to enjoy Part I of our tome of prospects.

55. Yu Darvish, SP, Texas Rangers (NR): Perhaps you heard a thing or two about Darvish’s signing by the Rangers this winter. Perhaps you even heard us talking about it on a Podcast a couple of months ago (and pretty much every week since). The Japanese hurler is a large man (6’5”, 216), which helps alleviate some of the injury worries that normally follow when NPB pitchers move to a more frequent pitching schedule in the majors. The 25-year-old was nabbed by Texas after it set a record with a posting fee of $51.7 million, and now he’s got to provide the Rangers with a return on their investment. Considering he can throw six different pitches with a ton of movement, Darvish definitely comes armed with a serious toolbelt. Now if he can just avoid becoming the next Dice-K, we’ll be on to something.

54. Trevor May, SP, Philadelphia Phillies (NR): Several experts aren’t as bullish on May as we are, but after he broke through with a double-digit win effort at Class-A, he’s cracked our list this season. His strikeout rates are very exciting, and he also made big strides in improving his control last year. May’s been extremely stingy with the gopher ball and this 21-year-old righty has a perfect pitcher’s build at 6’5”, 215. He brings three pitches to the table, the best of which is his Uncle Charlie, which is an above-average offering.

53. Dellin Betances, SP, New York Yankees (NR): Betances is one of the keys to the Yankees’ new found pitching depth. A future staple of the Yankees’ staff, Betances is a couple of weeks shy of his 24th birthday after making his big league debut last season with one start and one relief appearance. He wasn’t exactly torched – one hit in 2 1/3 IP – but was too busy walking hitters to give them a chance to hit. Betances looked like a workhorse at Double-A, but his strand rate at Triple-A was low. This righty keeps moving up the Yankee prospect list, but there are some questions about whether he’ll stick as a starter in the bigs. Either way, this dude is an absolute beast at 6’8”, 260.

52. Jake Odorizzi, SP, Kansas City Royals (NR): Traded to the Royals from the Brewers in the Zack Greinke deal, Odorizzi gave KC yet another young talented arm in the pipeline. The soon-to-be-22-year-old righty has become of the team’s top pitching prospects after dominating at High-A and then proving he could win at Double-A as well, although he dealt with some home run issues at the higher level. A sandwich pick in 2008, Odorizzi won’t be an ace, but he should develop into a fine middle of the rotation man thanks to his heater. His changeup, however, remains a work in progress.

51. Jake Marisnick, OF, Toronto Blue Jays (NR): One of the top prospects to come out of a very strong high school draft class in the LA area, Marisnick feasted in the Midwest League last year to move near the top of the charts among Toronto prospects. In his first complete year of full-year ball, Marisnick massively improved his BA while flashing a nice combination of emerging power and great speed. He makes nice contact and could be at Double-A by season’s end if he puts up a season similar to what he did last year.

50. Yasmani Grandal, C, San Diego Padres (NR): Grandal’s path to the majors is a bit clearer now that he’s been traded away from the Reds, who are putting all their chips on Devin Mesoraco. Unfortunately, the move also limits his offensive upside by going from the hitter-friendly confines of The Great American Ballpark to having Petco as his future home. The Cuban born backstop is considered a better hitter than catcher at this point, and that can be a bit of worry as he nears a big league job. As one of the key components the Pads got for Mat Latos, there is pressure on Grandal to justify this deal. Last year, Grandal soared through four levels, never hitting less than .296 at any stop, before finally arriving at Triple-A for a brief late-season look. Assuming he does well in Triple-A this year, he’s now in line for a cup of coffee in September with a chance for a full-time job in 2013. His arrival in the San Diego organization, along with Yonder Alonso, really helped beef up the Padre system. He’s a strong kid and Grandal’s hitting prowess will play in the bigs; the big challenge will be in having his glove catch up with his bat.

By RotoRob
This entry was posted on Wednesday, March 14th, 2012 at 5:21 pm and is filed under 2012 RotoRob MLB Draft Kit, BASEBALL, Cheat sheets, Prospects, RotoRob. You can follow any responses to this entry through the RSS 2.0 feed. Both comments and pings are currently closed.