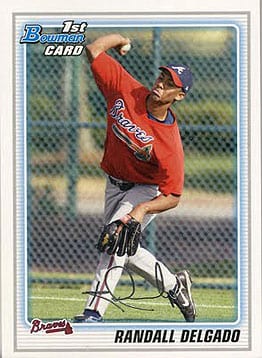 Randall Delgado was impressive in his first taste of the Show.

The 2012 RotoRob MLB Draft Kit surges onward today with Part IV of our Top 55 Prospects list. While you Dodger fans wonder how Frank McCourt is going to keep such a large stake in the team he ostensibly was selling, let’s review prospects 30 through 21.

30. Randall Delgado, SP, Atlanta Braves (NR): We liked Delgado enough to include him among our top 90 starting pitchers for 2012, and we believe his time to shine is coming very soon, adding to the embarrassment of riches that is the Braves’ pitching staff. He made his big league debut last year, looking absolutely superb in seven starts and 35 IP. Delgado actually improved his homer rate from Triple-A, and remains in competition for the fifth starter in Atlanta this season. He had a decent record in Double-A, but his strand rate at Triple-A was higher. Delgado has superb mound presence and features a low-90s fastball, a tremendous changeup, and a fine curveball. He could top out as a No. 2 starter in time.

29. Jarrod Parker, SP, Oakland A’s (15): Parker is another pitcher we ranked in the top starting pitchers, placing him 80th to be exact. The 23-year-old righty was actually higher on this list a year ago, but he wasn’t as dominant at Double-A last year – although he sure looked good in his MLB debut, tossing 5 2/3 shutout innings. Parker is a potential ace, acquired by the A’s from Arizona in the Trevor Cahill trade. Parker stayed healthy last year, which was huge after he missed all of 2010 following Tommy John surgery, and based on his FIP, he deserved slightly better bottom line results. The ninth overall pick in 2007, he features a hard sinkerball that has reached as hard as 97 mph. Parker’s a fast worker, and if he can work through Triple-A quickly, he’ll be on the fast track to Oakland by mid-season or sooner.

28. Bubba Starling, OF, Kansas City Royals (NR): This is one freakishly athletic dude. Starling has reportedly smacked 500-foot home runs, can throw a ball 95 mph and has blazing speed (4.3 seconds in the 40-yard dash). His tools are so off the charts that some think he has as much upside as anyone in the minor leagues; it’s just a matter of seeing if those tools can translate into everyday skills. And for this we must wait because the fifth overall pick from last year’s draft has yet to spend a day in minors. That’s probably the main reason he rates this low – simply because there’s still much to accomplish and lots can go wrong along the way. This 19-year-old is already a physically imposing presence, but to sum him up in a word, he’s raw.

27. Martin Perez, SP, Texas Rangers (16): We had Perez just outside the top 15 last year, after being in our top 10 the season before that. Well, he’s still a top prospect, but clearly has slipped in recent seasons. Farmed out by the Rangers about a week and a half ago after getting tagged in his only spring start, Perez pitched much better at Double-A last year, but he benefited from a higher-than-usual strand rate. His strikeout rate dipped in his first taste of Triple-A and there are many that have soured on Perez as a prospect, but that’s an erroneous reaction. Bear in mind that he was always young for his level, and won’t be 22 until next month, so there is still a ton of upside here. One of Texas’ first significant Latin American investment will likely make his major league debut at some point this year and he had a very good chance of landing a rotation spot in 2013.

26. Archie Bradley, SP, Arizona Diamondbacks (NR): Bradley was one of the top high school arms available in the 2011 draft and wound up going seventh overall to the D-Backs. The only other high school hurler who was better than him was fellow Oklahoman Dylan Bundy – the Sooner state sure had a bumper crop of arms last year. Bradley made a brief debut in Rookie ball last year after signing, and proved he can blow the ball by professional hitters in his one start and one relief appearance. The crazy thing is Bradley isn’t even the top Arizona pitching prospect – not by a long shot. This team is now stacked with young arms, even after trading away Jarrod Parker in the Trevor Cahill deal. Bradley, a 19-year-old righty, was given a $5 million signing bonus because Arizona thinks he can be a No. 1 starter. He won’t be rushed, though, because there’s really no point given the team’s pitching depth, so don’t expect to see Bradley in the bigs before, say, 2015 or so. However, he’ll be worth the wait thanks to his upper 90s heat and nasty curve. Bradley’s changeup remains a work in progress, another reason he’s best left to marinate over time.

25. Taijuan Walker, SP, Seattle Mariners (NR): The Mariners are a team on the rise, mostly thanks to a superb young pitching staff they’re building, a key component of which will be Walker. Sure, they have some decent young sticks (Dustin Ackley, Jesus Montero, Justin Smoak), but the Mariners’ fortunes will be dictated by what happens on the mound. Last year was Walker’s first in a full-season league and he had a good record and perhaps could have had an even lower ERA than what he put up (2.89) based on his fine FIP. This 19-year-old righty was one of those multi-sport athletes in high school, and that often results in slow development time when switching full-time to baseball. However, judging by his superb effort at Class-A last year, Walker will move faster than anticipated and he’ll have a good test at High-A this season. He can bring the heat at 95 mph, but is at his best when he dials it down to around 93. Walker will need to develop more consistency within his starts to go deeper into games, but he’s got plenty of time to work on that. He’s unlikely to see the bigs until around September 2013 at the earliest.

24. Miguel Sano, 3B, Minnesota Twins (36): When we ranked Sano 36th on this list a year ago, we talked about how’d probably outgrow shortstop. Sure enough, after a fairly even split between third and short in 2010, his time at the hot corner increased significantly last year. Sano will be moving to full-season ball this year after making a mockery of Rookie-level by smoking 20 homers in just 66 games. There is still some question of whether he’ll even be able to stick at third base (his ultimate home could be first base or left field), but his power is so off the charts that he’s a fascinating prospect. Depending on how quickly Sano adjusts to full-season ball, he could wind up on a faster track to Minny. As things stand, we don’t expect him to arrive until roster expansion in 2014 or even mid-season 2015.

23. Travis d’Arnaud, C, Toronto Blue Jays (NR): One of several highly-touted former Phils prospects, d’Arnaud came to Toronto in the Roy Halladay deal. The young catcher managed to cut his strikeout rate at Double-A last year, but was probably also a little fortuitous with his BA (.311) given a pretty much unsustainable .365 BABIP. After turning 23 last month, d’Arnaud had a huge breakout with the stick last year, putting him within shouting distance of Toronto. He’ll need to prove he can stay healthy, but if he does, by next season he could be pushing J.P. Arencibia into a timeshare. Among d’Arnaud’s strong points are his arm, his power and his athleticism, but he’ll need to improve his accuracy if he’s going to take full advantage of his rifle arm behind the plate. He’s got a chance to be an 800 OPS catcher – which is pretty darned good (just six catchers managed that feat last season).

22. Nolan Arenado, 3B, Colorado Rockies: Colorado’s top prospect should have an easier road to the Show now that the Rox released one of their perplexing – and aging – additions from this winter, Casey Blake. Arenado drove in more runs than any minor leaguer last year and he continued to flash elite power at the AFL. His power was actually down at High-A last year compared to what he flashed the season before at Class-A, but Arenado remains a key component of the next wave of third base prospects who will try to inject some life back into what has been a flagging position, at least from a depth perspective. He’s really improved his conditioning the past couple of years and is now in much better shape, having trimmed 20 pounds of excess weight. A tremendous contact hitter, Arenado may not ever be a major home run hitter, but his line-drive stroke will certainly produce its share of ribbies. A very advanced hitter for his age, he may never be a superstar, and there are some questions about his defence, but this kid can rake and he should be pushing for a big league job by this time next year.

21. Carlos Martinez, SP, St. Louis Cardinals (NR): This young Dominican righty put himself on the prospect map in his first season in North American last year, racking up dominant strikeout rates at Class-A before suffering from some wildness at High-A. Some suggest Martinez’s raw stuff is better than top Cardinal prospect Shelby Miller, but obviously he’s much further from the majors, so the typical pitcher perils still await Martinez. He generally brings his heater in the 95 to 98 mph range, but he lacks movement on the pitch. Martinez’s change-up is solid, but he’ll need to get better control of it. His curveball also has great potential, so if Martinez can sharpen his command at the next level, he’s going to move quickly.

By RotoRob
This entry was posted on Thursday, March 29th, 2012 at 9:58 pm and is filed under 2012 RotoRob MLB Draft Kit, BASEBALL, Cheat sheets, Prospects, RotoRob. You can follow any responses to this entry through the RSS 2.0 feed. Responses are currently closed, but you can trackback from your own site.