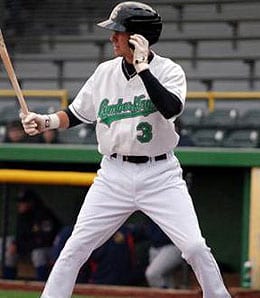 Nick Franklin’s bat will play in the majors whether at shortstop or elsewhere.

The 2012 RotoRob MLB Draft Kit continues today with another batch of our Top 55 Prospects list.

So while you Chase Utley owners wonder how long you’ll be without your second baseman, let’s take a closer look at prospects 40 through 31.

40. Nick Franklin, 2B/SS, Seattle Mariners (44): When we ranked Franklin 44th a year ago, we said he was likely the shortstop of the future in Seattle – unless he couldn’t handle the position. Well, he continued to play the majority of his games at short, but still saw plenty of action at second last year, just in case. A lot of experts are not listing him this high, and if he can’t stick at short, you definitely have to bump him up a few slots. Still, Franklin’s ability to play multiple positions will guarantee him of playing time once he reaches the majors. He struggled with the bat this spring and was recently farmed out, but this kid will hit big league pitching in time. Franklin missed time with injuries last year, but he flashed decent pop at High-A before heading to Double-A, where his batting eye regressed (although his bottom line numbers were excellent). One of the top prospects in a Mariner system that’s now brimming with impact talent, Franklin just turned 21, and while the power he flashed in 2010 evaporated, we’re willing to cut him some slack because of his health. A solid AFL showing suggests he’s back on track, and if Franklin can regain his power stroke at Double-A this year, he’ll be knocking on the door of Em City real soon.

39. Gary Brown, OF, San Francisco Giants (NR): Brown scored – are you ready for this? – 115 runs in 131 games at High-A last year. Yikes! But he’s not just a table setter – he’s also capable of driving in runs. In fairness, the Cal League is a hitter’s haven, but this 23-year-old has ascended to the top of the Giants’ prospect list because his wheels are off the charts good. Being at the top is a good place for Brown, who will likely be the leadoff man in San Francisco in the not-too-distant future. He really improved his contact rates last year, which was the missing piece of the puzzle for him to become a top-of-the-order threat. All that’s left for Brown is seasoning at higher levels. Let’s see how he fares at Double-A before establishing a timeline for his arrival at AT&T Park.

38. Brett Jackson, OF, Chicago Cubs (43): With this list mostly being targeted at keeper leagues, there are many names here that you won’t necessarily need to know in 2012. Jackson isn’t one of those; in fact, we think he’ll make enough of an impact this year at some point to have included him on our Top 10 Rookies list. This centre fielder is drawing rave reviews this spring, and with only Marlon Byrd standing in way, it’s just a matter of time before Jackson assumes his role at Wrigley. The Cubs’ first rounder in 2009, Jackson has all the tools necessary for success – all he needs now is an opportunity. He flashed a nice power-speed combo at Double-A last year, and then hit with even more pop after a promotion to Triple-A. Talk that the Cubs would go after Yoenis Cespedes never came to fruition, keeping the path clear for Jackson, who may not be a superstar, but should top out as a very solid top-of-the-order hitter in Chicago.

37. Xander Bogaerts, SS, Boston Red Sox (NR): A 19-year-old from Aruba, Bogaerts is quite a way down the Red Sox system, but his upside is through the roof. Considering Boston has really struggled for a long-term solution at shortstop since Nomar Garciaparra, it now has at least three prospects that could take the gig and run with it at one point or another. Bogaerts enjoyed a very productive campaign at Class-A, but he’ll need to make better contact if he’s going to fulfil his promise. Tall and lean, Bogaerts can use all parts of the field and projects to have above average power for a shortstop, but the fear is when his frame adds bulk, he may be too big to play the position.

36. Mike Montgomery, SP, Kansas City Royals (20): Montgomery is one prospect we’re expecting to hear from this season, so he’s also on our Top 10 Rookies list. He was in the mix for a rotation spot this spring, but has recently been reassigned, which is a smart move by KC. Montgomery could definitely use a bit more Triple-A time, but we do think he’ll be a factor in KC for at least half the season. Last year at Triple-A, he did match his Double-A win total, but it took 14 more starts to get there. It was nice to see Montgomery stay healthy, but he’ll need to rein in those long balls before moving up to the bigs. The 22-year-old is KC’s top pitching prospect but his ascent to the bigs has been sluggish thanks to injuries and ineffectiveness. As mentioned, he put the health worries behind him last year. Here’s betting the second part of the equation is addressed this season. As a southpaw, Montgomery will be given every opportunity to succeed, so don’t be put off by his weak results last year.

35. Gary Sanchez, C, New York Yankees (NR): Sanchez has now established himself as arguably the top position player prospect in the Yankee system. He was recently farmed out to the minor league camp, but not before he put up some strong numbers in limited action this spring. Sanchez’s walk rate at Class-A last year was impressive and he also flashed some very nice power. The 19-year-old backstop has been compared to the dude who was blocking him until very recently – Jesus Montero. Another comparison we’ve seen is Ramon Hernandez, and if Sanchez can put together a career like that, that wouldn’t be anything to shake a stick at.

34. Arodys Vizcaino, SP, Atlanta Braves (NR): Vizcaino’s spring took a sharp turn downward when it was announced he would need Tommy John surgery, knocking him out until 2013. Obviously this burns his chances of helping you this year, but we still love him as a keeper prospect. Last year, Vizcaino began the season at High-A, but was in Atlanta by August. He was eating up big innings at High-A with a sweet ERA when he got the call to Double-A, where he pitched as well, but the results didn’t show it. Vizcaino new made a few relief appearances at Triple-A, showing excellent control and he held his own pitching out of the pen in Atlanta. One of the Braves’ top prospects, Vizcaino had a very good chance to spend quite a bit of time in Atlanta this season, so this is a tough setback. His fastball/curveball arsenal is well suited for late relief, so don’t be shocked if his days as a starter are over once he returns from surgery next season.

33. Hak-Ju Lee, SS, Tampa Bay Rays (NR): Lee was traded from the Cubs to the Rays in the Matt Garza deal, a trade we discussed in a Podcast last year. Lee hit well this spring, but was recently farmed out by Tampa Bay as he’s only played 24 games above Class-A. Last year, Lee flashed developing pop at High-A and continued to show great base stealing prowess after a promotion to Double-A. Now the Rays’ top position prospect, the 21-year-old shortstop is highly underrated by most, but he hasn’t escaped our watchful eye. Lee became expendable for the Cubs with the emergence of Starlin Castro, but he’ll have a much clearer path to the bigs in Tampa Bay.

32. Matt Harvey, SP, New York Mets (NR): The Mets think enough of Harvey that they refused to include him in their failed attempts to land Gio Gonzalez. The clubs’ first rounder from 2010 made his pro debut last year, dominating at High-A despite a high BABIP, and then continuing to rack up wins after a promotion to Double-A. Several experts aren’t nearly as high on Harvey as we are, but we can’t help but be impressed with how far he’s come so quickly. He’s not going to be an ace, but Harvey should be a splendid No. 2 starter in the Show – very soon. The former Tar Heel can get his heater up to 97 mph with respectable movement.

31. Zack Wheeler, SP, New York Mets (NR): Acquired from San Francisco in the Carlos Beltran trade, Wheeler recently hurt his ankle climbing some stairs. No word whether he was carrying deer meat at the time. The Mets are putting together a nice collection of young arms, so their long-suffering fans finally have some reason for optimism. Wheeler’s heater is generally in the low- to mid-90s, but he has reportedly dialled it up to 99 before and it helped him put up some serious K totals at High-A last year. He was enjoying a winning record for the Giants’ High-A squad and after getting dealt to the Mets, he didn’t yield a single homer in six starts for their High-A team. Wheeler is now the Mets’ top prospect, and it is only the Giants’ embarrassment of mound riches that will cause them not to completely rue this deal considering the rental Beltran failed to help them get back to the playoffs. Wheeler was one of the top pitchers in the hitter friendly Cal League last year, and while he is far from a finished product, he’s definitely ready for Double-A. Expect to see him at Citi Field by September 2013 at the earliest.

By RotoRob
This entry was posted on Monday, March 26th, 2012 at 11:56 am and is filed under 2012 RotoRob MLB Draft Kit, BASEBALL, Cheat sheets, Prospects, RotoRob. You can follow any responses to this entry through the RSS 2.0 feed. Responses are currently closed, but you can trackback from your own site.