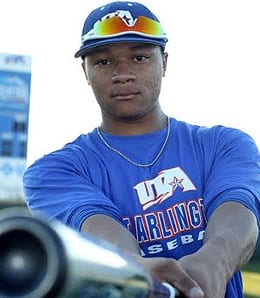 The 2012 RotoRob MLB Draft Kit surges forward today as we continue to count down the top 55 prospects.

So while you wonder how long Hanley Ramirez will play nice with his move to the hot corner, let’s examine prospects 49 through 41.

49. Michael Choice, OF, Oakland Athletics (NR): Choice spanked 30 homers in just 118 games at High-A (plus another six in 17 games at Rookie ball) to soar up the A’s prospect chart heading into 2012. As a reward, Oakland brought him to camp briefly this spring as a non-roster invitee and he didn’t look out of place, going 2-for-7 with a couple ribbies. Choice will need to trim his strikeout rate if he’s going to hit for a decent average in the bigs, but that power – especially at such a young age – has to have the A’s brass salivating. At 21, his 36 homers ranked fourth in the minors last season, yet he was the youngster player among the top 10 in that department. Choice’s swing mechanics could use some refinement, but he’s far enough away from the majors that this issue has time to be addressed. Given his major power potential, he’ll get plenty of rope.

48. Yonder Alonso, 1B, San Diego Padres (32): Coming over from Cincinnati to San Diego along with Yasmani Grandal, Alonso is free from the shadow of Joey Votto and has a much clearer path to the majors. That’s the good news. The bad news is he goes from a hitter’s paradise to a nightmare, so that caps his upside to an extent. The Cuban born Alonso flashed some serious power during his slightly longer look with the Reds last year, and he has the makings of a productive line-drive hitting machine. He draws walks, but has very little speed. The .330 mark he had with the Reds last year isn’t a baseline for him, but Alonso should hit in the .280s or so with some decent pop. He’ll be 25 next month, so his upside isn’t through the roof, and he’s struggled against lefties throughout his career, so he’ll need to show improvement in that area if he’s ever going to be a real star.

47. Francisco Lindor, SS, Cleveland Indians (NR): Some thought Lindor would go in the top five picks of last year’s draft, but he slid to eight and Cleveland pounced on the Florida high school shortstop. He doesn’t have major power but he could be an ideal two-hole hitter with All-Star potential… perhaps even become the next Omar Vizquel. After signing late last year, Lindor only got into five games at Low-A, so there’s little to report from a statistical perspective, but his upside has pretty much already vaulted him to the top of the Indian prospect list. Just 19, he was likely the best shortstop available in last year’s draft (although, in fairness, it wasn’t a deep class) and is gifted with a rifle arm. Lindor did win the 2010 Aflac All-American Home Run Derby, but again, we don’t project him to be a home run hitting infielder in the majors.

46. Oscar Taveras, OF, St. Louis Cardinals (NR): Taveras has been an RBI machine since being signed out of the Dominican Republic by the Cards, driving in 107 runs in 138 games in his minor league career. Last year, he was productive in rookie ball and managed to reduce his strikeout rate after getting moved up to A-Ball – a great sign. The 19-year-old outfielder was somewhat on the radar after 2010, but his 2011 effort propelled him way up the Cards’ prospect ranks. This kid is an exciting young hitter, batting a whopping .386 in the Midwest League and he could top out at 25 to 30 homers once he matures into his frame.

45. Jon Singleton, OF/1B, Houston Astros (NR): A key component of the package Houston received from Philly in the Hunter Pence deal, Singleton needs to become a big-time player to justify this move for the Astros. He was recently reassigned to minor league camp, but made a nice impression first, batting .444 in limited action. Singleton’s strikeout rate was up at High-A last year, and it got even worse after the trade, but he did put up some nice counting stats after joining the Houston organization. Perhaps the top prospect in the Astro system now, the 20-year-old Singleton is projected as a power hitter capable of hitting for a high average – just the type of player Houston can start building a winner around. Is he an elite talent? The jury is out on that one, but I’ve heard him compared to David Ortiz (except he’s not as huge, physically, which is a good thing).

44. Christian Yelich, OF, Miami Marlins (NR): The Marlins’ top pick in 2010, Yelich was plucked out of a California high school and he has quickly established himself as the team’s top prospect. He’s gifted with one of those sweet lefty swings and flashed developing power in his first year at full-season ball in 2011. The 20-year-old uses all parts of the field and he showed major improvement in his walk rate. Yelich has great base stealing ability and once he grows into his 6’4” frame and adds strength, he’ll be a serious power-speed threat.

43. James Paxton, SP, Seattle Mariners (NR): The Mariners are beginning to put together a real nice collection of young arms, and Paxton is one of the best. He surrendered just one hit in two innings this spring before being sent down to minor league camp. Last season, his first as a pro, Paxton pitched very well at Class-A and then looked even more impressive at Double-A, improving his control and bottom line results. The 23-year-old Canadian has put himself on the fast track to Seattle, so don’t be shocked to see him later this season, although a full year in the minors would stead him well. A tall lefty, Paxton’s fine record at the University of Kentucky prompted the Mariners to take him in the fourth round in 2010.

42. Anthony Rizzo, 1B, Chicago Cubs (NR): Rizzo will defer to Bryan LaHair to begin the season, but he’s such an integral part of the Cubs’ future, that he won’t be denied for long, especially considering the monster spring he’s having. Rizzo made a mockery of Triple-A, but he clearly wasn’t ready when the Padres brought him up last season. He only flashed glimpses of the extra-base power he has, as this guy is capable of taking the ball out of the yard to all parts of the field. We’re a little worried about his strikeout rate, but that .320 isolated power he flashed at Triple-A has to have owners salivating. While he’s a fantastic keeper option (especially after getting dealt away from Petco), we all think Rizzo will be a factor this season. He was the key component the Padres got for Adrian Gonzalez and now they’ll have to watch him tear the cover off the ball for the Cubs. Rizzo, who does not get cheated on his swings, could very well be the next A-Gon, or at least a Lite version of him.

41. Anthony Gose, OF, Toronto Blue Jays (NR): Gose has already been dealt twice and has yet to play a day in the majors, but it’s clear he’s found a home in Toronto and judging by his play this spring, he’s nearly ready to stick. This dude swiped 69 bags at Double-A last year, and will be a key component for a Jays’ team that is poised to finally take a big step forward in the AL East. Gose isn’t just a basestealer, though; he’s got some pop, too. He’s brimming with tools, but some experts aren’t as high on Gose as we are. If Travis Snider doesn’t come around, Gose will be stealing something other than bases – he’ll be stealing a job in Toronto. A two-way player when drafted, it’s becoming clear that making him a hitter was a wise decision.

By RotoRob
This entry was posted on Monday, March 19th, 2012 at 9:21 am and is filed under 2012 RotoRob MLB Draft Kit, BASEBALL, Prospects, RotoRob. You can follow any responses to this entry through the RSS 2.0 feed. Both comments and pings are currently closed.