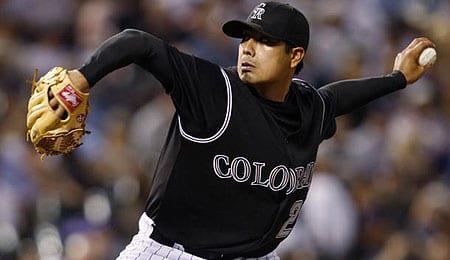 Jorge De La Rosa should be back by June, but how effective will he be?

A season after losing No. 1 starter Ubaldo Jimenez to trade and No. 2 starter Jorge De La Rosa to injury, the Colorado Rockies are trying to address their rotation issues this winter.

Last season was a mess as 13 different pitchers made starts for Colorado, compiled a composite ERA that was better only than the Cubs among NL teams.

While free agents C.J. Wilson and Mark Buehrle are out of the team’s price range, Roy Oswalt was reportedly one of the Rockies’ targets, but apparently they never got anywhere in the talks as Oswalt is waiting for the bigger fish on the market to find new homes before he gets more serious with particular clubs.

Hiroki Kuroda has emerged as the team’s top free agent target, but Colorado will have plenty of competition in trying to land the 37-year-old righty. He’s exactly the kind of innings eater the Rockies need in a rotation that currently projects to include youngsters Drew Pomeranz, Alex White and 21-year-old righty Tyler Chatwood, acquired last week from the Halos for Chris Iannetta.

The team is also considering bringing back free agent Kevin Millwood, who seemed to revitalize his career in Colorado in the second half.

Another familiar arm that could make his way back to the mountains is free agent Jeff Francis. Once the top pitcher on the Rockies, Francis looked a bit better with the Royals last season and is apparently not repulsed by the idea of returning to Coors Field.

The rotation is currently slated to be headed by Jhoulys Chacin, who had more problems with the long ball last year, but has tremendous potential as could develop into an ace in time. Also returning is veteran Jason Hammel, who throws almost 93 mph but was so bad at times that he had to removed from the rotation for a couple of weeks down the stretch. The team would love to get his deal off the books, but he’s owed big money next year, so is sure to be in the mix.

Veteran Aaron Cook is another of the team’s free agents that could be brought back. But given how awful he was this year – reaching double digits in losses in just 17 starts – I can’t see that happening.

Another possibility is Oriole veteran Jeremy Guthrie, linked in trade talks for closer Huston Street. This isn’t the best move for the Rox from a financial standpoint, but they do need a veteran starter.

Also in the mix for a rotation slot is youngster Esmil Rogers. He was hit hard with the Rockies this season and wasn’t much better at Triple-A. Unless Rogers takes a big step forward in the spring, he’s a longshot.

Now, let’s not forget two of the wild cards here – De La Rosa and Juan Nicasio. The latter has somehow already recovered from a broken neck suffered in August and will be ready to compete for a rotation spot in the spring, while JDLR continues to progress from Tommy John surgery and is expected to be back in May or early June – certainly in the first half of the season at any rate.

Bear in mind that De La Rosa, even if he does come back earlier than expected, will need time to get back to where he was before he was hurt. Fantasy owners shouldn’t really count on him contributing much in 2012.

There’s always Clayton Mortensen, who was perfectly middling during his stint with the club last year.

Organizationally, the Rockies have done well developing international pitchers, but continue to strike out with domestic arms (hence their recent habit of acquiring such arms via trade – in both the Jimenez and Iannetta deals, for instance).

For four straight seasons, Colorado used it first round pick on a U.S.-born hurler and we’re still waiting to see some positive returns from this run that included Greg Reynolds in 2006 (who made it back to Colorado last year after three year wait, but is still getting shelled too hard to stick), Casey Weathers in 2007 (a reliever that finally made it to Double-A this year but has battled injuries throughout his career), Christian Friedrich in 2008 (who was slightly better at Double-A this year, but was way too prone to the long ball), and Tyler Matzek in 2009, who was so bad at High-A that he had to be sent back down to Class-A and then sent back to his high school coach to get his mechanics back. Matzek was better upon his return, but is a long way from being ready to contribute at the big league level.

By RotoRob
This entry was posted on Monday, December 5th, 2011 at 1:46 pm and is filed under BASEBALL, RotoRob. You can follow any responses to this entry through the RSS 2.0 feed. You can leave a response, or trackback from your own site.