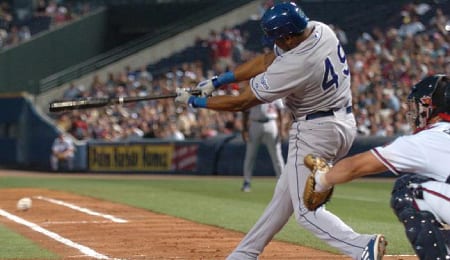 Willy Aybar has been thrown right into the fire in Atlanta. (UPI)

Welcome to Atlanta, Willy Aybar. Now, if you wouldn’t mind taking over for a future Hall of Famer for a couple of weeks while you get your feet wet with a new club, that would great.

This is the task assigned to the 23-year-old Aybar, acquired less than a week ago from the Los Angeles Dodgers in a deal that sent Wilson Betemit out west. Of course, the very day the deal went down, so did third baseman Chipper Jones, aggravating his oblique injury and forcing the Braves to put their backup in.

Unfortunately, Betemit was that backup.

All Aybar’s done is bat .385 with a .467 OBP and play steady defense in his first three games with Atlanta, before taking an 0-for-4 on Thursday as the Braves tried in vain to complete a three-game sweep in Pittsburgh.

Atlanta has a tendency to trust young players and it proved it again by inserting Aybar at the top of the order. Marcus Giles, who’s openly discussed his disdain for batting leadoff, has been shifted back to his more customary second spot in the order, and that could be the tonic for him turning his subpar season around.

Since joining the Braves, the switch-hitting Aybar has fared much better from the right side to date, batting 5-for-9 while going hitless as a lefty, but that’s an abberation. He tends to show almost no platoon split, exactly what you love to see from a switch hitter.

Aybar is a very difficult hitter to strike out and has a tremendous batting eye, with 1.31 walks to every strikeout in his career to date. He won’t chase pitches, rare for such a young hitter, and he tends to be a good situational hitter (.324 with runners in scoring position after batting .471 last year; .333 when there’s two outs in that situation).

The Braves are impressed with the young Aybar in the early going, but it’s doubtful his long-term future will be as a leadoff hitter. The organization sees him batting lower in the order down the road.

In Fantasy leagues, Aybar is being scooped up real quickly in NL-only leagues, so grab him fast. He’s even started to get plucked in very, very deep mixed leagues.