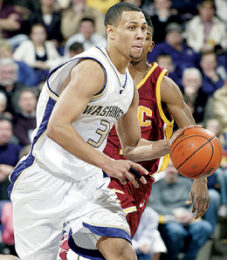 This past season, everything came together for Roy and he really landed on the prospect map. The 6’6″, 210-pound guard set career highs across the board with almost 32 MPG, over 20 PPG, 5.6 RPG, 4.1 APG, 1.8 A/T ratio, 1.4 SPG, almost a block per game, 81 per cent free throw shooting and over 40 per cent three-point shooting (39 successful treys). At the end of December, Roy went berserk with back-to-back 35-point games and that definitely opened some eyes. His ability to step up in key situations during big games definitely helps compensate for whatever tools he lacks.

He’s expected to be a shooting guard as a pro, although he could see some action at point guard and possible small forward as well. If he exceeds expectations, Roy could wind up being as good as Manu Ginobili, but a more likely scenario is Marquis Daniels, another player who can take it to the hoop, but is limited by his shooting range. Another comparison we’ve seen for Roy is as a more talented version of Doug Christie.