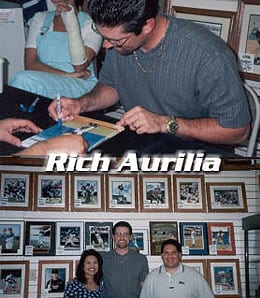 If Rich Aurilia still gets solicited for his autograph, it won’t be happening in San Francisco.

Rich Aurilia had a bit of a renaissance in 2008, but we weren’t bullish on his prospects for 2009. In fact, we didn’t expect him to have nearly as large a role on a team committed to youth, and we were bang on there as Aurilia only appeared in 60 games this year.

Talk about crappy timing for free agency, Aurilia is coming off the worst season of his 15-year career. The dude managed just four extra-base hits in 133 plate appearances. Uh, ya. To make matters worse, his walk rate dipped.

Clearly, Aurilia is done with the Giants and many believe the 38-year-old should just call it a day. In fact, he was reportedly pondering retirement, but now has other plans. Aurilia says he’s okay accepting a bench role in order to continue his career. No kidding? Um, I doubt you have any other option at this point, Rich.

I mean, jeez…what value does Aurilia offer at this juncture of his career? He’s limited to corner infield play and is coming off a season in which he hit .186 against righties. And it’s not as if he killed lefties (.250 BA).

Now that he’s leaving AT&T Park, I’m even more fearful for Aurilia’s numbers. The old guy hit .190 with a 425 OPS on the road. This is a freaking former Silver Slugger we’re talking about.

Clearly, the Giants were done with him after June, giving him only 27 at bats from that point of the season on. They contemplated releasing him outright, but instead put him on the DL twice for “ailments” (read: because they wanted to get someone else on the roster).

As we’ve discussed earlier, the Giants were hugely inept offensively in 2009, which makes the fact that Aurilia still couldn’t carve out PT with them all the more sad.

Maybe someone will let Aurilia extend his career, but for Fantasy purposes, he has shed this mortal coil.