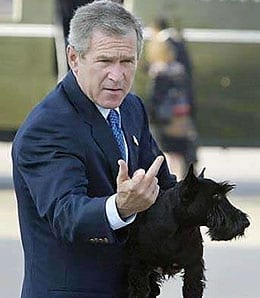 Fuck you, and your little dog, too.

“We stayed in Toronto for a week and played three games. I don’t know if you ever stayed in Toronto, but it’s not exactly Las Vegas. To say that we were plucking our eyebrows out one at a time would be an understatement.”

And fuck you too, Chipper. Here is hoping for some reason he has to come back. Please let him come back. Funny how other athletes come here and don’t seem to complain. Not enough hot spots for ya, Chipper, like there are in Atlanta? Downtown Atlanta is a real thriller. Perhaps he prefers the risk of getting shot in Buckhead as opposed to the Toronto club district. Here’s hoping Bobby Cox gets to him and talks some sense into him before he opens his trap again. Somewhere I bet J.P. is laughing or cheering Jones on.

Meanwhile, get a load of the video of the Grabovsky/Blake affair. What the hell is Jamal Mayers doing? Who does this clown think he is? He shows more toughness in this clip then he has in every Maple Leaf game this season. Please let the Mayers trial end soon. Brian, waive him today if at all possible.

Edison Volquez, right, earned himself a lot of fans in 2008, but his chances for a repeat seem slim at best. The 2009 RotoRob MLB Draft Kit continues as we release more of the Top 10 Lists Fantasy Owners Always Wanted But Were Afraid to Ask For. Today, Alex has his choices for 2009 flops. […]