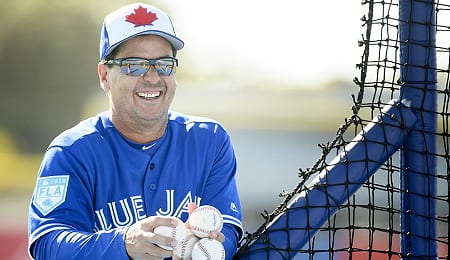 Tampa Bay signed this Cuban veteran in 2015, and after two seasons in its system he seems ready to take on the majors. Varona showed a decent power-speed combo at Triple-A last year, but this season he’s hitting for average early on. He tripled twice on Opening Day and then added another three-bagger plus a single on Saturday. Varona is not on the 40-man roster, but he’s put himself in a position to get a call should injury strike the Rays, so keep an eye on his progress this year. Just note that at age 29, he’s clearly not a prospect, so this is simply a redraft league option should he get a crack.

At this stage of the season, if you’re a keeper league owner that’s out it, you’re scouring the minors for possible options. Drafted by the Phillies in the ninth round out of college last year, Laird hit well in his pro debut in 2015, but injuries limited his action this season. However, he tore through Low-A and continues to rake at High-A, piling up plenty of runs at both stops. Laird is not young, so will need to move fast, but is worth tracking.