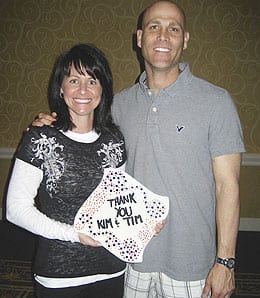 Kim Hudson (left) has forgiven the man that ruined her husband Tim’s season.

After skipping last week because of stupid “real life” issues related to work, we were back for another episode of RotoRob’s Fantasy Baseball Weekly Podcast (heard every Thursday at 9 p.m. EST on Blogtalkradio), only this with a twist. Tim McLeod was dealing with his own “real life” work issues, so RotoRob Hockey Editor Chris Wassel graced us with his presence. And guess what? Chris knows baseball! Who knew? He ain’t no one horse pony, that’s for sure.

The highlights of this week’s show:

Miss it live and want to hear a replay of the show? No sweat. Just hit that pointy thing below and enjoy…