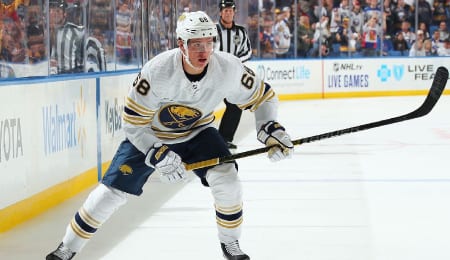 Since the NHL went on pause in mid-March because of something or other (we forget the reason now), we’ve been wondering whether the regular season was done or not. In the last week or so, it’s become clear that when and if the league resumes this season, we’ll be heading directly into a 24-team playoff tourney. As a result, the regular season is, apparently, done.

So that means we can finally reveal our picks for the top waiver wire picks of the 2019-20 Fantasy hockey season. Yay!!!

Oh sure, we had plenty of misses among our picks, and because of the (mostly) bi-weekly nature of our column, it means that some hot free agents get scooped up days before we can tout them. But the fact is that if you managed to wind up with, say, two or three of these guys on your team, chances are you were a pretty happy camper this season.

Victor Olofsson, LW, Buffalo Sabres (Week One): Olofsson was one of our first picks of the season, and wound up being the steal of the campaign, which is exactly what we predicted. Yup, every now and then, we really nail it. He’ll be headed into his prime soon, and in addition to putting himself on the map for a vital role with Team Sweden in the 2022 Olympics, he broke out in his first full season to the tune of 20 goals (including a whopping 11 on the power play; in fact, his first seven goals all came on the power play to set a new NHL record — see video below) in 54 games. That left Olofsson tied for second in goals among rookies and a prime Calder Trophy candidate.

Tyler Toffoli, RW, Los Angeles Kings/Vancouver Canucks (Week Five): When we recommended Toffoli, it was under the assumption he’d get traded to a team that would value him after he had worn out his welcome in LA. Well, he was better in November and then caught fire in December (15-5-6-11) to help up his value. By February, Toffoli was averaging a point per game, and when he was finally dealt to the Canucks, he rewarded them with 10 points in 10 games before the pause. In seeing more ice than ever after the deal, he provided Vancouver with more size, a winning background and some sweet scoring prowess.

Pavel Francouz, G, Colorado Avalanche (Week 11): One of our better mid-season picks, Francouz enjoyed a stellar rookie season and really announced himself as the future No. 1 goalie for the Avalanche. The former KHL standout only projected as a solid backup in the NHL, but his performance this season has forced us to reevaluate his ceiling.

Jean-Gabriel Pageau, C, Ottawa Senators/New York Islanders (Week Seven): Another player dealt at the deadline, Pageau didn’t wind up paying dividends before the pause, managing just a couple of points in seven tilts with the Isles. Before that, he had been having a breakout season in Ottawa, firing a career-high 24 goals in just 60 games (while going +10 for a really bad team). Pageau will obviously be on the Islanders’ playoff roster, so let’s see if he can justify the trade in the postseason. Even though he didn’t play the full season with the Sens, he wound up their third leading scorer, which again speaks to the team’s suckitude, but is also a nice feather in his cap.

Zach Hyman, LW, Toronto Maple Leafs (Week 13): Hyman also enjoyed a breakout, matching his career high in goals in 20 fewer games as he established himself as a top six forward in Toronto. The University of Michigan product has done well for himself as a fifth round pick.

Mikko Koskinen, G, Edmonton Oilers (Week Three): Koskinen proved his successful return to the NHL last season wasn’t a fluke as he improved on his numbers as part of a solid tandem in net in Edmonton. Likely a top 20 goalie this season, he periodically wowed us with his thievery.

Duncan Keith, D, Chicago Blackhawks (Week 13): As pretty much the last man left standing in a patchwork blueliner corps, Keith logged more ice time this season, and saw more power play time, which provided a boost to his numbers. The Hawks sure hit a home run in 2002 by nabbing this potential Hall of Famer with the 54th pick in the draft.

Lars Eller, C, Washington Capitals (Week Five): We identified that this veteran was having a career season pretty early on, and he wound up setting personal bests in assists and points, and certainly would have in goals, too, had he played more than 69 games. Washington’s third line centre posted a career-best 55.77 CF percentage as all his advanced metrics soared as well.

Adam Henrique, C, Anaheim Ducks (Week Three): As an early-season find, Henrique provided great benefit to owners as his third season with the Ducks was by far his best. With 26 goals, he was one of the very few players in Anaheim that was capable of finding the back of the net consistently, and with 10 points in the final 10 games before the pause, he was really hitting his stride down the stretch.

Alexandar Georgiev, G, New York Rangers (Week One): We recommended Georgiev right at the beginning of the season, and while that worked from a games played perspective, his overall numbers weren’t quite as good as the season before. The fact that he’s stuck in a three-goalie situation is also a problem, as it’s difficult to predict his role going forward, but he did prove to be an astute early-season pickup.

Brazilian composer Antonio Carlos Jobim, who died in 1994, was a juggernaut in the Brazilian music scene, helping make bossa nova a worldwide phenomenon. In 1967, he released his fifth album, Wave. Here’s the title track, a true Brazilian jazz standard.

Now it’s your turn. Let us know in the comments below which Fantasy hockey waiver wire picks were your favourites of the 2019-20 season.

Vegas gave some of its younger players a chance to shine this season, and none of them excelled like Tuch did. Although he cooled a bit in the second half, from November through the end of January he was fantastic, scoring 14 goals with 23 assists for 37 points over a 35-game span. If you took our advice in Week Four and rode Tuch over that stretch, kudos to you. For the season, he reached 20 goals for the first time, becoming a key man on the Knights’ third line. Man, the Wild must be kicking itself for losing such a big, talented kid like this.

Starting back-to-back games this week, Nilsson showed a bend but don’t break mentality, giving up plenty of juicy rebounds, but only two goals allowed on 67 shots faced over the pair of contests. Recently traded from Vancouver, he now has a chance to play more often and is taking advantage so far, with a 2.25 GAA since joining the Sens. And for what it’s worth, both Nilsson’s Corsi For and Fenwick For percentages have risen since heading east.

He probably wasn’t thrilled about how the season ended, but Brown sure reached into Fountain of Youth and came up with a fantastic campaign. After looking like a Fantasy non-factor for the last four seasons, he put together a 61-point effort for a new career best. Brown remains a tough as nails competitor, too, one whom you don’t want to keep your head down when you’re playing against.