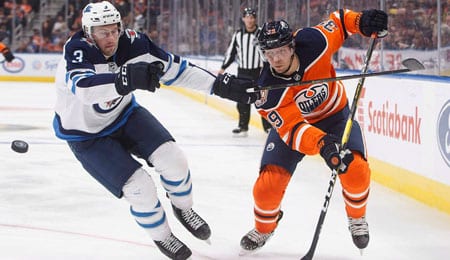 This season, Scrivens has played nine games in the AHL, going 2-6-1 with the Bakersfield Condors. In the past four seasons, he’s played with the Oilers, Los Angeles Kings and Toronto Maple Leafs, compiling a .905 career save percentage. Kassian has not played any games this season after he was entered into stage two of the league’s substance abuse and behavioral health program. Before this season, he was traded from the Vancouver Canucks, for whom he posted 59 points in 171 games over four seasons.

With a 9-1 record in their past 10 games, the Rangers are currently the hottest team in the league, leading the Metropolitan Division with five points to spare at 32. Girardi, more of a stay-at-home defenseman, is making a serious case for himself to be on your Fantasy roster. Through 20 games played, he has two goals, eight points, a plus-12 rating, six penalty minutes, 17 shots on goal, 46 hits and 44 blocked shots. We hope you have better players on your team’s top defensive pairing, but Girardi will certainly do as a third or fourth defenseman.