The Wire Troll: Rudy Gobert Getting a Chance 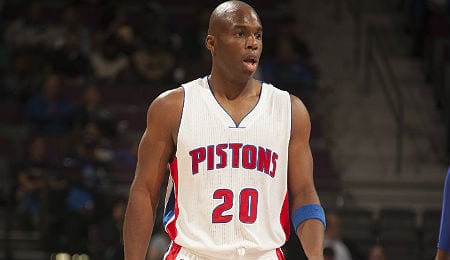 Jodie Meeks may soon be starting in Motown. (Probasketballtalk.nbcsports.com)

Welcome back to another week of our Fantasy basketball waiver wire recommendations. Stephen Curry keeps lighting it up while the Warriors’ amazing run continues; Dwight Howard (knee) returned to the court and put up a double-double; and Iman Shumpert dislocated his shoulder and will miss at least three weeks, meaning Tim Hardaway Jr. is going to get a chance to strut his stuff.

Jodie Meeks, SG, Detroit Pistons, (ESPN: 5.7 per cent; CBS: 13 per cent): Meeks, who we slotted 32nd in our Shooting Guard Rankings, just returned from injury on Friday and made an immediate impact with his energy (see video below). He’s an interesting prospect moving forward, as we believe he will take over the starting job in Detroit soon. If you are feeling confident right now, Meeks is worth a long term pick up moving forward.

Cory Joseph, PG, San Antonio Spurs (ESPN: 2.3 per cent; CBS: 8 per cent): Joseph, who has started three games in the last week, is a must own for Tony Parker owners. Joseph has averaged almost 13 points over his past four games, recording five or more assists three times in that stretch. Parker is old and banged up a little and when he misses a game here or there, Joseph is definitely worth a roster spot.

Tony Allen, SG/SF, Memphis Grizzlies (ESPN: 6.7 per cent; CBS: 22 per cent): If you are struggling in steals, Allen is a nice pick up. His steals over the last seven games: two, two, two, two, two, four, three. Allen has had a steal in 80 per cent of his games this season. He is also shooting the ball well and his scoring hasn’t been bad, however, with Allen, it’s all about the thefts as he’s a difference-maker in that category.

Reggie Evans, PF, Sacramento Kings (ESPN: 5.8 per cent; CBS: 7 per cent): After having seven straight DNPs in the second half of November, Evans is having an awesome December. Over the past two weeks, he’s had three games of at least 13 rebounds and is averaging 10 boards. You would like to see Evans’ scoring go up (only one double-double in that span) but the rebounds are gold.

Boris Diaw, PF/C, San Antonio Spurs, (ESPN: 11.5 per cent; CBS: 36 per cent): Tim Duncan is getting fewer and fewer minutes, and Diaw can shoot and rebound decently. Diaw is the kind of dude that always seems to be on the periphery of Fantasy value, so you’ll tend to find him on The Wire Troll a few times a season (this is his second appearance already this season). Bear in mind that he was getting a chance to start earlier this season when Tiago Splitter was hurt.

Luis Scola, PF, Indiana Pacers (ESPN: 7.5 per cent; CBS: 29 per cent): Scola, who always seems to shine in international play, is starting to find that groove again in the NBA. After beginning the season as a starter, he’s come off the bench the past eight. The weird things is, Scola lost one-quarter of his PT, yet his production has gone up. In fact, all of Scola’s numbers are on the rise, except his shooting and rebounding (yet he’s still averaging over seven rebounds). With less time on the court, he has been giving his all and playing more efficiently.

Bismack Biyombo, C, Charlotte Hornets (ESPN: 0.5 per cent; CBS: 3 per cent): Biyombo is a block specific guy, averaging almost 1.5 in limited time. His rebounding isn’t bad, but his scoring will hurt you. If you need swats, however, Biyombo is a nice guy to add.

Rudy Gobert, C, Utah Jazz (ESPN: 1.5 per cent; CBS: 16 per cent): Derrick Favors went down with an injury in the opening quarter of Friday’s game, Gobert stepped up and played well in a larger role, setting career highs in assists (four) and blocks (five), and a season high in rebounds (11). This, after setting his career high in points on Monday. Gobert’s shooting percentage is insanely high and he holds the NBA record for largest wingspan (7’11”) and standing reach (9’10”). He will make a nice Fantasy impact and with the Jazz having its annual Christmas road trip coming up, he will have a lot of court time to prove he belongs on your squad.

By McCade Pearson
Tags: Golden State Warriors, Stephen Curry
This entry was posted on Sunday, December 14th, 2014 at 3:18 pm and is filed under BASKETBALL, McCade Pearson, The Wire Troll. You can follow any responses to this entry through the RSS 2.0 feed. Both comments and pings are currently closed.