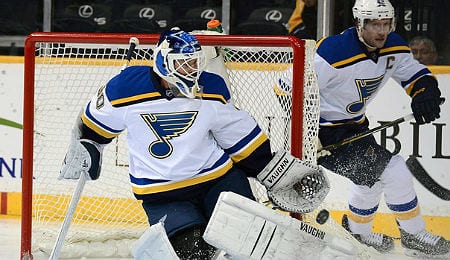 It sure is strange seeing Martin Brodeur in a new uni. (Mark Zaleski/The Associated Press)

This week, we’ve got a nice mix of aging vets, rising youngsters and rugged in-betweens that have made their mark on the league over the past seven days. We’ll start with the aging vet, who’s eager to prove he can still play at a high level in the best hockey league on the planet. We believe he’s making a serious case.

Martin Brodeur, G, St. Louis Blues (ESPN: 25.1 per cent; CBS: 39 per cent): Don’t let Brodeur’s .904 save percentage fool you — it took just one game for one of the all-time greats to get back into the swing of things. Since then, the former Devil has collected two wins, a 1.88 goals against average and a .937 save percentage. With normal starter Brian Elliott on the shelf, Jake Allen is currently St. Louis’ leading man, but we expect to see Brodeur receive more starts as the club’s confidence in him grows. It goes without saying, but keep your eyes on him. Need a reminder of what Brodeur has done in his storied career? Check out the video below.

Mika Zibanejad, C/RW, Ottawa Senators (ESPN: 10.5 per cent; CBS: 21 per cent): The former sixth overall pick had a very solid week, collecting three goals, five points, a plus-2 rating, one power play point, 13 shots on goal, 17 face-offs won, two hits and one block in Week Nine. He has eight goals, 14 points, a minus-2 rating and 50 shots on goal through 27 games this season. Just beware that this dude is streaky, but when you can get him on a roll, he’s a great addition.

Mathieu Perreault, C, Winnipeg Jets (ESPN: 1.1 per cent; CBS: 5 per cent): Perreault had a very respectable week, scoring a goal and four points with three power play points, nine shots on goal, seven face-offs won, six hits and a blocked shot. Through 30 games played, he has four goals, 12 points, a minus-2 rating and 57 shots on goal. Perreault seems to have developed some nice chemistry with Michael Frolik.

Barret Jackman, D, St. Louis Blues (ESPN: 0.6 per cent; CBS: 3 per cent): Jackman is known more for his ability as a rugged shutdown defender than he is as a reliable Fantasy producer. However, he quietly put up some solid numbers in Week Nine with a goal, four points, a plus-7 rating, five penalty minutes, three shots on goal, four hits and seven blocks. In 30 games this season, Jackman has one goal, nine points, a plus-4 rating and 27 shots on goal.

Adam Lowry, LW, Winnipeg Jets (ESPN: 0.0 per cent; CBS: 2 per cent): As a rookie, Lowry has had his ups and downs this season, but signs indicate he could be coming into a solid stretch of play any time now. The 6’5″ 207-pounder has four goals and seven points this season, including two goals, four points, a plus-2 rating, a power play point, a game-winning goal, seven shots on goal, 15 face-offs won, an impressive 16 hits and three blocked shots in Week Nine.

No. 3. Antti Niemi, G, San Jose Sharks: Niemi played just one game last week, but it was enough. Through 60 minutes, the former Stanley Cup winner stopped all 29 shots faced for the shutout victory.

No. 1. Martin Jones, G, Los Angeles Kings: After we gave him a glowing recommendation last week, Jones let in a whopping six goals on 20 shots through 60 minutes played last week. For those at home keeping track, that’s a 6.00 goals against average and a .700 save percentage. Woof. Sorry, Marty. We didn’t mean to jinx you.

No. 2. Ryan Miller, G, Vancouver Canucks: Miller makes his second straight appearance as one of our “Duds of the Week.” It’s easy to see why when you look at his 3.53 goals against average and .851 save percentage in two starts last week.

And that’s our coverage of Week Nine. Tell us how you did last week or what you think of our picks in the comments section below.

It is tough not to rank the reigning Vezina winner number one but, hey, just watch us. Why? The late season swoon Lundqvist had was too much to ignore. In Fantasy crunch time (from March on), he posted a meager .895 save percentage and was well rested. Add in the burdens of being a new father and you have to wonder how he will respond. Lundqvist did end up with 39 wins and a .930 save percentage last season — not too shabby. With the shortened schedule, he could see around 38-to-40 starts and produce Vezina-caliber numbers.