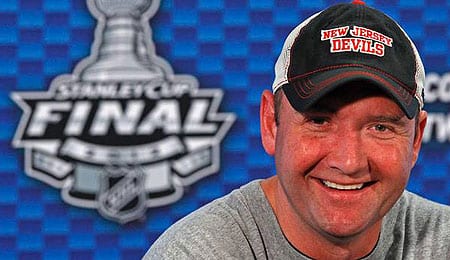 Can Peter DeBoer guide the Devils to an historic comeback?

On Saturday, the New Jersey Devils once again staved off elimination, sending the Stanley Cup Finals back to La-La land where on Monday night the Kings will try to make their third crack at wrapping up their first championship count.

As a reminder, if Monday is indeed the final game, you have until the end of the first period to enter our contest. Correctly pick the Conn Smythe Trophy winner (playoff MVP) and you’ll have a shot at taking home our $190 prize pack, consisting of a Hockey Night in Canada jersey and a copy of NHL 12. Enter the contest here.

Obviously the Devils are feeling much better about a 3-2 series deficit than they were when they faced the daunting 3-0 hole, but New Jersey coach Peter DeBoer isn’t ready to suggest that bouncing back from three games down is somehow easier these days.

When asked if a 3-0 deficit isn’t quite as insurmountable in this era, he replied: “You know what, I don’t know. That’s for you guys to debate and talk about. Like I said when we got down 3-0, we didn’t feel we belonged in that hole. We felt we were better than the spot we were in. We’re trying to claw our way out. That’s for you guys to decide the magnitude of it and how important it is, where it fits in the history of it.”

DeBoer doesn’t think the Kings lost their composure in Game Five, but he did see that “you could see some frustration.”

That’s a relatively new phenomenon for the Kings – certainly in these playoffs, that have been like a storybook. Until the past few days, that is.

But it’s a state the Devils obviously want to drive the Kings to. “That’s the spot we want to put them in. We want to keep that pressure on them,” DeBoer said.

One reporter compared Zach Parise to Sidney Crosby in terms of having ability that matched his compete level. DeBoer took the bait: “Yeah, that’s fair. They have a lot of similarities. Both smaller in stature than players like (Jarret) Stoll and (Anze) Kopitar, but so strong on the puck. They play a power game combined with skill. I think that’s a fair comparison, especially in what he brings for us.

DeBoer admitted that the Devils were motivated by the time-to-celebrate environment of Game Four in Los Angeles.
“Sure, that’s motivation. When your bus has to pull by the 10 limos parked on the road for the after party, that’s definitely a motivation.”

DeBoer also talked about Martin Brodeur’s influence in helping the Devils make a series of this.

“It’s how he carries himself, how he interacts. He’s unflappable. You never see the pressure, the situation we’re in. That’s contagious to the guys in the room, around him, and how we play.”

It’s been 70 years since a team last came back from a 3-0 deficit in the Stanley Cup Finals. If the Devils win Monday night to force Game Seven back in Jersey on Wednesday, all bets are off.

The Kings aren’t really doing anything differently, but in the past two games they aren’t getting the same kind of breaks that have followed them around all spring. It’s the Devils who seem to be getting the bounces right now.

Of course, it’s not as if this Los Angeles squad is new to adversity – it’s faced it all season long, and throughout the playoffs as massive underdogs in each series it’s played.

But with just two goals in the past two games, the Kings new to rediscover their offensive touch, especially with Brodeur on top of his game right now.

Kopitar has just two shots on goal in the past four games combined. Mike Richards has just two assists in the whole series. Captain Dustin Brown, the team’s best player in the first three rounds, has just one assist in the Finals and has seen his PT slip in recent games.

That trio, among others, will need to make contributions pronto or the only history the Kings will be making will be as an all-time choker.

With the regular season winding down, it’s time to look ahead to a unique beast of its own — playoff pools. Playoff pools are always a crapshoot, since one unpredictable upset could mean that you’re essentially done. It’s also difficult to project long-term because even if you get a lot of points in the first round, sheer attrition will knock some of your players out of the lineup. How can you navigate this minefield? Well, there’s no surefire way, but here are some general guidelines to go by.

There’s a good chance that Tavares will finish the season better than his awful recent stretch, but don’t look for him to suddenly ignite everything he touches.

The trade deadline has passed, but the biggest moves happened well before the Olympics. Still, enough moves happened to affect depth charts all around, and if you’re in the stretch run of your Fantasy league, you know that it’s all about secondary scoring. Hey, isn’t that how the NHL works too?