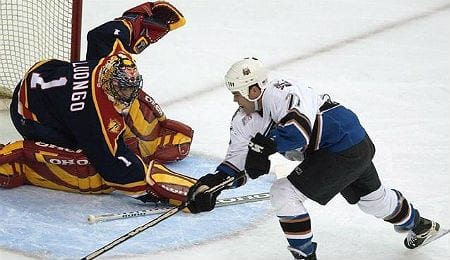 Roberto Luongo is one of several Panthers who have periodically enjoyed success against Boston. (Vancouversun.com)

Whether by coincidence or by design, the Florida Panthers are putting together a team full of players who hold bad memories for the Boston Bruins. With the two teams battling it out for the last playoff spot in the Eastern Conference, and little to choose between them in the betting, there is all to play for in the last few weeks of the regular season. As ever, qualification for the playoffs will come down to fine margins and, with some of the signings that the Panthers have made in recent seasons, they will be hoping to hold the psychological edge over the Bruins.

The Panthers’ most recent trade acquisition, for example — Jaromir Jagr — who arrived in exchange for a second round pick and a conditional third rounder from the New Jersey Devils, was once touted as a great hope for the Bruins. Having been dealt to Boston in April 2013 in exchange for two prospects and a draft pick, Jagr was part of the team which reached the Stanley Cup final, but the Czech legend didn’t live up to his billing as he failed to score a single goal in 22 postseason games. He was released just over two months after being traded to Boston. As a future Hall of Famer, this snub will have hit Jagr hard and he will be desperate to prove to his former employers just what they missed out on. On Sunday — in just his second game with Florida — he potted his first goal, the 717th of his career to tie Phil Esposito for fifth place all-time (see video below).

In addition to Jagr, the Panthers roster also includes former Bruins enforcer Shawn Thornton who was so disgruntled at being released that he turned up for a preseason Bruins meet up in full Panthers gear. You can bet he will be desperate to deprive his old team of the eighth spot. Brad Boyes and Steven Kampfr were also deemed to be surplus by the Boston management, and they will feel like they have a point to prove when the two teams meet in the Sunshine State on March 21.

As well as several former Bruins, the Panthers can also boast a number of Bruins’ tormenters on their roster. Players like Roberto Luongo, who so nearly led the Canucks to Stanley Cup final glory over the Bruins in 2011, achieving two shutouts in the 4-3 series defeat, was traded from Vancouver in 2014. At the other end of the ice, Jussi Jokinen has the measure of the Bruins, having scored the first goal for the Carolina Hurricanes in their conference semifinal victory back in 2009.

Now it’s your turn. Let us know in the comments below how you think the Eastern Conference playoff race will shake out.