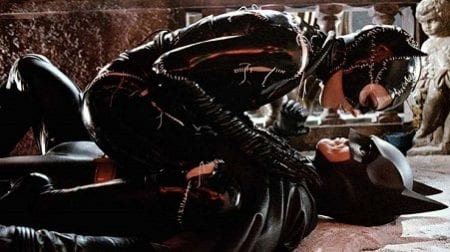 Believe it or not, there was a time when multiple superhero movies weren’t released every year covering nearly every comic book character you could think of. In fact, outside of a few Superman movies it was barren for most of the 1980s. Into that void stepped director Tim Burton and Michael Keaton, fresh off the odd comedy Beetlejuice, along with Jack Nicholson to bring Batman to the big screen… and in many ways that set the stage for the current cinematic landscape.

We noted that Forever took things in a family-friendly direction, but this one feels more like a live-action cartoon with its snarky dialogue and goofy aesthetic — not coincidentally, this is the only film that has no involvement from Burton, who was a producer on Forever. After watching it you’ll have no trouble figuring out why it bombed at theatres and why audiences wouldn’t get another Batman film until Christopher Nolan‘s Batman Begins almost a decade later.

One of the best things that the UHD treatment does for the early Batman films is add clarity to all of the dark and gloomy settings. The increase in detail is excellent, and there isn’t much grain to be found, which is an impressive feat given the age of these movies. Colours also pop, something that’s particularly noticeable with the outfits for villains like Joker and Riddler — and yes, the Catwoman suit pops, too. The audio mix sounds first-rate, especially in the earlier films in which Elfman’s score blares through the speakers.

It was important that Justice League produced a new star for the franchise, and Miller is the one. He gets to be a “fan boy” in the same way the rebooted Spiderman is for Avengers, cracking jokes and basically saying the type of stuff a normal person pressed into extraordinary circumstances would.