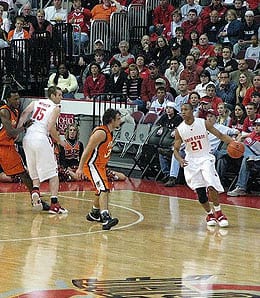 Evan Turner (right) is projected to go second to the 76ers.

Here is our Mock for the upcoming NBA Draft.

1. Washington Wizards — John Wall, PG, Kentucky: Wall is often compared to Derrick Rose and Russell Westbrook, but he is already superior physically. Besides being lightning fast and aggressive, Wall has the wingspan (6’9”) to dominate from day one and should be able to guard almost any guard in the game. He will need to improve his perimeter game, but Washington is a blank slate that Wall can write his legacy all over.

2. Philadelphia 76ers – Evan Turner, SG/SF, Ohio State: Turner is a fluid swingman that created his own shot in college, but that might be an issue in the NBA given his 6’8” wingspan. He’s a tremendous ball handler, but with that comes a tendency to over-dribble. When you over-dribble you normally turn the ball over a lot and that will certainly be a problem at the pro level. Philadelphia needs a SG like Turner and I think he can flourish if he fixes his ball handling problems.

3. New Jersey Nets – Derrick Favors, PF/C, Georgia Tech: Favors can defend and rebound with the best of them, but his offensive game needs some serious attention. If he can bulk up he can make the move from PF to C, and since he is the youngest player in the draft (18) that shouldn’t be an issue. Favors is often compared to Chris Bosh (a former Yellow Jacket himself) and Nene and that should fit in well with New Jersey’s young nucleus of players.

4. Minnesota Timberwolves – DeMarcus Cousins, C, Kentucky: Simply put, Cousins is an amazing specimen. He stands 6’9” without shoes and has a ridiculous 7’5 ¾” wingspan. Cousins looks far better than Dwight Howard at the same age, but there are conditioning concerns (16.3 per cent body fat) and he has some off-court red flags which may be hurdles in his career. If he can put it all together, Cousins could easily be the second-best player in the draft.

5. Sacramento Kings – Al-Farouq Aminu, SF/PF, Wake Forest: For being 6’7”, Aminu has a freakishly long wingspan of 7’3 ¼”. There are concerns after he failed to impress in the interview portion of the NBA combine, but Aminu runs the floor, competes hard on the defense and is an excellent rebounder. If he improves his perimeter shooting and ball-handling skills, he will take the starting spot from Omri Casspi from day one.

6. Golden State Warriors – Wesley Johnson, SF/PF, Syracuse: Johnson has the size to be an ideal SF, but he doesn’t handle the ball extremely well and looks more like a complimentary player than a potential star. He has trouble creating his own shot and his age (22) concerns me as it relates to his long-term upside.

7. Detroit Pistons – Cole Aldrich, C, Kansas: Aldrich has the size and body to be a centre in the NBA, but comparisons to Joel Przybilla have me worried. Aldrich is a tremendous rebounder that is possibly the most physical player in the draft, but he is likely a role player in the NBA due to his offensive limitations.

8. Los Angeles Clippers – Epke Udoh, PF/C, Baylor: Udoh may end up being a role player in the NBA given the fact that he is 23, but he is highly active in the paint on both offense and defense. On the defensive end, Udoh is NBA ready, but I keep going back to his age as my major concern about his development.

9. Utah Jazz – Greg Monroe, PF/C, Georgetown: Monroe looks likely to be the best available player on the board when the Jazz pick at No. 9. His measurements (6’ 9 ¾” without shoes, 247 pounds and a 7’ 2 ¼” wingspan) make him a prime candidate to take over for Mehmet Okur, but he is not very athletic and he has troubles with his off hand.

10. Indiana Pacers – Ed Davis, PF, North Carolina: Davis has good hands, a high basketball IQ and a wonderful touch around the basket. He does show potential as both a rebounder and shot-blocker, but is not very skilled or assertive offensively. I see him as more of a complimentary piece in the NBA.

11. New Orleans Hornets – Patrick Patterson, PF, Kentucky: New Orleans has David West already, but Patterson is a aggressive down low and athletic enough to play PF despite being just 6’8”. Patterson relies too much on his natural tools at times, particularly on the defensive end, and he will need to really work hard to take the next step in the NBA.

12. Memphis Grizzlies – Donatas Motiejunas, PF/C, Benetton Treviso (Italy): Motiejunas hails from Italy and has the shot we all expect from a European player. But he isn’t the toughest player I’ve ever seen, often struggles on the defensive end, is an extremely poor rebounder and is easily frustrated when things don’t go his way. I am getting horrific flashbacks of Darko Milicic.

13. Toronto Raptors – Daniel Orton, C, Kentucky: With Bosh probably gone from Toronto this offseason, I look at the Raptors to take Orton at No. 13. Orton weighed in with a 13.8 per cent body fat at the NBA combine, which means there are conditioning concerns already. The main issue I have is his lack of playing time behind Cousins in his only season in college. I see comparisons to Erick Dampier, but I am thinking more along the lines of Kwame Brown.

14. Houston Rockets – Hassan Whiteside, PF/C, Marshall: Whiteside led the NCAA in shot-blocking as a freshman and is an excellent rebounder. Not only that, but he has one of the longest wingspans in NBA pre-draft camp history at 7’7”. The concerns with Whiteside are his feel for the game, his fundamentals are raw at best, he is a poor passer and his thin frame makes him a project on both ends of the court. He also has some fairly major off-court red flags.

15. Milwaukee Bucks – Xavier Henry, SG, Kansas: Henry is an excellent shooter with deep range on his jumpshot. His best attributes are his high basketball IQ and his unselfish play, but he doesn’t create his own shot enough and has trouble moving side-to-side on the floor. His career in the NBA is going to come as a role player and he might fade into the background in Milwaukee.

16. Minnesota Timberwolves – Damion James, SF/PF, Texas: With their second pick, the Timberwolves may look at James here. He isn’t great in any specific area, but he is used to being the star and go-to guy in college and I see him as a role player in the NBA. James plays extremely hard and is good on the glass, but you don’t expect star quality when you get to this point of the draft.

17. Chicago Bulls – James Anderson, SG/SF, Oklahoma State: Anderson was one of the best scorers in college basketball last season, but he has average athleticism and that may hamper him in shooting off the screen in the NBA. Anderson is a pure shooter with well below average defensive skills, so he will likely wind up as one of those instant offense players off the bench.

18. Miami Heat – Gordon Hayward, SF/PF, Butler: Hayward is one of the most highly debated prospects in this draft. Butler’s miraculous NCAA tournament run put him in the spotlight despite his lack of athleticism, defensive potential and body frame. Look for Hayward to be a perimeter shooter in the NBA.

19. Boston Celtics – Stanley Robinson, SF/PF, Connecticut: Robinson is a combo forward that is super athletic and has playmaking ability in transition due to his freakish physical tools. He could end up being a Gerald Wallace type of player, but he will need to improve his consistency and polish up his game before that will happen. Boston is a great place for him to land because the Celtics are going to have to start replacing their aging players at the SF and PF spots soon.

20. San Antonio Spurts – Luke Babbitt, SF, Nevada: Babbitt has a high basketball IQ and can knock down the 3-pointer, but he was an iffy defender in college and that can lead to major playing time issues in the NBA. There are more questions than answers when it comes to how his skills will translate to the NBA and he can only hope the Adam Morrison comparisons are wrong.

21. Oklahoma City Thunder – Solomon Alabi, C, Florida State: Alabi has ideal size (7’1”) for an NBA centre and he has made considerable strides the past few seasons in his game development. If he lands in Oklahoma City, he should thrive with his superb defensive skills, but his rebounding leaves a lot to be desired from a 7-footer and he will need a few years to develop his raw skills. Hasheem Thabeet just may have re-entered the NBA draft.

23. Minnesota Timberwolves – Paul George, SF/PF, Fresno State: George was a member of an extremely bad Fresno State team last year, but he is drawing strong comparisons to Wilson Chandler. Goerge showed an ability to get his shot off at will, but he is an average ball handler that is going to be very turnover prone in the NBA. I see George as a rotation player at best.

24. Atlanta Hawks – Kevin Seraphin, C, Cholet (France): Seraphin is an interesting 20-year-old French player. He’s been compared to Nicolas Batum with his defensive skills, but he has only been in basketball for five years and that means he is developmentally behind his peers in terms of basketball skills. Seraphin is a player that an NBA team can mold into their own image, but he is too raw to know what he will grow into.

25. Memphis Grizzlies – Eric Bledsoe, PG/SG, Kentucky: Bledsoe fits the bill when looking at NBA PGs, but he is not a very good ball-handler and his offensive skills are iffy. He is extremely turnover-prone, so I can see significant time in the NBDL for Bledsoe.

26. Oklahoma City Thunder – Elliot Williams, SG, Memphis: Williams is an athletic combo guard with the type of scoring instincts and the ability to create his own shot that scouts want in NBA these days. He is solid on defense, but this lefty has troubles using his off hand and he doesn’t finish around the basket. Williams is going to be a bench player if he makes the NBA roster.

27. New Jersey Nets – Willie Warren, SG, Oklahoma: Warren has great scoring instincts, but he is a streaky shooter, a weak defender and small (6’4”) for an NBA SG. He will have to work on his shot selection and decision making at the next level and his attitude also needs improving as it has plummeted his draft stock.

28. Memphis Grizzlies – Avery Bradley, SG, Texas: Bradley is just 6’3”, which means he is in a worse position than Warren as far as playing the two in the NBA. He doesn’t create his own shot and lacks playmaking ability, but he has improved his mid-range game and 3-point shot in his one season in college. He is a project for sure.

29. Orlando Magic – Quincy Pondexter, SF/PF, Washington: At 22 years old, Pondexter is young for a college senior, but he is a great rebounder that can defend both forward positions. He is so young that he can still develop his ball-handling skills and I could see a scenario where he actually moves up the draft board given his age and maturation he’s shown in his four years at Washington.

30. Washington Wizards – Devin Ebanks, SF/PF, West Virginia: Ebanks will be a defensive specialist in the NBA, in my opinion. There are too many questions about his offensive upside and off-court decision making, so don’t expect too much from this pick in terms of his future development. Think Jared Jeffries…if that.

By James Morris
This entry was posted on Tuesday, May 25th, 2010 at 4:01 pm and is filed under BASKETBALL, James Morris, Mock drafts, Prospects. You can follow any responses to this entry through the RSS 2.0 feed. You can skip to the end and leave a response. Pinging is currently not allowed.