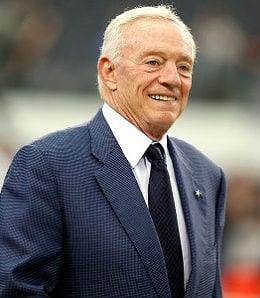 Jerry Jones is allegedly embroiled in a sextortion plot. (Sportsblogs.star-telegram.com)

On this week’s episode of RotoRob Fantasy Football Weekly Podcast, heard every Wednesday at 1:30 p.m. EST on Blogtalkradio, Nick Wagner and Josh Johnson were joined by RotoRob.com’s own J.R. Anderson and Michael Seff as we sifted through the running back position in search of hidden gold.

Among the topics we lathered up:

Appearing on next week’s Podcast (which, next week only, will be on Tuesday instead of Wednesday — but at the usual time) will be Dan Heins of the Dynasty Football Warehouse.

By the looks of it, Gentile is a solid stash player for Houston. As long as he can develop some sense of how to play defense, he may be able to someday turn out some good minutes in the NBA.

Now that the 2014 NBA Draft is complete, it’s time to analyze things and offer up grades for each team. We’ll start with the Eastern Conference.