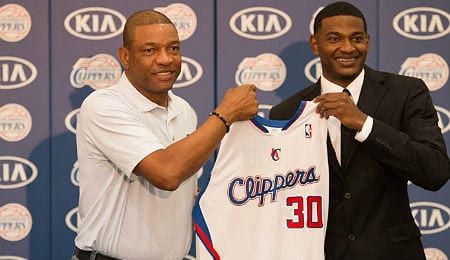 In the final chapter of our 2014 NBA Draft series, we have our red pens and gold stars ready as we take a look at the Pacific Division.

C.J. Wilcox, SG, Washington Huskies (No. 28): What do you do when you have a plethora of capable guys that like to shoot the rock and are pretty good at it? Why, draft another one, of course. Don’t worry about the lack of depth in your frontcourt, that shit will work its way out because you know quality rim protectors and big bodies are a dime a dozen in the NBA. If by now you have not picked up on the sarcasm, maybe ESPN is what you are looking for. We hear they have top notch analysis over there. None of this is meant to knock Wilcox — the kid can shoot (see video below)! He is also a more than capable ball-handler with the smarts to someday make his way into a rotation, just not yet in L.A.

Julius Randle, PF, Kentucky Wildcats (No. 7): After a scare with his foot, Randle surprisingly fell to the Lakers at No. 7. The basketball gods must be looking down at this ultra-talented, multi-faceted power forward out of Kentucky. He may not start right away for Byron Scott’s squad with the signing of Carlos Boozer, but it won’t be long until Randle proves his worth and makes some contributions to this under the radar squad. Trust us when we say that the Zach Randolph comparisons are real, but why stop there? The sky is the limit.

Jordan Clarkson, PG/SG, Missouri Tigers (No. 46; drafted by Washington and traded to L.A.): Some have called Clarkson a potential steal, but we simply refer to him as Jordan “Holy shit, I can’t believe this guy was drafted in the second round” Clarkson. Years down the road when this guy becomes a stud and Fantasy roster regular, you will look back at the 2014 NBA draft and many names will become synonymous with the word bust and others will be household names and you will think back to this particular article and this particular writer and you will look him up on the Internet and see all the super awesome writing awards he won and smile because he put this kid’s potential in your head and you drafted him as a sleeper a couple years later and he helped you to win your first Fantasy basketball league. All this will be true if Clarkson doesn’t turn the ball over more times a game than Kobe Bryant gives Nick Young the death stare.

T.J. Warren, SF/PF, N.C. State Wolfpack (No. 14): Phoenix seems like a team on the edge of going from overachievers to bona fide playoff contenders. It seems fitting that Warren ends up there as he has no one really strong attribute but has that intangible that people refer to as “it.” If he gets the time and coaching he deserves, this kid can be a good player for a good long time.

Tyler Ennis, PG, Syracuse Orange (No. 18): Phoenix is well aware of its impending free agency problems and did what any good franchise would do by drafting a back-up plan in the form of Ennis. Goran Dragic is hardly a sure thing to remain in the desert and Eric Bledsoe has yet to prove he can stay healthy enough to justify earning big bucks in a long-term contract. Isaiah Thomas is along for the ride as well, but Ennis is skilled enough to crack a rotation and eventually prove his worth if both Bledsoe and Dragic decide to head for colder climates.

Bogdan Bogdanovic, SG, Serbia (No. 27): With three first round picks, why not take a shot on a highly skilled draft and stash player like Bogdanovic? Not every player can be a starter right out of the gates, but some can turn into solid NBA assets after some overseas seasoning.

Alec Brown, C, Wisconsin-Green Bay Phoenix (No. 50): A seven-footer that hits threes? Why the hell not this late in the draft? Sleeper potential at its finest as Brown goes from playing for the Phoenix to playing in Phoenix.

Nik Stauskas, SG, Michigan Wolverines (No. 8): Stauskas is probably not the guy we would have taken here, especially with Darren Collison as your PG and Elfrid Payton still on the board. Different strokes for different folks, we guess. Have a great season, Kings fans. We’ll see you at the lottery again next year!

Now it’s your turn. Let us know in the comments below how you think your favourite Pacific Division did in the draft..