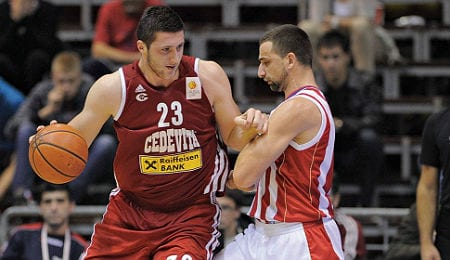 Jusuf Nurkic (left) will need to polish his game before he’s ready to be an NBA player. (rtvlukavac.ba)

Our 2014 NBA Draft analysis continues today as we head up to the Northwest Division to assess each of team’s draft classes.

Jusuf Nurkic, C, Bosnia and Herzegovina (No. 16) (drafted by Chicago and traded to Denver): If not for Timofey Mozgov’s second half breakout, trading back in the draft for a guy that can crash the boards and step out and hit a jumper with the ability Nurkic has would have make complete sense. We are just not convinced that Nurkic is polished enough yet to supplant the guys ahead of him on the depth chart. This is likely a “stash and see” scenario that has little chances of making Denver look smart in the future. We originally expected Nurkic to go 15th overall, so his selection at 16 (see video below) was pretty much right on the money.

Gary Harris, SG, Michigan State Spartans (No. 19) (drafted by Chicago and traded to Denver): A legitimate two-guard with a sweet shooting touch and lockdown capabilities on the defensive end and Denver snagged him at 19? That, friends, is the epitome of a steal! The acquisition of Arron Afflalo means Harris will likely come off the bench to begin the season, which isn’t a bad thing at all as it gives the kid some time to learn the NBA game. This pick is McDonalds… I’m lovin’ it!

Nikola Jokic, PF/C, Serbia (No. 41): If not for Timofey Mozgov’s second half breakout, trading back in the draft for a guy that can crash the boards and step out and hit a jumper with the ability Nurkic… wait, Jokic. Hold up. Is this not the exact same type of player Denver took super early in round one? Are the Nuggets just absolutely convinced there are not any NBA-ready players that are capable of contributing right now? Jokic is not quite as seasoned as Nurkic, but neither guy is making a splash in the NBA any time soon.

Zach LaVine, PG/SG, UCLA Bruins (No. 13): Hey, T-Wolves fans: guess what? Your team just drafted another PG! Well, sort of… LaVine is more of a combo guard with freakish athleticism who can jump really, really high. That sort of description could be attached to thousands of college prospects over the years; some pan out and some don’t. The real key to LaVine’s development will be coaching and he will have one hell of a mentor in Flip Saunders. If LaVine buys into what the Wolves are trying to build in Minnesota and does what he can to help that building process, you could be looking at a future All-Star. He is that good.

Glen Robinson III, SF, Michigan Wolverines (No. 40): Minnesota finished up draft night by snagging a much needed wing player with a lot of potential and enough polish to contribute right away in Robinson III. He looks the part of an NBA player, solid frame and smooth shot, but for some reason or another he failed to consistently grab the spotlight at Michigan and show the NBA scouts he was worthy of anything more than a second round pick. As with fellow draftee LaVine, Saunders will mold Robinson III into a solid player that will be around for many seasons to come.

Mitch McGary, C, Michigan Wolverines (No. 21): Injuries and a little hit of the Zig-Zag smoke sent McGary’s stock tumbling on draft night and it may have actually helped his cause more than it hurt it as he now finds himself on a Western Conference power, the Oklahoma City Thunder. This kid is big and his skills are rare coming from such a huge frame (6’10”, 255). McGary can create not only for himself, but others as well. This should come in handy for a team flush with deadly scorers such as Kevin Durant and Westbrook. McGary is an instant upgrade over Nick Collison and Kendrick Perkins on both ends of the court.

Josh Huestis, SF, Stanford Cardinal (No. 29): Players like Huestis are typically available deep into the second round of the draft, so taking him late in the first really makes no sense. He’s not the worst player ever taken this early, but certainly OKC could have done better.

Dante Exum, PG/SG, Australia (No. 5): Having been compared to everyone from Kobe Bryant to Leandro Barbosa, the enigmatic Exum has a lot of hype to live up to. It’s an almost impossible amount of expectation to put upon this kid with very little international basketball experience and a weak jump shot. At the very least, Exum was fortunate to land in Utah, far away from the glaring spotlight of a major market city such as Los Angeles where every growing pain would have been hyper-analyzed and criticized. This kid will have time to grow in the mountains of ”The Beehive State” and could end up closer to the Bryant spectrum of his comparisons rather than the Barbosa end.

Rodney Hood, SG/SF, Duke Blue Devils (No.23): Hood should contribute nicely for a young Utah squad that seems to be trending upward even more after a solid draft.

Now it’s your turn. Let us know in the comments below how you think your favourite Northwest Division did in the draft.

By J.R. Anderson
Tags: 2014 NBA Draft
This entry was posted on Friday, August 15th, 2014 at 9:25 pm and is filed under BASKETBALL, Draft report, J.R. Anderson, Prospects. You can follow any responses to this entry through the RSS 2.0 feed. Both comments and pings are currently closed.