By Jake Watroba and RotoRob

The 2013 RotoRob Awards season wraps up with our hardwood hardware. 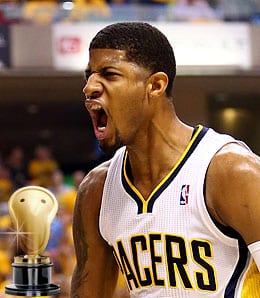 Paul George is stoked about his hardware. (Sportsrivalsandtrashtalk.com)

Paul George really started to show us what he was all about in the second half of last season and most notably the postseason when he nearly lead the Indiana Pacers to the NBA Finals. Fast forward to the 2013-14 season and he has been dominant and is one of the biggest reasons the Pacers sit alone atop the Eastern Conference. While Kevin Durant is stuff the stat-sheet good since Russell Westbrook went down with an injury, George has been the best player in Fantasy basketball for our money, certainly relative to his draft slot. Since the beginning of the 2013-14 season, we’ve seen George become a bigger threat from behind the arc and improve his shooting from the field as well as the charity stripe. Sure, his assists and rebound numbers are down a tad from a season ago, but his points per game are up. George is taking more shots this season and is also finding a way to get to the free throw line more than he did a year ago. To this point, he is arguably the MVP of the NBA. While that kind of hardware isn’t given out until the end of the season, we’ll gladly give George our Fantasy Stud of the Year award for 2013. — JW 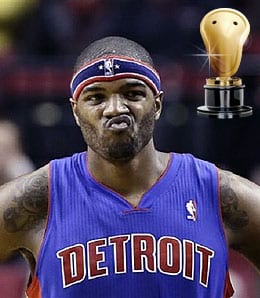 The look on Josh Smith’s mug tells you how things are going in Motown. (Don Ryan)

After enjoying the finest season of his career in 2011-12, Josh Smith let us down somewhat last season, but his major dropoff in this — his first season in Detroit — cinches the 2013 RotoRob Fantasy Dud of the Year horns for J-Smoov. Last season, his turnovers rose while his scoring dipped — a bad combination. But the move to the Pistons seems to have really taken the Fantasy friendliness out of Smith’s game — at least relative to the investment you likely had to make to land him. He’s lost 1.5 rebounds per game, he’s shooting under 40 per cent for the first time in his career, he’s down almost an assist per game, his blocks are down a tad, and his scoring has dipped to its lowest level since his sophomore season way back in 2005-06. Sorry, but there’s nothing Smooth about the way Smith has screwed his owners in 2013 — especially in the first half of this season. — RR

Michael Carter-Williams wasted no time in establishing himself as the real deal. (Philly.com)

Damian Lillard’s rookie performance from a year ago is a hard act to follow for the 2013-14 freshman classs — especially when you consider that the 2013 NBA Draft was deemed a weak draft class by many experts, and rightfully so. As we write this, we’re glancing over the list of players that were selected, and it’s quite underwhelming. However, there is one rookie that has managed to make a name for himself early on this NBA season — Michael Carter-Williams. MCW, as the kids say, didn’t waste any time to strut his stuff this season. In his first ever NBA game, he nearly dropped a quadruple-double on the Heat as he put up 22 points, seven rebounds, 12 assists and nine steals. Um, welcome to the NBA, kid. Besides his lackluster 29.3 three-point percentage, MCW looks to be player that will blossom into an all-around NBA point guard. There isn’t one area in his game that is amazing with others that suffer — rather, Carter-Williams does almost everything really well. Ten other teams may be kicking themselves for passing on him come season’s end. — JW 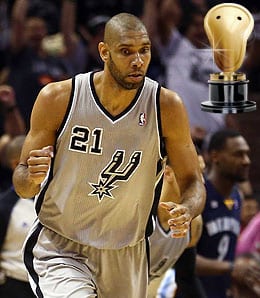 There were a couple of good candidates for this honour, but given his age and the stage of his career he’s at, this has to go to Tim Duncan of the Spurs. His career had been in gradual decline since 2006, and while he played slightly better in 2011-12, there had been no hint of what was to come in 2012-13 when — at the age of 36 — hit PT rose back over 30 MPG, his touches were up, he shot better, he enjoyed his finest season ever at the charity stripe, he flirted with double digits in rebounding per game, his assists were up, his blocks were way up (back to his prime years) and he scored almost 2.5 points per game more. Okay, so he’s given most of those gains back in the first half of 2013-14, but wow. The Big Fundamental took a big sip from the Fountain of Youth in 2013. — RR 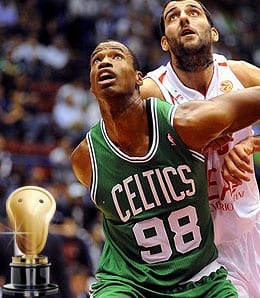 You think it takes guts to stand in the lane and take a charge when LeBron James is bearing down on you? Or that it’s ballsy to try to posterize Dwight Howard with his propensity to throw block party? Meh. What takes real guts is what Jason Collins did last year when he became the first professional athlete in a major North American league to come out and admit he was gay. The fact that he hasn’t played in the NBA since speaks volumes, but then again, it’s not as if Collins was ever a star, so it’s tougher to gauge whether he’s truly being blackballed by the league. While what he’s done here isn’t exactly on par with Jackie Robinson’s exploits, it’s an incredibly important step in the evolution of mankind and deserves a RR Award. And in recognition of Collins’ courage, we’re not even going to crack a joke here. — RR 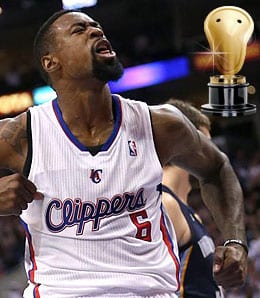 DeAndre Jordan went into beast mode for his hardware. (Myfaction.com)

Speaking of getting posterized, poor Brandon Knight of the Detroit Pistons made the mistake of trying to defend Los Angeles Clippers centre DeAndre Jordan on one of the Clips’ famous Lob City plays. What really blows us away when you see the dunk in the video below, is how loud it is. Jordan really announced his presence on this one, earning some coveted RotoRob hardware for his efforts. — RR 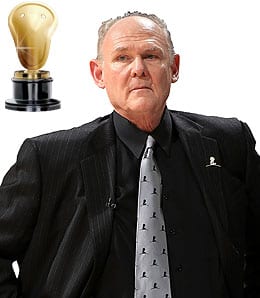 Being the best coach in the NBA means job security, right? (Hallpassnetwork.com)

Some people place a lot of stock in winning awards. For others, awards mean crap. The Denver Nuggets clearly fall into the latter category witness their behaviour last summer. Coach George Karl, who had led the team since 2005, guided Denver to a franchise record 57 wins in 2012-13, earning NBA Coach of the Year honours as a result. But when the Nuggets were upset by the Warriors in the opening round, the Denver brain trust put the kybosh on Karl and sent him packing. Oh, George, don’t forget your trophy and don’t let the door hit you on the ass on the way out. — RR 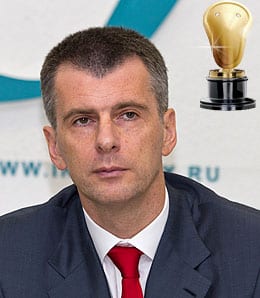 Apparently, money is no object for Mikhail Prokhorov.

Russian billionaire Mikhail Prokhorov must wipe his ass with C notes. How else do you explain how the Brooklyn Nets owner built a team that is paying more in luxury tax (over $87 million) than the actual salary cap of $71.7 million? The mega-deal last summer that brought in Paul Pierce, Kevin Garnett and Jason Terry really blew this team’s payroll into a different stratosphere. But the best part is that despite better recent play, the Nets are still a woeful 15-22, and currently straddling the line of being a playoff or a lottery team. The big guns are Joe Johnson ($21,466,718, who’s touches are down for the fourth straight season); Deron Williams ($18,466,130, who is only getting to the line three times per game and is currently out with ankle injury); Pierce ($15,333,334, who is enduring his worst season ever, and even spent some time coming off the bench for pretty much the first time in his career); Brook Lopez ($14,693,906, who was actually having a better season despite less touches before breaking his foot in yet another season-ending injury for the big man); and Garnett ($12,433,735, who suddenly seems very, very old in suffering through his worst season ever as he manages just one point a game from the charity stripe). Oh man, that’s a lot of underachieving star power Prokhorov has on his hands. Time to send the whole bunch to Siberia. — RR

Now it’s your turn. Who would you have selected differently? Let us know in the comments below.

By RotoRob
This entry was posted on Wednesday, January 15th, 2014 at 8:07 pm and is filed under BASKETBALL, Jake Watroba, RotoRob, RotoRob Awards. You can follow any responses to this entry through the RSS 2.0 feed. You can skip to the end and leave a response. Pinging is currently not allowed.