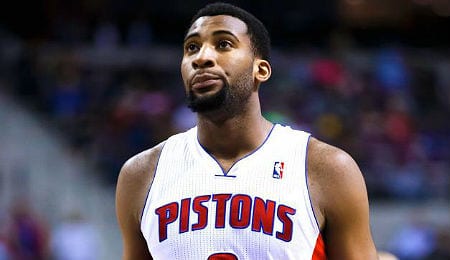 Andre Drummond is likely to take a step forward offensively this season. (Geeksandcleats.com)

Welcome to the 2014-15 RotoRob NBA Draft Kit. This is not only the first article of the kit, but it also represents the RotoRob.com debut of McCade Pearson, our newest NBA writer.

So while you wonder whether the Knicks’ roster is deep enough to do some damage, let’s review our picks for the top 10 sleepers for the Fantasy basketball season.

Finding players that will outperform their draft position is obviously the key to winning your Fantasy basketball leagues. Grabbing that guard in the fifth round who delivers first round value; nabbing that big man in the late rounds who winds up averaging a double-double. Now let’s see if we can help you with that quest with 10 players worth reaching for a bit earlier than conventional wisdom suggests.

1. Andre Drummond, C, Detroit Pistons: Drummond averaging 13.2 rebounds a game is no joke. We don’t care if you play in a category or points league, his boards will help you and his block numbers are pretty good, too. Drummond finished second in the NBA last season with 57 double-doubles. Just think about that for a moment. He’s coming off a summer playing for Team USA at the FIBA, which had a huge impact on him (see video below). We have Drummond easily as a top 25 player, and if you get bonus points for double-doubles he should be top 15. He will probably go in the middle of the fourth round in most 12-team leagues, but we think if you land him a round earlier than that, you’ll still get tremendous value.

2. Ricky Rubio, PG, Minnesota Timberwolves: Rubio is entering his fourth season in the league and several factors suggest a big step forward is coming. The Timberwolves hired a full time coach to help Rubio with his shooting, Kevin Love (and his 18.5 touches per game) is gone, and Andrew Wiggins has arrived as a new weapon for Rubio to grow with. We fully expect Rubio to be given the keys to the offense and to help this team grow around his skills and develop this talented group of youngsters into a good team over the next few seasons. We think his assist numbers will go up, and he’s already a great source of steals. Finally, let’s remember that Rubio is still only 23 years old.

3. Alec Burks, SG, Utah Jazz: Everyone is focused on rookie Dante Exum, Gordon Hayward’s max deal, and new coach Quin Snyder. Well, Richard Jefferson is gone and so is Marvin Williams, so the door is finally open for Burks to get starter minutes. Burks will likely come off the bench and be looking to score a lot of points to give the Jazz bench a boost. He could also start if they think that is the better option. We think it is likely that Burks leads the Jazz in
scoring this season with an average of 18-to-20 points per game.

4. Thaddeus Young, SF, Minnesota Timberwolves: Everyone is expecting Young to regress, but 18 points and over two steals per game for a big man is pretty good. We also expect him to be PF eligible later in the season. Young can score, rebound, and if he can improve his blocks (which he should if he plays PF) he could be a 1-1-1 player. Players who get one trey, one steal and one block per game are huge in Fantasy basketball.

5. Zach Randolph, PF, Memphis Grizzlies: How the heck did everyone forget about Randolph? This guy is still a double-double machine, and is a two time All-Star. Z-Bo has averaged a double-double for eight of the past nine seasons, missing only in 2011-12. He will still be a pretty good Fantasy player this season, so feel free to reach for him because you will know exactly what you are going to get.

6. Nerlens Noel, C/PF, Philadelphia 76ers: After Noel missed all of last season, people don’t know what to expect of him, but we had the opportunity to go to Las Vegas and watch the Summer League and he looked really good. This guy could be a great player with an immediate impact, however he is a very high risk/high reward pick. There are also those injury concerns.

7. Trey Burke, PG, Utah Jazz: Burke has never been the best player from a physical perspective and after a decent rookie season what is there to expect out of the second-year guard? Well, he’s been working with a 6’1″, 180-pound point guard, who also always played with a chip on his shoulder… some guy named John Stockton. We think Stockton will help teach Burke how to play in the NBA as an undersized guard. And that chip on his shoulder? That should help Burke fend off No. 5 overall pick Exum, who could be riding his back looking for a starting job. We expect Burke to use this as motivation moving forward. During the Summer League he looked in much better shape and also displayed improved defensive skills.

8. Jabari Parker, SF, Milwaukee Bucks: The only reason Parker is this low on this list is because we don’t know if you can consider him a sleeper. He will likely become the main guy in Milwaukee and should average 18+ points this season, so will be worth a slight reach. Don’t be scared off rookies because of last year’s draft class.

9. Jared Sullinger, C, Boston Celtics: Sullinger averaged 13 points and eight rebounds per game last season and we absolutely expect these numbers to go up. With Marcus Smart (and possibly Rajon Rondo) feeding him the ball and giving him room, he should be able to average close to a double-double, providing great value to your Fantasy team. Sullinger is a low risk-high reward player if he continues to be drafted where he’s going right now.

10. Samuel Dalembert, C, New York Knicks: As of right now, Dalembert is the third big man in New York, but it would not shock us if he took over the starting job from Andrea Bargnani, yet Bargani will likely still finish games (think a lesser version of Tiago Splitter–Boris Diaw here). If you are in a league that rewards double-doubles, Dalembert could be a solid guy who will have a few of those 10 points, 11 boards, one block games. Consider him a sneaky late flyer pick.

Rudy Gobert, C, Utah Jazz: Gobert didn’t get much playing time last season in Utah, but is expected to get minutes in 2014-15. He earned second team honours at the Las Vegas Summer League while averaging 11.8 points, 9.8 rebounds and 2.5 blocks (this included a 13-9-5 game on 6-for-6 shooting in only 23 minutes). Not too bad of a summer, right? Well, then Gobert went to the FIBA World Cup and led the charge for Spain over the Gasol brothers and Serge Ibaka in the quarterfinals where he looked great and had 13 rebounds. With Enes Kanter in a contract year, Gobert looks like a nice long-term prospect.

Now it’s your turn. Let us know in the comments below which Fantasy basketball sleepers you’re tracking this season.

By McCade Pearson
This entry was posted on Monday, October 6th, 2014 at 11:36 pm and is filed under 2014-15 RotoRob NBA Draft Kit, BASKETBALL, McCade Pearson, Sleepers. You can follow any responses to this entry through the RSS 2.0 feed. You can skip to the end and leave a response. Pinging is currently not allowed.