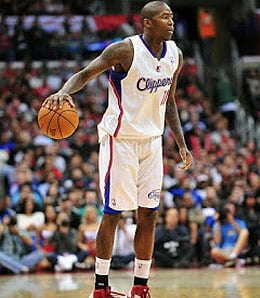 Despite injury issues, the Los Angeles Clippers are unstoppable right now, having won 11 straight — their longest winning streak in over two years.

Given that roll — and the less-than inspiring play by the likely lottery-bound Denver Nuggets — it’s somewhat surprising that the Clips aren’t favoured by more than 4.5 points Monday night in Denver. (For more information, you can check out some of the great NBA lines at Sportbet.com.)

One of the biggest reasons LA is kicking ass lately is power forward Blake Griffin, an honourable mention as the 2013 RotoRob Fantasy Basketball Comeback Player of the Year. On Sunday — which also happened to be his 25th birthday — he just missed a triple double (21 points, 11 boards and eight assists with one block).

The fact that Griffin is really maturing as a player is one of the keys to the Clippers’ run. To watch him distributing the basketball as he did Sunday (see video below) speaks volumes about his growth.

Griffin has been able to log more PT this season, and while his shooting has slipped slightly once again and he’s never developed into a shot blocker, he is enjoying his finest season offensively. More than anything, it’s his consistency — 26 straight games of at least 20 points — that has really stuck out.

It’s been a lost season for the Nuggets, but they had actually managed to string back-to-back wins together before losing by five in Atlanta on Saturday. Kenneth Faried continued his recent offensive surge with 25 points, giving him a three-game average of 25 points. Right now, this dude can’t miss. Over his last six games, he’s canned 59-of-88 (67 per cent) from the field. Lights out, baby!

Hey, if nothing else, this game pits two super scorching power forwards up against each other.

As alluded to above, the Clippers are dealing with some injury woes right now. In the backcourt alone, Jamal Crawford (calf) has been out for the last four games; hot waiver wire choice Darren Collison (stomach virus) missed Sunday’s game; and J.J. Redick (back) hasn’t played in six weeks and could be shut down for the rest of the season.

What would really help Denver make a game of it is if Ty Lawson would snap his recent skid. He’s been in a funk for about a week, but it really came to a head Saturday when he went 0-for-12 from the field en route to a season-low two points in 38 minutes. Lawson has still been dishing the dimes (11 Saturday, and 32 total over the last three games), but his shooting touch has gotten progressively worse over the past few games (2-for-19 in the last two combined… yuck!).

Now it’s your turn. Let us know in the comments below what you think will happen in this game.

By RotoRob
This entry was posted on Monday, March 17th, 2014 at 3:22 pm and is filed under BASKETBALL, Game Preview, RotoRob. You can follow any responses to this entry through the RSS 2.0 feed. You can skip to the end and leave a response. Pinging is currently not allowed.