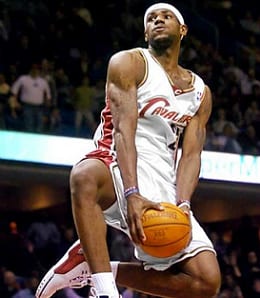 Can LeBron James bring a championship to Cleveland now that he’s back? (Dosomething.org)

We’ve now digested the LeBron James news for an entire 24 hours and we feel the same as we did when news broke about his triumphant return to Cleveland: it’s total bullshit. We’ve been told LeBron is a genius. Really? We’ve been told this is bigger than basketball. Okay, sure, we guess so, even though we’re sure everything Kobe Bryant, Magic Johnson, Michael Jordan, Larry Bird and Hakeem Olajuwon did was actually beyond just playing basketball.

We applaud the essay and how he created “hope.” We won’t even call it false hope because if LBJ does happen to inspire a few kids from Northeast Ohio to go make the most of their lives, good for him. But we all know that even though kids do aspire to be the next LeBron James, he truly has nothing to do with the actual attainment of those aspirations, as parents, coaches and teachers are the true inspirations in a child’s life.

Now let us get back to the basic point of this article. James went back to Cleveland because it gave him the best chance to extend his window for winning championships. King James left his old home that was in need of a total Extreme Makeover Home Edition. His bathrooms were dated, his master bedroom doubled as an office/pantry. Pipes were leaky. The foundation was cracked. Something had to give, so James bolted town for a minute and in came the demo crew to tear it all down and just four short years and three number one overall picks later, they managed to update those bathrooms, replace those pipes and the master bedroom now functions entirely as a place a refuge from a hard days work.

We hate being cynical, we really do, but isn’t it entirely possible that going back to Cleveland cleverly hid the deficiencies in James’ story? The aging Dwyane Wade, who could no longer be trusted to stay healthy enough to deliver his classic Flash game? An aging bench that could no longer produce at the level expected from a championship-calibre team? Perhaps egos? Wanting to be the highest paid player on his own team? Whatever the case may be, it was clear the Heat dynasty was falling and nobody was willing to sacrifice a second time to save it. Not even LBJ, the hero himself, wanted any part of saving those who saved him.

We did forget to mention about the foundation crack in LeBron’s old house, let’s call it the “Dan Gilbert” crack. We’re not sure any amount of money could fix that crack, but it’s patched up… for now.

By the way, Nike didn’t waste any time jumping on a marketing opportunity, did it?

Now it’s your turn. Let us know in the comments below what you thought of LeBron James’ decision to return to Cleveland.

By J.R. Anderson
Tags: Cleveland Cavaliers, LeBron James
This entry was posted on Tuesday, July 15th, 2014 at 8:42 am and is filed under BASKETBALL, J.R. Anderson, Transactional analysis. You can follow any responses to this entry through the RSS 2.0 feed. You can skip to the end and leave a response. Pinging is currently not allowed.