The Wire Troll: Glen Davis Getting His Magic On 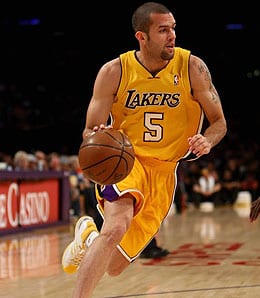 Jordan Farmar is taking advantage of his PT. (Mkrob.com)

As we move into December, the free agency pickings get more difficult as players begin to establish form and playing time. However, The Wire Troll is always on the alert to bring you the most recent advantageous waiver wire acquisitions. Some will be designed to help your team in the short term while others could be long-term plays based on the situation involved (injuries, benchings, lineup changes, etc.).

Jordan Farmar, PG, Los Angeles Lakers: With Steve Nash on the injured list for the forseeable future, Steve Blake and Farmar have filled in admirably. Farmar has especially impressed over the past week averaging nearly 17 points, five assists and one steal per game. The former UCLA standout also shoots the “threeball” well having made 10 of his last 16 (take a look at the video below from Wednesday’s game against his ex-team, the Nets, to get an idea of how quickly Farmar can rack up points thanks to his outside shooting). We don’t have much confidence in Nash going forward, whether healthy or not, so Farmar should be strongly considered in all formats.

Dion Waiters, SG, Cleveland Cavaliers: The biggest trade rumour of the week surrounds Waiters who has reportedly encountered locker room problems with teammates Kyrie Irving and Tristan Thompson. Waiters, the former Syracuse star and fourth overall pick in the 2012 draft, has been reportedly shopped to the Knicks and 76ers among others. On the court this has only served as motivation for him as he’s registered 16 points, three assists and one theft per contest recently. If you’re in need of three-pointers and scoring, Waiters could be a valuable pickup, be it with the Cavaliers or another team.

Nate Robinson, PG/SG, Denver Nuggets: Speaking of spark plugs who can provide instant energy and offense, Robinson makes his season debut on Wire Troll this week. It can be said that Robinson was one of the most valuable players for the Chicago Bulls last season in the wake of Derrick Rose’s ACL injury. Oddly, the Bulls chose not to re-sign him via free agency, so Robinson took his scoring talents to the Mile High City. At the outset of the season, Denver Coach Brian Shaw seemed to scuffle finding the proper lineups and playing rotations, but that has been corrected and the Nuggets and Robinson have been rolling of late.

Manu Ginobili, PG/SG, San Antonio Spurs: We only mention Ginobili because he tends to be a forgotten man in Fantasy circles. Surprisingly owned in less than 50 per cent of leagues, he can still be useful for those in need of scoring and treys.

Glen Davis, PF, Orlando Magic: Big Baby has returned from a long-term injury to add offense and rebounding prowess to the Magic attack. With Tobias Harris unable to recover from a chronic sprained ankle, Davis has stepped in nicely, averaging 12.6 points, six rebounds and nearly two steals per game. Davis should only get better as the season progresses as he’s still not back to full strength and conditioning after suffering that season-ending foot injury in January.

Marvin Williams, SF, Utah Jazz: Williams is best known for being the second overall pick in the 2005 NBA draft, when the Hawks inexplicably took him ahead of star guards Deron Williams and Chris Paul (ugh). Unlike D-Will, Williams has struggled to become the heralded player who achieved success at the University of North Carolina, never reaching his full potential with the Hawks and Utah Jazz. However, there are signs of life since Williams entered the starting lineup and Enes Kanter was relegated to a bench role. Over the past several games, Williams has scored (15 points and two treys per contest), rebounded (six per game) and displayed solid defense (over one steal per game) to become a key component of the Jazz starting five.

Derrick Williams, SF/PF, Sacramento Kings: A hotly debated player in RotoRob.com circles, Williams was traded from Minnesota to Sacramento this week. Never able to escape coach Rick Adelman’s doghouse, Williams will get another chance with the offensively-challenged Kings. Like Marvin Williams, Derrick is an underachieving second overall pick (2011) after starring for the Arizona Wildcats and leading them to the Elite Eight. He made his Kings debut on Friday and scored 12 points while adding six boards and four assists. Watch him closely!

Jimmy Butler SF/SG, Chicago Bulls: Here is a player you must grab despite the fact he’s currently injured. Butler was dropped in many leagues after suffering a foot injury a few weeks ago, but his return is now imminent and with Rose sidelined for the season, opportunity aboundsr. The scoring opportunities and playing time will be in abundance for Butler, who should only improve during his third NBA campaign.

Jason Smith, C/PF, New Orleans Pelicans: Smith has made the most of his playing time and starting role this season. Teamed with Anthony Davis in the Pelicans frontcourt, Smith has registered 10 points, six rebounds and 1.2 blocks per outing. While he won’t win you a Fantasy title, he could certainly be a solid contributor at the all important — and hard to fill — centre position.

Ed Davis, C/PF, Memphis Grizzlies: Due to the recent knee injury suffered by starting centre Marc Gasol, Kosta Koufos (a Wire Troll recommendation last week) and Davis have filled in admirably. While Koufos is the more valuable Fantasy player at the moment, Davis is a nice add for teams in need of rebounding and blocks.

Andray Blatche, C/PF, Brooklyn Nets: Blatche is typically a sixth or seventh man off the bench for Coach Jason “Will Spill Drinks for Time Outs” Kidd. However, Blatche has seen an increase in playing time lately with Kevin Garnett sucking (and getting a game off Friday) and Brook Lopez hurting (although he was back in action Friday). When in the starting five, Blatche can be very productive, so keep an eye on the Brooklyn lineup situation closely.

Now it’s your turn. Let us know in the comments below who your favourite wire pickup of the week is.

By Bob Raymond
Tags: Jordan Farmar
This entry was posted on Saturday, November 30th, 2013 at 3:32 pm and is filed under BASKETBALL, Bob Raymond, The Wire Troll. You can follow any responses to this entry through the RSS 2.0 feed. Both comments and pings are currently closed.