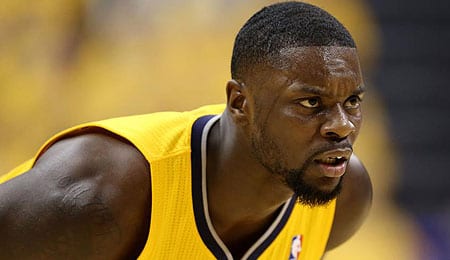 Lance Stephenson would be a great asset for the Bulls. (Brothersonsports.com)

Last week, we predicted where some of the big NBA free agents would land. Here’s Part II of that series.

Usually when a player is in a contract year he is on his best behaviour and does everything in his power not to lose himself money in his next contract. Well most players aren’t Stephenson, the highly-emotional, highly competitive swingman from the Indiana Pacers who was an early-season waiver wire gem.

Not even a minute after the final second burned off the clock on the one of the most embarrassing showings by a number one seed in recent NBA history, the finger pointing began. And when those fingers went around and finally landed on Stephenson, the biggest injustice of the Pacers lost season happened. People became so fixated on the ear blowing (see video below), they lost sight of the fact that he was only one of two players on the entire team that actually stood up to the Heat and refused to simply be just stomped on.

Were his tactics a bit childish? Sure they were! Did he seem to go off the deep end? Absolutely! But wouldn’t being tasked with guarding LeBron James drive anyone a bit batty? However, were those antics alone enough to bury Stephenson as not being a potentially invaluable commodity on a championship-calibre team? Since when does being a little bit crazy make you a bad teammate?

Dennis Rodman was more than a little bit crazy; hell the entire “Bad Boys” Pistons were just variations of Lance Stephenson-crazy. They won championships. Ron Artest, bat shit crazy, helped the Lakers win a title. But Stephenson has what most of those other guys don’t have — all-around skill. He’s not just a rebounder or shot blocker or enforcer, he is a good ball handler and decent scorer. He is a triple double threat every time he hits the floor.

If you need some crazy on your team next year, call Lance.

Should End Up With: Chicago Bulls

Did we mention Stephenson was crazy? You know who else is crazy? Joakim Noah. Coach Tom Thibodeau would have his hands full with Stephenson and Noah both, but no team in the NBA could match the intensity of these Chicago Bulls. Combine these elements with a healthy Derrick Rose and the East doesn’t seem so one-sided anymore.

Stephenson would immediately step up and contribute on both ends of the floor. His potential could really be reached in an environment like Chicago and an uptick in most categories would be expected. Stephenson would still be a triple double threat even with Rose on the floor as Rose is not your prototypical pass-first PG. The level of defense played in Chicago also should bode well for steals.

Will End Up With: Chicago Bulls

We think the Bulls will lose out on both Carmelo Anthony and Kevin Love and also believe Rose comes back at 96 per cent of what he was. We may be in the minority, but that’s never going stop us and we truly believe that Stephenson is more the balls out hustle guy that gave Indiana a glimmer of hope this postseason (along with David West) than he is the ear blowing, locker room poisoning guy that many people want you to believe he is. Indiana will offer him the money, but Chicago will offer him the love.

More of a defensive presence than his Fantasy numbers will ever show, Deng should be highly sought after come July. He is coming off a slightly down season, but that shit happens when Mike Brown is your head coach. A capable wing scorer and an absolute monster when it comes to minutes played, Deng would bring instant veteran leadership and defensive clout to any team lucky enough to sign him.

Should and Will End Up With: Charlotte Hornets

Our surprise pick of last season, the Hornets (nee Bobcats) are rapidly rising up the ranks in the watered down East and the addition of Deng could create some buzz (yes, we went there) that hasn’t been seen in Charlotte since the days of Alonzo Mourning and Larry Johnson. Deng would fit nicely with both Al Jefferson and Kemba Walker in Steve Clifford’s offense, adding another offensive wrinkle and, as noted above, some nastiness on D. No way in hell Miami sweeps Charlotte out of the first round with Deng on this squad.

We would bet Deng returns to pre-Cleveland form and provides a solid scoring option at SF along with his decent rebounding numbers, though he may never approach a 50 per cent FG percentage, he is still an efficient enough shooter to make him worth investing in.

Other Notable Free Agents and Their Likely Destinations

Phoenix will (rightfully so) match any offer sheet for Bledsoe. The dude is just too good and the Suns can’t afford to lose him. You may be able to sway us on the injury concerns if your name was Johnnie Cochrane, but more than likely your argument would come out more like Scott Hoy. Bledsoe will remain in Phoenix and will be at or near the top of your draft boards at the PG/SG positions.

If Charlotte misses out on Deng, then look for it to make a play for Gay as the next best option. Gay is a better scoring option than Deng with similar defensive stats. Playing alongside Walker and Jefferson will only help Rudy’s game and Fantasy value.

We’re sure there are bigger names we could have put here but we bring up Hill because we believe Golden State will move David Lee to make room for a run at Love (either via trade or if for some reason Love hits free agency after next season) and ultimately fail in its attempt to do so. Hill is the perfect high energy guy down low to compliment rising stars Stephen Curry and Klay Thompson. Hill has blossomed into an elite rebounder even in limited minutes and with no demand for the ball any offense he would bring would just be icing on the cake. If you’re looking for a sleeper pick, Hill is your guy.

Now it’s your turn. Let us know in the comments below which NBA free agents you’re tracking and where you think they’ll wind up.

By J.R. Anderson
This entry was posted on Thursday, June 5th, 2014 at 11:19 pm and is filed under BASKETBALL, Free agents, J.R. Anderson. You can follow any responses to this entry through the RSS 2.0 feed. You can skip to the end and leave a response. Pinging is currently not allowed.