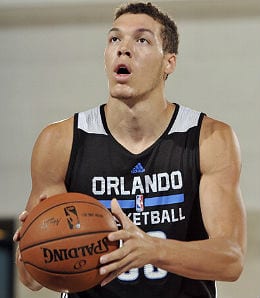 The Magic may have reached for Aaron Gordon with the fourth pick. (Redrockbasketball.com)

The Orlando Magic owned the fourth pick, opting to go with Arizona Wildcat PF Aaron Gordon. Given that he was projected to go around the 10th pick, some felt this was a bit of a reach. Considering Gordon was the first power forward off the board, Orlando felt he was the best selection of the group to fill a very much needed hole in its frontcourt. While he’s drawn comparisons to both Kenneth Faried and Blake Griffin, we feel that is completely off and Gordon is really one of the least intriguing picks in the top 10 — not to throw cold water on this pick completely (we’ll let someone else do that — see video below).

It is entirely possible drafting Gordon was a product of Julius Randle’s reported foot situation — but it’s just as possible the Magic saw something it preferred outright.

The chances of finding a starting gig do not seem all that far fetched and if improvements are made in these areas, this is a role he could sustain due to inefficient alternatives.

Making the transition from College to the NBA as a power forward could arguably be the toughest of all the positions in the league. Gordon has been tabbed a player with good defensive fundamentals, but that was not against men who are 6’8″ to 6’10” and generally weigh 240 to 260 pounds. It is a completely different pool, and one we are not confident the kid has the ability to swim in. The hope is that Victor Oladipo channels his inner Chris Paul and this tandem will help Orlando become Lob City East.

If the expectations are two or three alley-oops a game while the team is getting buried by 12 or more points per game, then yeah, we can see that being a silver lining… just not one conducive to winning.

At this early stage in Gordon’s career, it’s going to take more than YouTube videos of him posterizing fools on a collegiate level for us to recommend drafting him. Like any player with the opportunity to start, he could materialize into a prosperous add down the stretch… but even that is extremely hard to envision. In a redraft league, you’re better off using your later round picks on second and third year players ready to make the push into further Fantasy relevance.

In a keeper format, just walk away — there is nothing to really see here.

Now it’s your turn. Let us know in the comments below what you’re expecting out of Gordon this season and long term.

By Steve Krebs
Tags: 2014 NBA Draft
This entry was posted on Monday, August 18th, 2014 at 11:31 pm and is filed under BASKETBALL, Draft report, Player profile, Scouting Report, Steve Krebs. You can follow any responses to this entry through the RSS 2.0 feed. Both comments and pings are currently closed.