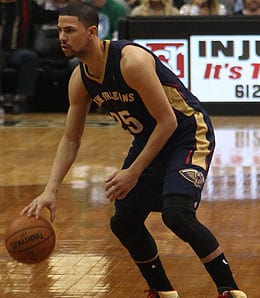 Austin Rivers has been a bit better as a sophomore.

Austin Rivers, PG, New Orleans Pelicans: The son of Clippers coach Doc Rivers has shown improvement after a disappointing rookie campaign in 2013 (we wonder if Austin still feels the same as he did in the video below from the 2012 draft day). With Eric Gordon and Anthony Davis shelved for the season, Rivers (who also missed time recently) will see sufficient playing time to be effective statistically. If you’re in need of scoring, assists and treys, don’t hesitate to grab Rivers.

Patty Mills, PG, San Antonio Spurs: With Tony Parker nursing back spasms and Coach Gregg Popovich resting players at will, Mills will see more action over the final week. He has been one of the most improved players in the NBA after losing appreciable weight during the offseason. Earlier this week he registered 26 points, six treys and six assists versus Dallas.

Jordan Farmar, PG, Los Angeles Lakers: Farmar has spent more time on the injured list than the court this season. However, when healthy, he’s been a productive member of the Lakers backcourt. With Kendall Marshall currently slumping, Farmar should be the point guard of choice over the final days.

Louis Williams, PG/SG, Atlanta Hawks: In the wake of tearing his ACL last year, Williams has struggled with offensive consistency. However, with Atlanta looking to clinch the final playoff spot in the Eastern Conference, he figures to see plenty of court time and the Hawks certainly need his scoring touch.

Corey Brewer, SF, Minnesota Timberwolves: Brewer is a statistical jack of all trades and a great player to have on your Fantasy bench. Over the last three games heading into Friday, he’d recorded 13 steals, while averaging 12 points and two treys. Oh, and there was that 51-point explosion Friday. Don’t expect to see that again, but kudos to you if you had Brewer active.

Khris Middleton, SF/SG, Milwaukee Bucks: Like Brewer, Middleton is a player that covers all Fantasy categories but possesses more offensive firepower. He’s averaging 18 points over the last games while shooting 11-for-11 from the charity stripe. With Eryan Ilyasova and Nate Wolters done for the season, Middleton will certainly get his touches.

Mirza Teletovic, PF, Brooklyn Nets: With Paul Pierce nursing a hip pointer and resting up for the playoffs, Teletovic will see plenty of court time. Teletovic is a deadly three-point shooter, having canned five against Orlando earlier this week.

Timofey Mozgov, Denver Nuggets: Oh what a night it was for Mozgov on Thursday against Golden State: 23 points and a whopping 29 rebounds. “Tina Fey” has been much improved this season and should be on your watch list for next season’s draft.

Jeff Withey, New Orleans Pelicans: With the aforementioned Davis sidelined, the rookie from Kansas is getting the chance to develop his NBA game. Withey scored a career high 17 against Phoenix this week and is known for shot blocking as well.

Kelly Olynyk, Boston Celtics: Olynyk has shown promise in his rookie campaign but (unsurprisingly for a young big) consistency has been another story. He’s averaging 11 points, seven boards and one rejection over his last four outings. The fact that Kris Humphries is unlikely to see the court again this season should provide a boost to Olynyk’s Fantasy value.

By Bob Raymond
This entry was posted on Saturday, April 12th, 2014 at 6:35 pm and is filed under BASKETBALL, Bob Raymond, The Wire Troll. You can follow any responses to this entry through the RSS 2.0 feed. You can skip to the end and leave a response. Pinging is currently not allowed.