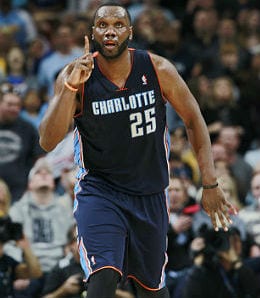 The 2014-15 RotoRob NBA Draft Kit moves forward today with a cheat sheet. So while you wonder whether Dion Waiters can back up his claim that he and Kyrie Irving are a better backcourt that Washington’s John Wall and Bradley Beal, let’s take a look at the top 48 big men in the game.

1. DeMarcus Cousins, Sacramento Kings (7): Cousins’ major breakthrough came one season after most expected. He improved his numbers across the board, bouncing back in steals, but also committing more turnovers than ever before. The fiery and often immature Cousins’ goal this season: a maximum of five technical fouls. We wouldn’t bet on him achieving that one (although he did show some restraint at the 2014 FIBA Championship — see video below). Still, Cousins is the new king of 20 point, 10 rebound games.

2. Al Jefferson, Charlotte Hornets (4): We’re expecting Jefferson to have a bit more space this season thanks to rookie Noah Vonleh. After three seasons in Utah, Big Al took his game to Charlotte last season and wound up enjoying one of the best efforts of his career. Jefferson’s PT was up and he shot a bit better from beyond the arc (although this is still a tiny part of his game), however, his touch from the line regressed after a career-best showing two seasons ago. Still, he had his best scoring and rebounding showing in five seasons.

3. Chris Bosh, C/PF, Miami Heat (12 at PF): Bosh saw less PT for the third straight season, but now that LeBron James is gone, Miami will rely on CB4 much more. A tremendous FT shooter for a big man, Bosh doesn’t get many blocks, but he did average a steal per game for the first time last season, just missing out on the exclusive one-trey, one-block, one-steal per game club.

4. Joakim Noah, Chicago Bulls (9): A guy Mark Strickland says reminds him of himself, Noah’s knee is a concern as we head into this season. However, this fan favourite stayed healthy last season and became a bigger part of the offense (although he didn’t shoot quite as well as usual). It’s clear that Noah’s offensive upside is limited to baskets within the flow of the game, but he can help in so many areas that we’re willing to overlook his shortcomings.

5. Andre Drummond, Detroit Pistons (18 at PF): Surprisingly, the Pistons did not ease their big man issue and wound up re-signing Greg Monroe. Drummond wound up finishing second in rebounding with Monroe and Josh Smith on board. Just imagine what he’d do with one of them gone. Drummond became a full-time starter last season and morphed into a much larger part of the Detroit attack.

6. Al Horford, C/PF, Atlanta Hawks (2): A leader on a franchise in desperate need for a spark, Horford is coming off yet another injury-ravaged season. He’s taken his game to a new level the past two years, and even though he saw less PT last season, he was nearly as productive as he got more touches than ever. We’d love to see Horford get to around three points per game from the line — that will help him return to elite status.

7. Dwight Howard, Houston Rockets (3): In his first season with Houston, Howard again had some injury issues, including an ankle sprain in March. Overall, he bounced back somewhat, although his trips to charity stripe dipped for a third straight season.

8. DeAndre Jordan, Los Angeles Clippers (25): The durable Jordan, winner of the 2014 RotoRob Dunk of the Year Award, enjoyed a major breakthrough, getting way more PT, scoring more points from the line, leading the association in boards and shattering his career highs in blocks and steals. He’s become a staple in a very deep Clipper frontcourt.

9. Marc Gasol, Memphis Grizzlies (1): A former NBA Defensive Player of the Year winner, Gasol has long ago stepped out from big brother Pau’s shadow to become a force onto his own. Last season, he continued to average a steal per game, and managed to get into less foul trouble, but his overall numbers dipped a tad as he lost about a quarter of the season to injuries.

10. Nikola Vucevic, C, Orlando Magic (10): Many were expecting Vucevic to explode last season, and while that didn’t happen, he did show modest growth despite missing 25 games. His rebounding dipped and he got in more foul trouble, but picked up his offensive game.

11. Brook Lopez, Brooklyn Nets (5): Part of a very expensive Net squad, Lopez was enjoying a nice bounce back season that was unfortunately cut short by yet another foot injury. His touches have dipped for three straight seasons, but he made up for that by scoring more points at the line than ever before. Lopez’s rebounding dipped, but it’s something he plans to specifically work on this season, so let’s hope that translates into a return to the eight boards per game level.

12. Nikola Pekovic, Minnesota Timberwolves (12): Despite some issues staying healthy, Pekovic continues to improve. Last season, he became a bigger part of the offense and capitalized, sinking more shots and improving his touch. If only he blocked shots, he’d be a real Fantasy force.

13. Marcin Gortat, Washington Wizards (21): Heading into the season, we wondered whether Gortat would bounce back with the move to Washington. The answer was a resounding yes as he stayed healthy and — being used almost exclusively as the starter — his rounding numbers bounced back close to double digits and he wound up with a career-best 37 double-doubles. Small wonder the Wizards opted to re-sign Gortat.

14. Roy Hibbert, Indiana Pacers (8): Given the personnel losses the Pacers face this season, they desperately need Hibbert to turn things around after two straight seasons of regression. Last season, he actually showed some touch from beyond the arc (mind you, it was only based on five tries) and he enjoyed his finest season at the line. But his rebounding — particularly on the offensive end — took a bath and he only managed 15 double doubles.

15. Omer Asik, New Orleans Pelicans (14): Asik is a dude we recommended as a waiver wire pickup in late-March, and it was a superb pick as he was dominant in April, averaging almost 11 points with 14.6 boards per game. Gone from Houston now, he’ll get a chance to start again now that he’s in the Big Easy. Last season, Asik regressed in a lesser role as his touches were way down and all his numbers suffered until late in the season. But take a look at 2012-13 as a baseline of what he’s capable of.

16. Jonas Valanciunas, Toronto Raptors (13): We pegged Valanciunas as a sleeper last season, and it was a good call, as the Lithuanian took a big step forward is his sophomore campaign. He became a full-time starter, really improved his rebounding (especially under his own basket), and wound up producing 25 double-doubles. Now that Valanciunas has established such chemistry with his fellow Raptor starters, expect another season of improvement.

17. Robin Lopez, Portland Trail Blazers (30): In mid-November, we recommended Lopez as a waiver wire pick and it turned out to be a stellar call as he got better and better all season. The durable big man did a better job of getting to the line and he emerged as a force on the glass — especially on the offensive side of the floor. Lopez even improved his turnover rate despite the big bump in PT. Toss in an improving block rate, and you’re looking at the Blazers’ new defensive rock.

18. Larry Sanders, Milwaukee Bucks (6): Last season was a nightmare for Sanders, as he struggled with injuries and ineffectiveness. After a breakout campaign in 2012-13, he only made 20 starts last season and his touches were down. Sanders is way too talented to write off. Minor surgery will cost him the preseason, but he’s excited to work his way back to being a Fantasy contributor.

19. Derrick Favors, Utah Jazz (14 at PF): Favors’ continued improvement is one of the keys to the Jazz turning things around. He became a full-time starter last season and maintained his steady ascension into a Fantasy force, doing a much better job on the glass — especially under his own basket. We’d like to see Favors block more shots, but his overall improvements, which included 25 double-doubles, were good enough for now. Don’t be shocked if he winds up hoisting a few more treys this season despite going 0-for-6 in his career to date.

20. Spencer Hawes, C/PF, Los Angeles Clippers (26): Hawes was more or less a full-time starter last season, but now he’ll come off the bench for the Clippers. It’s a tough blow considering he enjoyed a career season, but he landed in a place where he can win, and that counts for something. Last season, Hawes turned more touches into more field goals while continuing a trend begun two seasons ago of accumulating more points from the line.

The Wire Troll: Tyler Hansbrough Getting Hot off the Bench

He hasn’t exactly been lights out with his shooting touch in the past couple of games, but with an average of 13 FGA over the past two, he’s getting enough looks to do some damage (17 PPG after the Italian guard scored 14 Friday to help the Hornets to a rare win). Better yet, Belinelli hasn’t been merely settling for three point shots, and has gone to the line six times in each of the past two games – sinking 11 of his 12 attempts. With double digit scoring in 11 of his last 12 games, Belinelli is offering as close to consistent Fantasy value as we’ve seen from him, so ride the hot streak while you can.

By RotoRob
Tags: Kyrie Irving
Posted in BASKETBALL, RotoRob, The Wire Troll | Comments Off on The Wire Troll: Tyler Hansbrough Getting Hot off the Bench