Pedro Martinez: The End of an Era 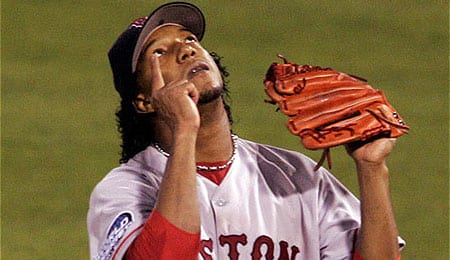 Pedro Martinez was at his best with the Boston Red Sox.

So we finally got definitive word last weekend that Pedro Martinez is done. For those of you whose memory banks don’t stretch beyond a year or two, Pedro was all that back in the day. He was putting up ridonculous pitching numbers in an era when offense still ruled the roost. Yes, that’s right, Martinez was a rare Fantasy pitching stud in the ‘roids era when home run records toppled.

He started his career pitching in LA with his older brother Ramon, but the Dodgers always thought the slighty built righty wouldn’t have the endurance to be a starting pitcher. Oops.

There’s no doubt his frame didn’t exactly scream “power pitcher,” but the Dodgers made a horrible misjudgement here, dealing him to Montreal for Delino DeShields before the 1994 season. Oops.

DeShields struggled in his three seasons in LA, while Pedro was just getting going. He laid the groundwork for a brilliant career with those four years in Montreal, especially in his final season there in 1997 when Martinez broke through with 17 wins, a 1.90 ERA, 0.93 WHIP, 305 strikeouts in 241 1/3 IP, 13 complete games and four shutouts.

That phenomenal effort bagged him his first Cy Young, the only Expo ever to win the honour.

Let’s put that season in perspective. The 13 CGs was a mind-blowing number for anyone, never mind a small righty who’s endurance was always questioned. Oh, and the last time a righty had recorded an ERA below 2.00 with at least 300 strikeouts? Walter Johnson in 1912. Perhaps you’ve heard a thing or two about him.

But of course, these were the Montreal Expos, which means that any real talented player had to be moved before free agency approached. So after that season for the ages in 1997, Martinez was dealt to the Boston Red Sox for Carl Pavano and Tony Armas, Jr. in one of the best trades the BoSox ever completed.

Over his seven seasons in Beantown, Martinez earned two more Cy Young awards, made the All-Star team four times and won the pitching version of the Triple Crown in 1999.

In his first season with the Sox, Martinez’s strikeout total – as you’d expect with a move to the AL – dipped somewhat, but he still bagged a new career-best with 19 wins and had an excellent ERA (2.89) and WHIP (1.09).

In 1999, he was off the charts good and put together his best season ever, going 23-4 with 313 strikeouts, a 2.07 ERA and 0.92 WHIP. With his second 300-strikeout season, Martinez joined a very select group of pitchers in the modern era. In fact, he’s one of just eight hurlers to have multiple seasons with at least that many whiffs, joining a group that includes Nolan Ryan, Randy Johnson, Sandy Koufax, Rube Waddell, Walter Johnson, Sam McDowell, J.R. Richard and Curt Schilling. Of that dream team, only Pedro was under six feet tall. Like I said, short power righties that have enough endurance to put up those kinds of numbers as a starter are a rarity.

Martinez actually lowered his ERA (1.74) and WHIP (0.74) in 2000 with career-bests in both cats, but he “only” won 18 games with “just” 284 strikeouts. To put that ERA in perspective, consider that the park-adjusted AL ERA was 4.97 that season. No one has ever enjoyed such a disparity between their ERA and the league average. His 0.74 WHIP was the lowest in modern baseball history.

During this run from 1999 to 2000, Martinez etched his name in the record books several times: how about 10 straight starts with at least 10 strikeouts? Only three pitchers have even had as many as seven straight starts like that. Or how about 40 straight innings with at least one K? That’s a record. And then there’s the 10 starts in his career in which he’s had 15 or more whiffs. Only Nolan Ryan and Randy Johnson had more 15-K starts.

Who can forget Martinez’s gutsy performance in Game Five of the 1999 ALDS when the hurting hurler came on in emergency after three innings and tossed six no-hit innings despite the fact that his fastball at the time could barely crack a pane of glass? It was a legendary outing that forever etched him into Red Sox folklore.

In 2001, Martinez started to break down and was limited to 18 starts because of a rotator cuff injury. Although he remained dominant for a couple more years, he never again came close to that 1999-2000 level.

After helping the BoSox end their 86-year World Series drought in 2004, Pedro bolted to the Mets as a free agent. He was excellent in the first year of his four-year deal, but only made 48 starts combined over the final three seasons of the contract.

In 2009, Martinez signed a mid-season deal with the Phils, making nine starts down the stretch and pitching well, but after the postseason, he never again reappeared on a big league mound. Most assumed that Martinez would again be a hired gun in 2010, but it never happened, and he finally ended any faint hope of a comeback with this weekend’s announcement that he was done.