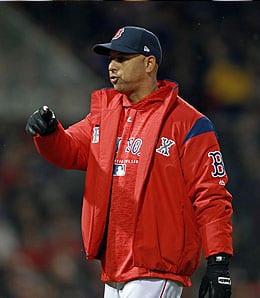 It should come as no surprise that the Boston Red Sox, in the midst of a historic season, are the odds-on favourites to win the 2018 World Series.

What is somewhat surprising, however, is that the three teams most favoured to win it all reside in the American League. Even though only one can reach the Fall Classic, the Red Sox (+325), Astros (+450) and Yankees (+700) have been the class of the majors from opening day, as evidenced by the fact that they boast MLB’s three best run differentials (+206, +221, and +154, respectively).

All three are also locks for the playoffs, but you can’t say the same for any NL team save the Cubs, who are not so coincidentally the biggest NL favourite (at +750) that many betting fans will be looking to. That’s why knowing some of these expertly reviewed offshore betting sites to choose from have you covered when it comes to crunch time — so be sure to check them out now that we know who the clear favourites are.

Let’s take a closer look at the four faves.

Even though Boston has shockingly hit a rough patch lately (2-6 over the last eight, including three straight losses heading into Tuesday), it’s retained a healthy lead in the AL East over the second place Yankees.

In fact, the BoSox were just swept for the first time all season, thanks to the surprising Rays. Manager Alex Cora has this team rolling, reaching 90 wins before any other club has even won 84. Even so, many believe Cora may not be Manager of the Year (see video below).

As long as Boston can steer clear of Blake Snell (1.04 ERA in four starts against Boston this year), it seems no one can beat this team.

Still, after getting outscored 24-5 by Tampa Bay in the three-game sweep, it feels like the window has inched open ever so slightly for the rest of the pack.

Which brings us to the Yankees, who are just as hot as the Rays lately, pulling within 6.5 games of Boston. Over the span of eight days, New York shaved 4.5 games off the Red Sox’s lead, setting up a much more fascinating final five weeks of the season.

Rookie 2B Gleyber Torres continues to amaze, on Monday smacking his 20th homer while swiping his second base in the last five games. He’s quickly become an invaluable component of the Yankees lineup at the tender age of 21.

Speaking of young stars, Aaron Judge (wrist) is finally making some progress, so he should soon return to action to help the Yankees try to make things interesting in September.

Without a doubt, Manager Aaron Boone has gotten more out of this Yankee squad than many expected.

Of course, we can’t forget about defending champion Houston, can we?

With six straight wins, the Astros have managed to increase their tenuous AL West lead to 2.5 games over the A’s, who are the season’s biggest surprise and a team that clearly is not going away.

Houston is finally more or less healthy at the absolute right time and it obviously knows exactly what’s needed to close this thing out. While Boston has been the best team in the majors this year, it would be easy to make a case that the Astros are even better.

Third baseman Alex Bregman is carrying this team right now, delivering four hits (including a three-run jack) and driving in four runs on Monday, running his hitting streak to eight games, half of which have featured multiple hits.

Many expected Bregman to hit more than the 19 homers he put up in his first full season last year. With 25 already in 2018, he’s delivered on that promise. He doesn’t have as many swipes this year, but has become a much bigger asset in OBP leagues as he develops into a more complete player.

As if the Astros’ attack wasn’t potent enough, even Tyler White has forced his way into an everyday role with his recent play for Houston. He had two hits, including a homer, and drove in four runs on Monday, and has been doing a much better job of drawing walks this year — something he excelled at in the minors. White is suddenly worth grabbing in AL-only and deeper mixed leagues.

Finally, we have the Cubs, the NL’s best bet to emerge as champions.

While the Cards are making them sweat, the Cubs remain as hot as any NL team, and their recent play has provided a bigger cushion over Milwaukee, which is another squad that has surprised many with its play this season.

Even with talk that Manager Joe Maddon is on the hot seat if Chicago doesn’t make some noise in the playoffs, it’s full steam ahead for this team. Starter Jon Lester wasn’t at his best Monday, but did throw a quality start and seems to have righted the ship after a troublesome run at the end of July and into mid-August.

He’s been a little harder to hit this season and perhaps has had his share of good fortune to go 14-5, but he seems to just keep getting the job done. And given how superb Lester has been in the playoffs in his career (2.55 ERA with nine wins in 25 games, including 21 starts), the Cubs are really going to rely on him this fall if they hope to avoid Maddon getting the axe.

Now it’s your turn. In the comments below, let us know who your pick for the 2018 World Series Champion is.

Monday night, Pena gave the fans a glimpse by falling just a double short of the cycle. The book on him with the Reds was always “geez, what would this kid do with 500 at-bats?” Well, we’re not going to find out this year, but BoSox fans should quickly warm to this behemoth of a man who’s still just 24 and definitely has some 40-HR season waiting to emerge in that bat of his.