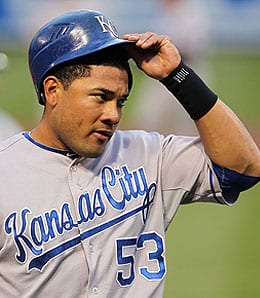 Melky Cabrera as a must-own player? Strange but true.

Right from the start of the season, Melky Cabrera surprised us. His one and only season in Atlanta last year was an unmitigated disaster, but he sure has looked good since returning to the American League this season – especially from a power perspective.

As part of Manager Ned Yost’s most recent tinkering, in the past few games Cabrera has taken over the lead-off spot in the Kansas City lineup, which should help his runs total (he scored one run off two singles on Sunday).

Cabrera is hitting with more power than ever, he’s stealing bases more frequently, his BA is up and he’s even making defensive gems and throwing baserunners out (he’s second in assists among centre fielders).

For KC, the timing couldn’t be better for Cabrera’s bounce back season. This organization is in the midst of seeding the big league club with more young talent than it’s ever seen, so Cabrera makes a prime trade chip. Don’t think for a minute that the Royals won’t try to capitalize.