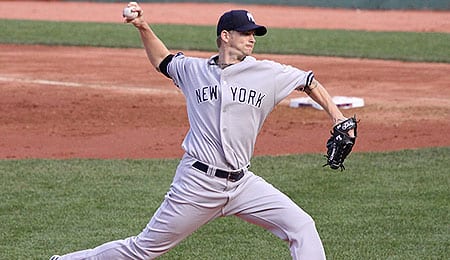 Did A.J. Burnett earn his keep in his first season as a Yankee?

The first season of the five-year, $82.5-million deal the Yankees gave A.J. Burnett just over a year ago is in the books, so how does the contract look so far?

Obviously, it’s a tad premature to judge the overall value of this deal, but two things we definitely know at first glance are that the Yankees have to be happy considering they won the World Series, and the Toronto pitching staff really missed Burnett’s contributions.

Burnett was inconsistent at best this year, at times looking brilliant, and at times suffering from serious bouts of wildness that led to 10 hit batsmen, and career highs in both wild pitches and walks. He was also shelled for a career-high 25 homers, and no, it wasn’t just about the launching pad the Yankees call their new home (just 13 of the dingers came at Yankee Stadium vs. a dozen on the road). He endured two long droughts (April 14-May 27, July 27-September 7) without any wins, which is shocking and unacceptable when you’re backed by one of the game’s best offenses.

Take Burnett’s performance in his two World Series starts as a perfect microcosm of his season. In Game Two – when the Yankees absolutely needed him, having been shocked at home in Game One – Burnett delivered in a big way, tossing four-hit ball and fanning nine over seven tidy innings for the win. If he did nothing else all season, you could argue that Burnett justified his contract with that game.

Then came Game Five in Philadelphia, with the Yankees having a chance to put the series away. They again sent Burnett to the mound, but a completely different pitcher showed up that day, as he was ripped for four hits, four walks and six runs in just two innings as he suffered the loss.

Two starts on the sport’s biggest stage, with two vastly different results. Such was the season of A.J. Burnett.

Yet despite the wildness, gopheritis and a significantly reduced strikeout rate Burnett dealt with this year, he actually managed to lower his ERA from 2008. Clearly, he pitched better than his record (13-9) would indicate.

After racking up a career-best 231 strikeouts in 2008, Burnett’s K/9 dipped almost a full strikeout, yet he just missed out on a second straight 200-strikeout season, so it’s not as if he was not dominant.

And the hitter haven of Yankee Stadium wasn’t the issue either; in fact, Burnett was actually much sharper at home (3.51 ERA) than on the road (4.59).

But the inconsistency was an issue all year long. Burnett had a slow start over the first couple months of the season before getting on a major roll in June and July. August, however, was his ugliest month of the season, before he settled down for a decent September/October.

Of course, any recovery is contingent upon Burnett sharpening his command – regardless of how good his hit rates are, he can’t continue to be that wild and hope for success.

The biggest concern I have with Burnett is that while he was quite sharp against left-handed hitters (655 OPS), righties racked up an OPS of 815 against him. That’s a worrisome trend.

The bottom line is you can expect Burnett to win a couple more games, and perhaps crack the 200-strikeout mark once again, but in terms of ERA and WHIP, it’s unlikely we’re going to see any improvement from the soon to be 33-year-old.

By the time this contract is nearing its second half, it has the potential to be somewhat albatross like. Boston, which gave a virtually identical deal to John Lackey this week, is far more likely to be pleased with its investment over the long haul.

But then again, the Yankees got their freaking Series win, didn’t they? The bastards…

By RotoRob
Tags: A.J. Burnett
This entry was posted on Wednesday, December 16th, 2009 at 9:41 am and is filed under BASEBALL, RotoRob. You can follow any responses to this entry through the RSS 2.0 feed. Both comments and pings are currently closed.