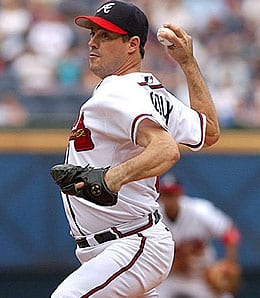 The Yanks’ rotation is bringing back memories of Atlanta’s Greg Maddux-led pitching staff.

The Yankees are off to a great start, winning over two-thirds of their first 25 games, a pace bettered only by the Tampa Bay Rays among American League teams. The Yanks’ early surge has allowed them to open up a four-game lead in the American League East. And the fact that almost five-eighths of their schedule has been on the road makes their record to this point even more impressive.

Of course, none of that is particularly surprising.

What is raising eyebrows, however, is the fact that the Yankee pitching – especially their starting rotation – is so dramatically improved so far.

In fact, Joe Girardi’s starters have shaved a full run off their collective ERA from last season.

On offense, Alex Rodriguez is struggling of late, going just 4-for-25 in the past week, while Derek Jeter had been scorching, hitting in five straight games (four of them multi-hit efforts) before taking an 0-fer Monday night as he continues to prove that last season’s resurgence was not a fluke.

But it’s the pitching that has Fantasy owners drooling. The top four starters (C.C. Sabathia, A.J. Burnett, Andy Pettitte and Phil Hughes) have combined to go 13-1, and for most part, the Yankees have dominated in those wins. In 20 combined starts, this quarter has given up just 34 earned runs. Woah.

They have a strikeout-walk ratio of better than two to one, and have surrendered a mere 100 hits in 145 IP. The last time we saw a foursome like this was in the early ‘90s when Atlanta’s rotation featured Greg Maddux, John Smoltz, Tom Glavine and Steve Avery. And the last time the Yankees had anything like this was during their unbelievable 1998 season – the year they won 114 games. Petttitte was a young buck in that rotation and it also included a pair of wily veteran Davids – Cone and Wells.

What’s really amazing is that the current Yanks rotation is this improved even though Javier Vazquez – as he did the last time he pitched in pinstripes – is absolutely sucking. Actually, the way Vazquez is going this time around, he’s making Yankee fans pine for the pitcher who recorded a near-5.00 ERA for New York in 2004.

In four of his five starts, Vazquez has been downright brutal, and he was almost passable in the fifth. And I don’t think there’s a coincidence that his only remotely decent start came away from Yankee Stadium. Clearly, New York doesn’t bring out the best in Vazquez. I mean, his 20 strikeouts in 23 IP suggests he’s not hurting, so the problem is either mechanical or psychological. And given that last season in Atlanta was the best of his career, I think it’s all in his head. There’s something about being in a New York state of mind that doesn’t do it for Javy.

At any rate, the Yanks are giving him an extra couple of days off between starts to get his head together. If you’re seeking a buy-low candidate, Vazquez could be your man, but temper your expectations on how far he’ll bounce back. He’s winding up on plenty of waiver wires, but if you still own him, all you can do is park him on the bench and try to move him once he strings together a couple of decent starts.

Now how about the rest of this vaunted Yankee rotation?

Sabathia was roughed up in his season debut, but has tossed five straight quality starts since then. Okay, so he’s not striking out as many hitters as he did last year and the walks are up (that’s a bit of a worrisome combo), but Sabathia has managed to lower his WHIP and ERA thanks to better hit rates. Bear in mind that he’s been a much better second-half pitcher over the past few seasons, so Sabathia could find himself very much in the Cy Young mix by season’s end.

Burnett has looked even sharper, tossing shutout ball in two of his last three outings. He’s been injury free the past couple of seasons, but what’s different this year is that Burnett seems to be pitching to contact more, and it’s working big time. His strikeouts are way down, but so are his walks, and as he gets through his innings quicker, it’s reasonable to expect Burnett’s win total to shoot back into the high teens this year. It’s a tradeoff that Fantasy owners will likely accept, and one that’s a huge bonus for 4×4 owners.

Pettitte, meanwhile, seems to have found the fountain of youth. Until his last start, he hadn’t given up more than two earned runs in any of his outings. Also very durable in recent years, Pettitte has seen his strikeout rate dip slightly for the second straight season, but his hits and walks are down dramatically, and that means way better results. In fact, you’d have to go back to when he was in Houston in 2005 to find Pettitte with a better WHIP.

The other newcomer to the rotation and the biggest difference maker so far is Hughes, who started last season in the rotation, but early on was converted into a set-up man with much better results. Back in the rotation this year, Hughes is not only proving he belongs, but early on he’s been the best of a splendid group of starters. For freak’s sake, the dude is holding opponents under a .125 BA. Yikes.

However, I’m worried about him wearing down in the second half, as he’s never pitched more than 86 IP in a major league season – a number Hughes is sure to approach before the halfway point in the season – so this is something to monitor as the campaign progresses. If I owned Hughes, I might think about selling high before July rolled around.

By RotoRob
This entry was posted on Tuesday, May 4th, 2010 at 1:16 pm and is filed under BASEBALL, RotoRob. You can follow any responses to this entry through the RSS 2.0 feed. You can skip to the end and leave a response. Pinging is currently not allowed.