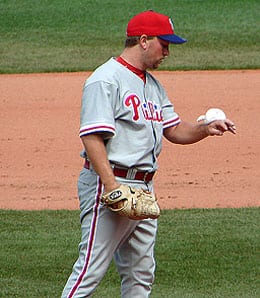 So that was the Philadelphia offense I had heard so much about.

You figured the Phils would enjoy this pit stop in Toronto, considering they managed to avoid Roy Halladay.

But the Phillies’ bats were in absentia most of the weekend, dropping the first two games without so much as a whimper from their supposed mighty lumber. On Sunday afternoon, however, they finally erupted to the tune of 11 runs and 17 hits, good enough to beat the Jays into submission 11-6 and avert the sweep.

Of course, wouldn’t you know it that the fireworks came against the top pitcher they had to face in the series? With A.J. Burnett on the mound, squaring off against Aaron Fultz, the matchup looked like a mismatch.

After all, Burnett has been lights out since coming off the DL, while Fultz had never before started a major league game in his seven seasons in the bigs. In fact, Fultz had never pitched more than three innings in any outing, so it wasn’t a big shock when he was lifted after recording just five outs and throwing a mere 41 pitches.

The book on Fultz: he’s essentially a two-pitch pitcher, with a fastball that ranges from 83 to 87 mph and a changeup that sits in the 69 to 79 mph range. He mixed in a couple of 80 mph sliders in the second inning, with poor results. In 1 2/3 IP, Fultz surrendered four hits, three runs and two walks while fanning a pair. I wouldn’t be rushing to scoop him off the waiver wires.